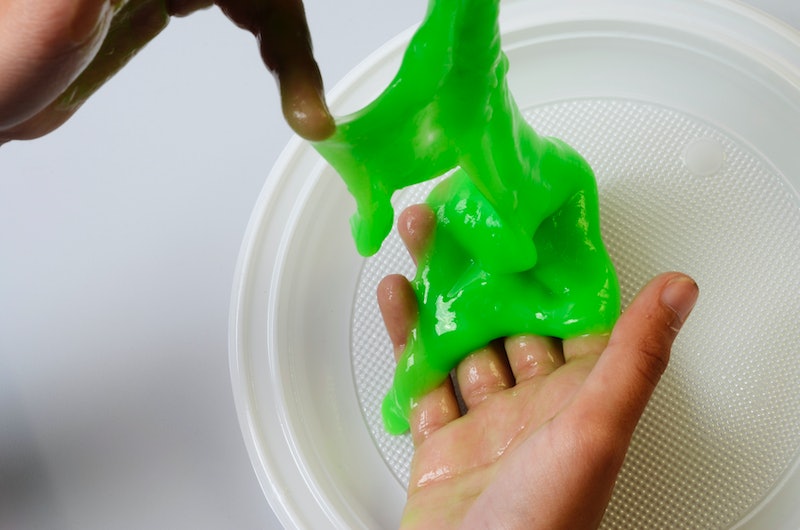 Uh… sorry about all the clean-up, Mom and Dad.

I suspect that our fascination with all things ooey and gooey had more than a little to do with the slime-centric platform of Nickelodeon. From what I gather, the actual recipe of slime has varied over the years; particularly in the earlier, more flying-by-the-seat-of-your-pants years of the network, it might have included anything ranging from vanilla pudding to baby shampoo. We didn’t really care much what it was actually made of, though — we just wanted to see it land on someone’s head. Which it did. Often.

Given our deep and abiding love for watching someone get slimed live on television, then, it’s perhaps unsurprising that we loved finding ways to get that same spirit of messiness into our everyday lives — and what better way to do that than with the toys we played with? Some of them were even made by Nickelodeon, but slimy, gross fun was pretty much the defining feature of the decade, so everyone got in on the action.

Here are 10 of the best and messiest toys we played with in the ‘90s. Because you’re never too old to get your hands dirty.

Of course. In the world of Nickelodeon toys, Gak is probably the most beloved — but since Nick was known for sliming everyone and anyone, it’s only to be expected that they’d also create a toy that was basically slime in a can. I'm cheating a little here, as Slime's initial release occurred in the '80s; it did, however, make its way into the early years of the '90s, too, though, so it's still fair game as far as I'm concerned. You can still get a version of it today, too.

Slime-like toys didn’t just come in cans, though; they also came in elaborate playsets. The Captain Planet Toxic Sludge Dump set was one of them, although it was far from the only one out there — the Ninja Turtles had the Flushomatic Ooze playset, which was functionally similar, for example — but Captain Planet is one of the few nostalgia-inducing franchises that pretty much both lived and died in the ‘90s, so let’s keep our focus there for now. Produced by Tiger in the early ‘90s, it let you put your favorite eco-heroes in peril of being polluted with toxic sludge — after which, of course, you’d run to their rescue, because with your powers combined, you were Captain Planet. Good times.

Combine Creepy Crawlers with an Easy Bake Oven, and you have something resembling Doctor Dreadful Food Lab: A series of playsets that let kids make gross things that also happened to be edible. Although the original run was produced in 1994, Doctor Dreadful has proven to be quite resilient; the toys are still in production today. Fun fact: In the original commercial, Doctor Dreadful was played by John Kassir — aka the voice of the Crypt Keeper for Tales from the Crypt.

There have been a lot of baby dolls released over the decades that eat, poop, and pee; these days, they’re a lot less messy, merely simulating the actions instead of actually doing them. Baby Born, though? Baby Born drank real water and subsequently urinated real water; she also ate real food and presumably pooped real food, although I’ve never witnessed it in action myself. I can only imagine what a delight this must have been for the parents of kids who really, really wanted a Baby Born of their own.

Wonder World was one of those toy lines I always desperately wanted, yet never actually had—and in retrospect, I can kind of understand why: My parents didn’t want to have to deal with the mess involved in making a giant tub of gel. But hey, at least once you made the gel and stuck the figurines in it, you had the beauty of a fish tank without actually needing to take care of any fish, right?

I mean, the point of the game was (and is — it's still around) to pull boogers out of some guy’s nose until his head explodes. Just… think about that for a minute.

To be fair, those sticky hand things you got out of vending machines weren’t really that messy in and of themselves; they stuck to things, sure, but they peeled right off whatever you slapped with them. After a while, though, they picked up all the stuff they weren’t really supposed to — stray hairs, dust, nail clippings, you name it. That’s when it got messy, because no one likes being slapped with a pile of dirt.

This Goosebumps -themed playset was, at its core, nothing more than a sort of reusable art project — think Mr. Potato Head, but with less imaginary starch and more actual slime. The slime was really the selling point; one of the many things you could do to your monster face was have green goo ooze out of its skull. Yum.

When it’s dry, it’s sand; when it’s plunged into a tub of water, it’s more like clay. Just, y’know, don’t accidentally tip over your Squand’s aquatic habitat; then you’ll end up with a mess that’s both soaking wet and impossibly sandy.

What’s messier than Gak on its own? A vacuum-like object that sucks Gak up before shooting it back out as ammunition. I like to think of it as the forerunner to that Super Soaker Oozinator thing that came along in 2006.