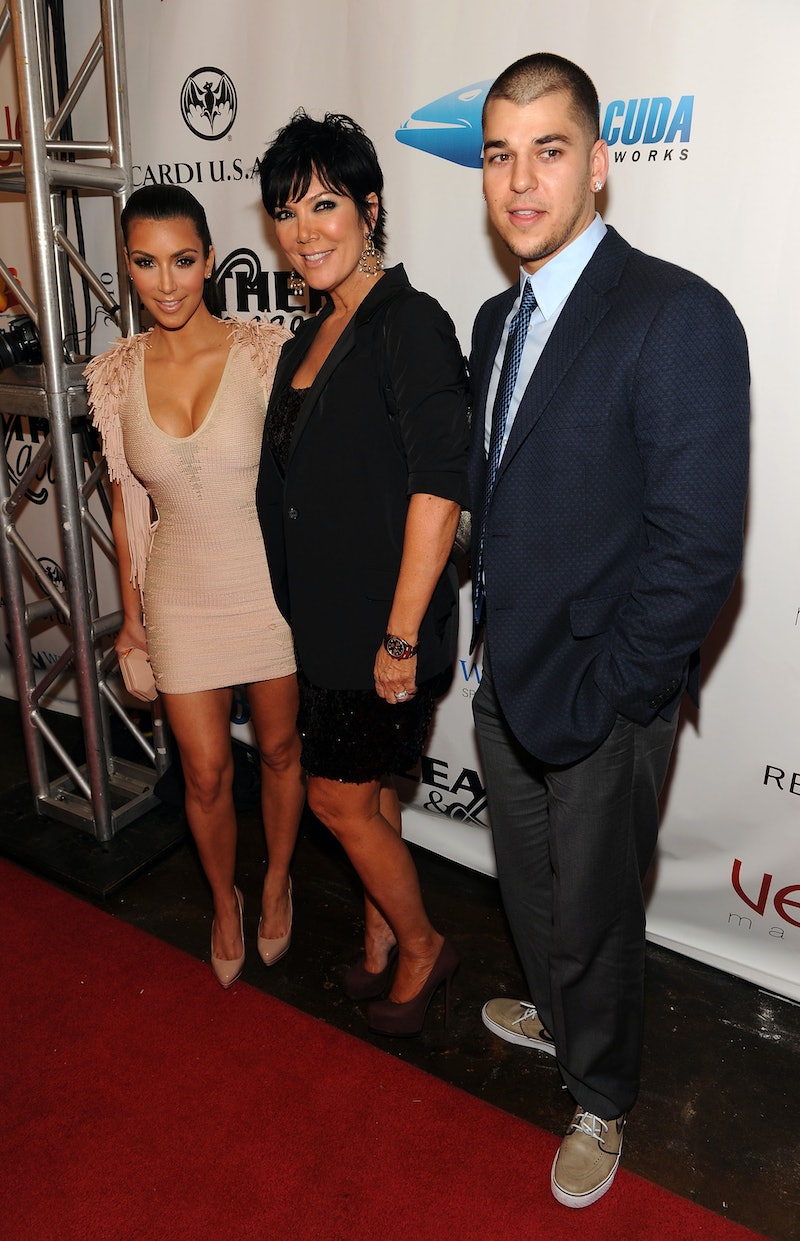 Chances are, if you follow celeb news even just a little, you had some sort of reaction to Rob Kardashian and Blac Chyna's engagement announcement on Tuesday (April 5). Maybe you were stunned, maybe you were all "WTF," maybe you weren't surprised at all given the romantic trajectory of their relationship. But still, the reaction was there — which is honestly more than I can say about the Kardashian-Jenner camp, who has been abnormally silent amid the announcement that their brother is getting married. While two players in the situation have spoken up to congratulate the couple — that would be Tyga (Kylie Jenner's boyfriend and Blac Chyna's ex-fiancé), and Amber Rose (Blac Chyna's bestie and former girlfriend of Kanye West) — the rest of the fam has been Snapchatting away, purposely avoiding making any public statement about the engagement. What does the Kardashians' non-acknowledgement of Rob Kardashian's engagement mean?

According to TMZ's sources, the reason the rest of the family hasn't made any statements about Rob's engagement is because they believe he's a "serial proposer" and that the "feeling in the family" is that "Rob just gets smitten and goes from first date to bended knee at warp speed, and it never works out." Rob has been in some high-profile relationships before (see: Adrienne Bailon and Rita Ora) and though they've never been engaged (publicly, at least), TMZ's insiders revealed that Rob told his family in the past that he proposed to them both. Still, the Kardashian-Jenners would be kind of hypocritical to be shutting Rob out for proposing too quickly — Khloé and Lamar Odom got married a month after meeting, and Kim Kardashian and Kris Humphries tied the knot just 90 days after getting engaged (a marriage that lasted for 72 days, lest we forget).

So yeah, there seems to be a little more to the story besides the notion that the family may think that Rob is rushing into things too quickly. And the obvious answer is this: Rob's relationship with Blac Chyna has caused some serious tension between him and his family. He alluded to as much with that since deleted (yet unforgettable) NSFW meme that literally read, "When the p*ssy good but your family don't like her so you drop your family and become an orphan." To refresh your memory, the reason this relationship is awkward AF is because Blac Chyna was engaged to — and shares a son with — Tyga, who has been dating Kylie Jenner, Rob's half-sister.

Only here's the thing: Despite the initial backlash from the fam (who can forget Khlo é 's Godfather references about "going against the family"?), it kind of seemed like the Kardashian-Jenners had accepted the relationship as of late. Kris Jenner had only nice things to say about Blac Chyna, and Kylie (the one who would feel the most uncomfortable about this situation, TBH) even posed for a pic with her brother and discussed how they see each other "all the time." So what gives?