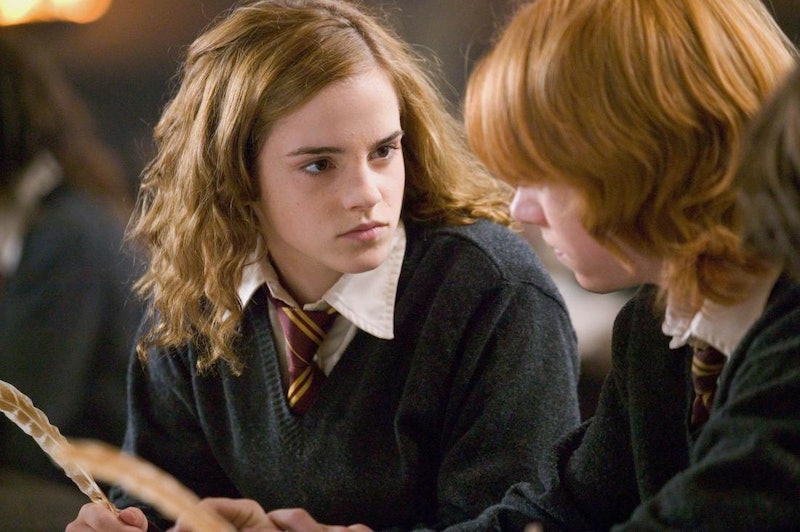 Ever think dating would be just so much easier if you were a wizard? From mixing love potions to using silencio to block unwanted come-ons, surely dating in the wizarding world would be a breeze. But when I set up OKCupid profiles for a few of the Potterverse’s leading ladies, I discovered that dating as a witch isn’t as simple as it seems.

When I did this experiment last year with Jane Austen characters, I was pleasantly surprised by the results: While there’s certainly no shortage of creepy personalities online, modern men seemed in general to be attracted to the strength and honesty that was deemed inappropriate in women in Austen’s time.

So I was very intrigued to see how J.K. Rowling’s magical characters would fare. Rowling created some seriously badass women throughout the course of the series — but how would they cope in the weird world of online dating? Would Cho’s sweet romanticism attract as many boyfriends as she had in the books? Would Hermione’s brains make her as unpopular as she was at Hogwarts?

Using only direct quotes from or about each character (translated into Muggle language, of course, to avoid violating the Statute of Secrecy), I filled out profiles for Hermione, Ginny, Luna, Cho, and Bellatrix Lestrange.

I wasn't convinced Hermione's aggressive profile would do terribly well in the real world. While we know she's feisty and tough, at first impression, she can come off a little overpowering. That's what Harry and Ron thought in Book One, anyway. (Idiots.) Unfortunately, my profile picture held a bit of a giveaway that this isn't the real Hermione: She never would have put her arms through the wrong holes in her graduation gown like I did. Whoops.

"You seem like an intellectual woman with hair much like that of a Disney princess. Which section of the library is your favorite?"

I feel like Hermione would love this response. Looks have never been a priority for her, of course, but we do know she has a bit of a complex surrounding her hair and teeth — so a compliment about her hair would definitely put her in a good mood. Much more importantly, however, is the library question. You just know Hermione would have an answer on the tip of her tongue. Here are a few more responses:

"I promise I have an emotional range wider than a teaspoon."

"Hi, what are you doing to do good in the world?"

"Don't worry I like to talk to people with interesting bios and yours caught my attention."

This is just a small selection — but it was great to see how many people actually engaged with Hermione's profile, and responded to her worries and complaints about the dating scene.

"Seeing as how your page is nothing but Hermione quotes, lets be friends!"

"Why like anyone for any reason? Humans are terrible."

At least this guy read her profile, I guess? But wow, not the most uplifting conversation starter for someone hoping to find love.

Ginny was always very romantically popular in the books, so I had a feeling she'd do well on OKCupid as well. It was easy to make her profile sound pretty flirty and gutsy — though I found a lot more quotes about her rather than from her, which was interesting. I loved her so much in the books that I'd never realized how much we see her through Harry's eyes, rather than her own.

Ginny may have got a lot of likes, but she didn't seem to inspire any interesting comments. In fact, this was the best of a bad bunch:

Yeah, it's seriously forward, but at least this guy recognized that Ginny has an interesting personality of her own — whereas most of the other messages were sent by people trying to make it all about them.

"Bit random but I had the bottle to say hello ;)"

Do you want a medal? Ginny is such a well-rounded character in the books; I think she deserved her OKCupid suitors to take a bit more of an interest in her. She's not a Manic Pixie Dream Girl, guys; she doesn't exist to make you feel big and brave.

I just had no idea how Luna's profile would go down with the OKCupid masses. We never saw her being particularly romantic in the series, although we do find her married off at the end. Luna needs somebody who's willing to open their minds to all possibilities, without demanding explanations. Armed with my spaciest-looking profile picture, I waited to see who would humor her conspiracy theories.

This person was most likely making fun of Luna, but at least he's given her enough material to work with. Once she got started excitedly exploring all these theories, he might not be able to resist her dreamy attitude after all.

Whoa, serious red flag alert here. Demanding answers is absolutely not how to appeal to Luna.

In the books, Cho was always pretty romantically successful — other than her disasterous Valentine's date with Harry, of course. But when I set out to find some quotes, I was amazed at how little she ever really says about herself — and how vague all the descriptions of her were. Cho is probably J.K. Rowling's least feminist character — not because of any of her specific personality traits, but because she's been reduced to little more than an over-emotional romantic object. I picked my soppiest profile picture and username, and set out to see whether the men of OKCupid like blank slates as much as the men of Harry Potter obviously do.

"Sooo, what do you do for a living? I'm intrigued!"

Good question! Cho's profile gives very little information — so fair play to this guy for trying to find out a little more.

"Hey there! If your mind was a room, describe what someone would see if they walked into it."

That's not such a bad conversation-starter, right? Except for the fact that this dude sent that message to every one of my profiles... and that same guy had sent them to all of my Jane Austen-themed profiles last year, too. He needs some new material, but Cho needs a lot more personality before she could hope to attract any real-life romance. Maybe she was using love potions this whole time?

I didn't even translate this one into Muggle terms, because I don't think Bellatrix would degrade herself so far as even to pretend not to be a pure-blood witch.

"I'm curious to know if you are as outgoing and strong minded as you appear based on your profile?"

Bellatrix's upfront profile could have gone two ways. It might have scared everybody off, but instead it attracted the most messages of everyone. As shown by these quotes, it looks like men saw Bellatrix as an exciting challenge — so perhaps (literally) being an evil witch is a good tactic on the dating scene.

"Please either stop being so gorgeous or talk to me your choice."

Bellatrix's profile makes it pretty clear she is an independent woman; this type of message suggests that she (and her seductive personality) might exist solely for a man. I have a nasty feeling the poor sender of this message might have found themselves on the end of the Cruciatus curse.

The first conclusion is that the men of OKCupid really need to pay more attention to what people are asking for in their profiles — but the second conclusion is that dating as a witch is seriously confusing. There seemed to be no rhyme or reason to what attracted men to their profiles: Ginny, for example, got the most likes by far, but barely any messages; Bellatrix got the most messages, but only a moderate amount of likes.

There were only two constants: Cho was the most unpopular in every category, and Hermione was consistently near the top. (I mean, of course she was. She's brilliant.)

So did this magical experiment tell us anything positive? Well, the good news is that the unfortunate trope of reducing a woman to a blank "love interest" character doesn't seem to have influenced the men of OKCupid too much: Cho may have been the perfect "girlfriend type" in the books, but this oversimplification didn't go down too well online. The stronger and more honest characters had much more luck: Even personalities like Hermione's, which are sometimes cruelly stereotyped as "bossy" or "crazy," proved popular with romantic suitors.

Basically: witch, wizard, or Muggle — we can't be squeezed into "perfect" molds, and nor should we be.