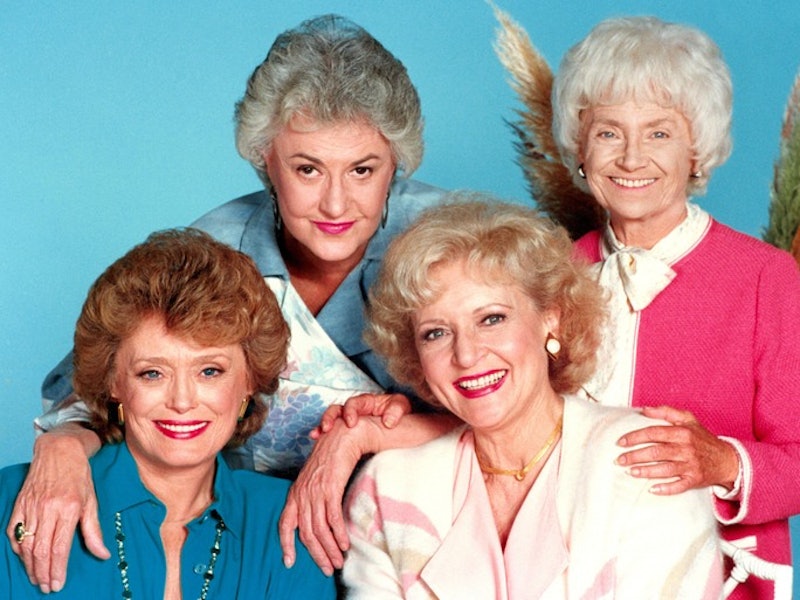 Few TV shows — if any — have managed to stay relevant as long or appeal to as many generations as The Golden Girls has. Peppered with frequent and hilarious humor, yet unafraid to dive into serious issues, the series managed to be both ahead of its time and timeless. Writer Jim Colucci pays tribute to the iconic show in his new book, Golden Girls Forever: An Unauthorized Look Behind the Lanai . His work provides new perspective on the beloved series through photos, celebrity commentary, and interviews with the cast, creative team, crew, and more. If you're a Golden Girls fan, you're going to want to read it.

Golden Girls Forever goes behind-the-scenes, from the project’s inception to its stars’ careers once the series ended. It’s fascinating to see how the show came together and what made it as successful as it still is. Colucci’s work is so comprehensive that we even find out how the set’s wallpaper was selected (layers and depth) and how Golden Girls fashion made its way onscreen. Best of all, though, is the discussion on the show’s far-reaching and long-lasting impact. The book highlights the importance of The Golden Girls and honors the people who made the series what it is.

Below are 12 seriously cool things you never knew about The Golden Girls, thanks to Golden Girls Forever.

1. The Series Has Unique Origins

It’s fitting that a show as exceptional as The Golden Girls would have a distinctive backstory. Believe it or not, the idea stemmed from a joke between actresses Selma Diamond (Night Court) and Doris Roberts (Remington Steele) as they presented at NBC’s fall preview special in 1984. When the network’s then-president, Brandon Tartikoff saw them checking out Miami Vice actor Don Johnson and then heard Diamond make a joke about a new series called Miami Nice, centering on retirees in Florida, he was intrigued. He later revealed that he’d been mulling over the idea of a show about a group of women living together since watching the movie How to Marry a Millionaire starring Lauren Bacall, Marilyn Monroe, and Betty Grable; the two ideas came together nicely, with the help of the creative team he commissioned.

2. The Series Was Actually Called Miami Nice In Its Early Stages

Miami Nice may have been a joke, but the title stuck around for quite a while. Ultimately, though, the network thought it would be too confusing to have shows called both Miami Vice and Miami Nice, according to Golden Girls Forever. Their choice was a good one.

3. Estelle Getty Became A Regular After Winning Over Audiences As Sophia

Sophia wasn’t originally intended to stick around week after week. The idea was that she’d visit her daughter Dorothy, but her residence would be a retirement home called Shady Pines. Fortunately for us all, the network couldn’t bear to see her go. Audiences reacted so well to Getty’s performance during pilot tapings that Sophia went from a recurring character to a scene-stealing regular.

It sounds strange now, but the production team originally wanted White to play Blanche and McClanahan to portray Rose. Each had previously played characters similar to those roles, so it seemed like a good fit. Thankfully, pilot director Jay Sandrich realized they should switch, letting McClanahan act the Southern seductress and White bring to life the naïve Midwesterner. I’m sure they’d have been great regardless, but the result we got was phenomenal.

Arthur wasn’t entirely enthusiastic about The Golden Girls when she first learned of the project, according to McClanahan. The two had been co-stars on Maude, so McClanahan set about convincing her. As she tells it, Arthur felt they’d both be playing roles too similar to what they’d done already, but when she found out about White and McClanahan trading roles, she was more interested. That switch was key in so many ways.

6. The Network Didn’t Want To Cast Bea Arthur, Even Though Dorothy Was Written For Her

The real struggle to get Arthur cast initially came from the network. She wasn’t well-liked by audience members after portraying a controversial character on Maude — her storyline involved getting an abortion, and this was even pre-Roe v. Wade. NBC was reluctant to bring her onboard, but Golden Girls creator Susan Harris had her heart set on Arthur. She’d worked with the actress on Maude and written Dorothy with her in mind. Fortunately for us, she got her way.

7. The Memorable Kitchen Was A Last-Minute Addition

Although the Golden Girls kitchen played a central role in the series and was the site of many a chat over cheesecake, the room wasn’t part of the original script. The setting was added in after revisions, meaning the show’s assistant art director, Michael Hynes, had to scramble to come up with a set. He ended up recycling the kitchen from It Takes Two and altering it to fit the show’s needs. One thing that got left out, though, was an oven. Anytime the actresses took food out of the oven, there wasn’t really one there. Whoops.

On top of the oven problems, The Golden Girls kitchen set didn’t work with the layout of the house. Based on the established locations of other rooms, the kitchen posed serious logistical problems. With its addition, it was no longer clear to viewers where the garage was located, Rose’s room looked like it was in the backyard, the lanai’s orientation was flip-flopped, etc. Hynes shares in Golden Girls Forever that the team planned to fix it after the pilot, but it never happened.

Early on, Getty got serious about finding props that she envisioned her character using. She would comb thrift stores for useful items, and her efforts paid off. Getty was the one to find the straw purse that Sophia used throughout the series’ seven seasons.

10. Rue McClanahan Got To Keep Blanche’s Wardrobe, Thanks To An Ingenious Contract Clause

All of the Golden Girls wore tons of outfits over the course of the series, but only McClanahan got to keep all of hers. According to a friend, she used to have it written into her contracts that her characters’ clothes would be hers to keep. Blanche would be proud of the savvy move, don’t you think?

11. The Series Helped Popularize “The Golden Rule Of Four”

Although not the first series to focus on a group of four female friends, The Golden Girls definitely played a huge role in making the formula popular, argues Colucci. For the next several decades, similar groups have emerged, often with characteristics that closely mirror those of Rose, Blanche, Sophia, and Dorothy. Think about it, and you’ll find The Golden Girls’ influence in Designing Women, Sex and the City , Desperate Housewives, Girls, and many more series.

12. The Show’s Impact Can Be Found In Unexpected Places

The Golden Girls wasn’t just a hit during its run from 1985 to 1992; the show remains popular in syndication and is frequently referenced in pop culture. (Remember Summer’s obsession with the show on The OC ?) There’s also been an impressive amount Golden Girls-inspired drag shows that have cropped up in seemingly all corners of the United States over the years. Everyone loves the four lovely ladies.