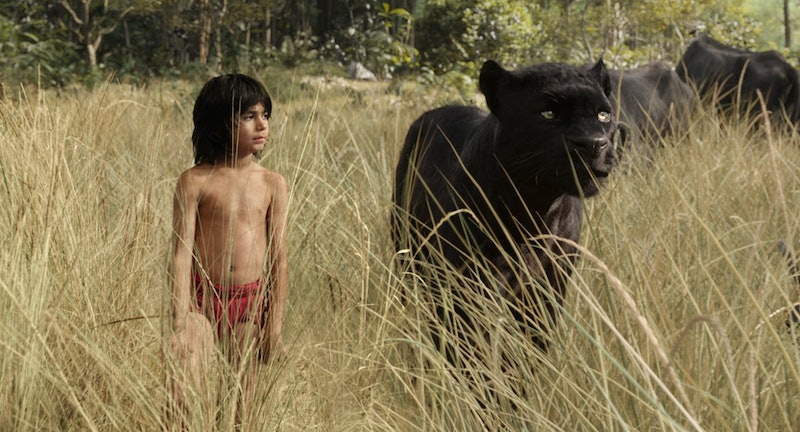 What Disney kid didn't experience a nostalgia attack when the first teaser for the 2016 Jungle Book reboot ended with a few whistled notes of "The Bare Necessities"? The new film, directed by Elf and Iron Man helmer Jon Favreu updates the 1967 Disney animated classic into a CGI and live-action combination that puts audiences right into Mowgli's jungle home. Generations have grown up watching Disney's first feature version of this story, and surely the studio hopes that sentimentality will beckon those adults into theaters for this new one. But The Jungle Book also has the potential to draw a new, younger audience. Parents may be wondering based on the action-packed trailers — is The Jungle Book suitable for kids?

The official Motion Picture Association of America (MPAA) rating for the 2016 Jungle Book is PG, or Parental Guidance suggested. There is no age constraint for PG films, but some caution is advised. You are probably now used to seeing the brief explanations for different ratings in movie trailers and on posters. For The Jungle Book, the rationale for the PG rating reads "for some sequences of scary action and peril." That's about the level of adult content that I'd expect for a film like this. Note that there are no warnings about language, sexual content, or drug use. Non-graphic violence and scares are the concern here. And those may be made more intense by the 3-D technology.

I have personal memories of being frightened by the animated Jungle Book. There are characters who want Mowgli dead, and that much is made very clear in the story. The difference that this new film might make for some children is the relative realism of the action. Some young movie fans are used to seeing "scary action and peril" in cartoons, but not in movies that more resemble real life. The non-human characters of this Jungle Book — including the wrathful tiger Shere Khan and cunning python Kaa — are visual marvels that look like they could tear through the screen at any moment. They may be too lifelike for some young viewers to handle.

Another element of this movie that's worth considering for this purpose are the circumstances of the 10-year-old human protagonist Mowgli. As a child who is raised by a wolf pack and then goes on a dangerous journey through the jungle, the young hero endures a lot. It can be more distressing for some children to see a character close to their own age in scary situations than it would be an adult.

With all of these components taken into account, the fact still remains that The Jungle Book is a movie that's aimed at kids, though ideally still enjoyable for adults. "Maintaining the buoyant heartbeat beneath all the digital flash, [director] Favreau never loses sight of the fact that he’s making an adventure story for children," Andrew Barker wrote in his Variety review.

Stout-hearted kids who don't mind a little bit of peril should be thrilled by this new Jungle Book. And for those children who aren't quite ready yet, the tamer (though racially problematic) animated version is always an option.

More like this
A 'Bridgerton' Star Just Dropped A Major Hint About Joining The Live-Action Barbie Cast
By Bustle UK
Shocked Fans & Former Co-Stars React To Ray Liotta’s Death At 67
By Grace Wehniainen
'Stranger Things' Star Joe Keery Is Dating An "Indie Scream Queen"
By S. Atkinson and Grace Wehniainen
Laura Dern Said “Cultural Awareness” Made Her Rethink This 'Jurassic Park' Fact
By Grace Wehniainen
Get Even More From Bustle — Sign Up For The Newsletter