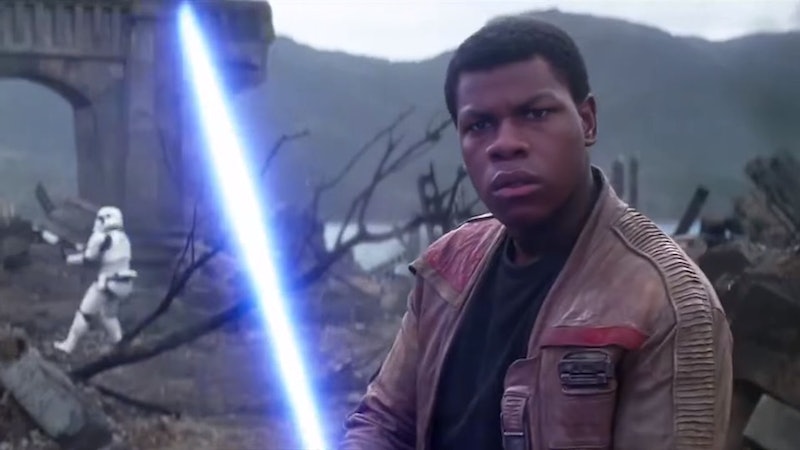 Just in case your head isn't already spinning with theories about who Rey's parents are or whether or not Kylo Ren really is committed to the Dark Side, there's another much more intriguing one that has quietly lived on Tumblr since Star Wars: The Force Awakens first came out. It is possible, a lot of people are wondering, that our buddy Finn is Force-sensitive? When you squint, there's a lot of evidence that might point to just that.

Of course, the idea was not-so-subtly planted into everyone's mind when Finn's introduction to the nerdosphere was him wielding a lightsaber in the trailer for the film. It's the other actually subtle turning points in the movie that seem to hint that Finn definitely has Force potential. Some people are going as far to say that Finn himself is a Skywalker, and that all the theories about Rey being Luke's daughter are a red herring to distract from that. While I've dissected Rey and Finn's parentage so much that I'm having way too much of a "Jesus Take The Wheel" moment with them to really dissect the possibility of it in this post, there are still plenty of canon indications that Finn might be every bit as Force-sensitive as we know Rey to be. Here are some parts of the movie you might have missed:

Snoke Refers To An Awakening Long Before Rey Has Her Vision

This scene takes place before Rey hears the call of the lightsaber, and before Rey really does anything noteworthy aside from escape Jakku with Finn. You know what crazy insane thing does happen before Snoke says this? Finn becomes the first stormtrooper in the history of the First Order to defect and escape from the base. And of course Kylo Ren felt it — enough that he was able to identify Finn by his exact number. Ren doesn't seem like the type to bother distinguishing stormtroopers from each other, even if he suspected one was behaving oddly.

It Would Explain Why He’s The Only Stormtrooper Who Defected

The First Order seems pretty damn confident that their "reconditioning" works on stormtroopers, and again, Finn is the first one who has ever truly defected. Not only that, but he is so inherently, unshakably good. That's just plain impossible, given his upbringing. He's literally been brainwashed since he was a baby. The only kind of mind that could persevere through multiple attempts to "recondition" it would be a Force-sensitive.

It Would Explain Why Captain Phasma Lowered The Shields

People were all up in arms about Phasma basically rolling over when she was threatened — which is fair. The First Order seems ridiculously loyal to their cause, and surely a captain would be more than willing to die to protect what is a massive project made from unfathomable time and money. She would objectively know that sparing her own life was not worth the whole of Starkiller base, or all the trained stormtroopers who died on it. So why would she listen to Finn? The only sensible explanation — he used the Force to compel her.

The Lightsaber Is An Iconic Image

It was no accident that Maz handed Finn the lightsaber, or that they had him fight with it. There was literally no reason for movie makers to put that image in our heads unless they were priming us for a possible Force-sensitive Finn ass kickery. And they didn't do it once, they did it twice. Finn got more action with a lightsaber than Rey, and she's the main character.

He Survives On Jakku

Finn survived the walk to Niima outpost in the middle of nowhere, surrounded by a bazillion things that could potentially kill him, including sand that swallows people up. The movie doesn't get as much into the specifics on that, but a quick read of the novelization of the movie or Rey's Survival Guide, and it's actually stunning that he found civilization based on some vague senses alone.

I know, I know — Ren was injured. But consider that Finn holds his own against Kylo Ren for as long as he does despite the fact that Kylo Ren, having worked for the First Order and observed all of the stormtrooper training, should be able to anticipate every single move that Finn makes. You can see from the genuine frustration in Ren's face that Finn has surprised him. And if anything, the fact that Ren screams "TRAITOR" at Finn so emphatically is further proof that there is something fishy going on. Why would Ren be so angry that one seemingly expendable stormtrooper left the ranks? Unless Ren was keeping tabs on him, because he absolutely knew what Finn was capable of from the start.

Yes, Finn knew what the First Order was capable of, more so than any of the observers on Takodana. But people are speculating based on the editing of the film that Finn seems to literally hear the screams of people on the attacked planets, looking up toward the sky before anybody else sees the red streaks. Tumblr user meetthedamerons shared these GIFs of the moment:

Here you can see him turning as if reacting to a sound — when from his vantage point, there was absolute silence, and the light was nowhere near bright enough to attract the attention of someone whose back was turned to it, and in broad daylight.

Of course, his next few moves — alerting them that it's the First Order — make absolute sense, since he knows what the First Order is capable of. It's the obvious ripple he feels beforehand that seems to indicate Force-sensitivity.

So basically, Luke is going to train Rey and Leia is going to low key accidentally train Finn and then they're going to make a Happy Adorable Jedi Summer Camp (TM) for the next generation of jedi, and Kylo Ren is going to take up basket weaving, and everything is going to be fine. OK, OK, my nonsense aside, it is far more than a coincidence that all these puzzle pieces about Finn are coming together. I'm holding out for a Force-sensitive Finn, and I'll be the one screaming in the theaters when it comes true in 2017.