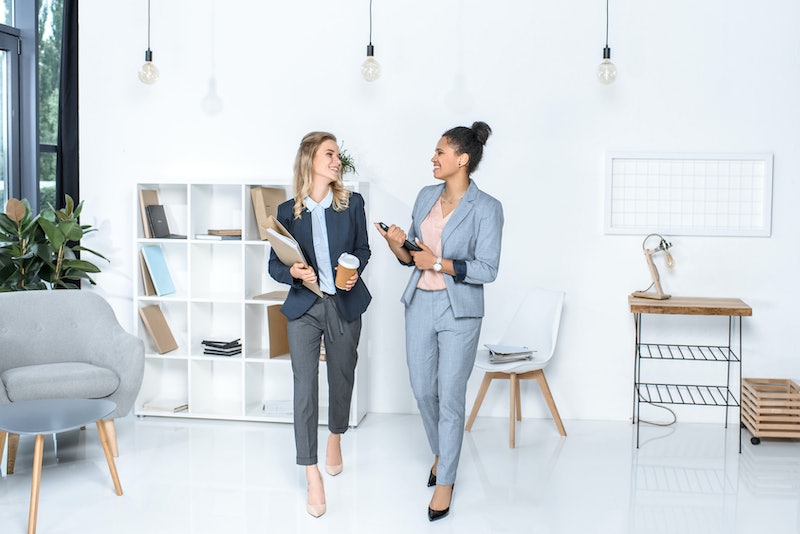 There are a lot of theories about the causes of the gender pay gap, including the idea of a "confidence gap" that causes women to ask for less money. However, according to science, the reason women don't negotiate pay isn't a lack of confidence, but rather the response we tend to get when we try. In other words, it's not that there's something wrong with women, it's that there is, once again, something wrong with the world we live in. So can we stop blaming women for the systemic oppression we face?

There's been a lot of discussion about equal pay this week, seeing how Equal Pay Day was on Tuesday; however, the idea that equal pay is a problem with women, rather than society, still persists. The argument goes something like this: Women give up their careers or put them on hold to have kids. Women want to work in fields that happen to be lower paid. Women don't negotiate their salaries. Basically, these are all things that women do wrong, according to this argument. There's never any mention of the fact that, for example, one of the factors at play with women leaving the workforce to have kids is largely due to the fact that our cultural narrative still sassumes women to be the primary caregivers. There's no mention of the fact that when women enter predominantly male fields, pay rates drop across the board.

Furthermore, science has pretty thoroughly debunked these sexist explanations, including the idea that women would be better off if we negotiated for our salaries. It's true that women negotiate salaries less often than men do, but the idea that this is a mistake and not a strategic necessity is simply unfounded.

Here are four things science has found when it comes to women and negotiating for higher pay.

In multiple studies, researchers have found that employers don't like it when women are offered a job and negotiate the salary. For instance, in one study, when participants read written accounts of candidates offered jobs and then evaluated the candidates based on those accounts, evaluators clearly penalized women who tried to negotiate pay. And this pattern persists in other research as well. In other words, trying to negotiate is probably going to get you nothing but ill-will as a woman.

This pattern doesn't just apply to new hires, either. Studies have found that bosses don't tend to like female employees asking for a raise, either. Basically, just be happy with whatever they want to pay you, I guess.

Some studies have suggested that male employers don't like women to negotiate pay, while not minding it when men do the same. Female employers, on the other hand, don't tend to like it when anyone negotiates, possibly because women are used to be penalized for trying and assume that's just the way things work. Either way, no matter what gender your boss is, it seems like it isn't a good move for women to negotiate for themselves.

4. Negotiating For Others Is A Different Story, Though

Studies have shown, however, that even though people don't like women to ask for more money for ourselves, it's OK if we want to advocate for other people. Which I would imagine ties back into that whole "women are caregivers" mentality we still haven't gotten over in our society. It's fine if a woman wants to help someone else. It's only when she sees inherent worth in herself that there's a problem. For all the patronizing talk about the "confidence gap" and how women just need to speak up, it seems that people don't actually want confident women.

The fact that people see women's reluctance to negotiate our own salaries as a fault and not a valid strategic call shows that we still have a long way to go in addressing the gender gap. After all, how can we fix the real problems if we're still too busy blaming women for all of them?