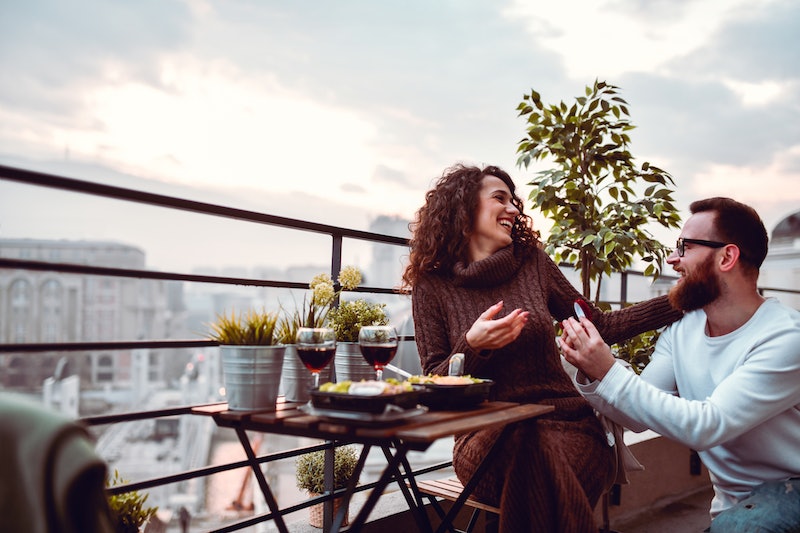 One of the first things you’ll be warned about if you get engaged is the fact that other people — people who really have nothing at all to do with your relationship, your engagement, your wedding, or your marriage — are going to have a lot of opinions. They will often express these opinions to you without your asking for it, and they will expect you to follow their unsolicited advice to the letter. As whole, this will be irritating; however, many of these opinions will also involve a lot of sexist assumptions about getting engaged — and those will be the most irritating of the bunch.

It’s worth noting, though, that other people aren’t the only ones who will fall prey to these assumptions. Because of what our society teaches us from an early age about relationships, engagements, weddings, and marriage, many of us walk into our own engagements holding a lot of the same assumptions. We can blame the patriarchy for that. What we can’t blame the patriarchy for, though, is our insistence on sticking with them when we know that they’re arbitrary at best and extremely problematic at worst. That's on us. But luckily, we can do something about it. It's not easy to unteach yourself everything your entire life's experience has taught you... but it can be done. And it's worth it.

I’ve mentioned before that I feel fortunate in the fact that, over the course of my engagement, I haven’t faced a lot of the common inappropriate questions, backhanded compliments, etc. engaged people in general and engaged women in particular often deal with — but I still think that the fact that this is something I count myself lucky for is pretty messed up. It means that, as a whole, we still have a lot of work ahead of us when it comes to dismantling the unhelpful and damaging trap of what we think relationships “should” be. In reality, there’s no “should.” There’s just what works for the people involved in the relationship.

These sexist assumptions about getting engaged? We don’t have to blindly follow them. Not anymore — and quite possibly, not ever.

1. He Did The Asking, If It’s A Heterosexual Relationship

There’s nothing wrong with it if he did — that’s what happened in my partner’s and my case (and no, the man asking in a heterosexual relationship doesn’t make the woman a bad feminist) — but it doesn’t have to be that way. There are no “rules” to getting engaged anymore; it doesn’t have to be done by a particular person, it doesn’t have to involve getting down on one knee, no one needs to ask anyone’s “permission” to propose, and there doesn’t have to be a ring. Everyone is capable of "popping the question," no matter how they identify; heck, there doesn’t even need to be a question-popping moment if you don't want their to be one. Deciding to get engaged is a mutual decision.

2. Engagement Rings Are For Women

You’re probably already aware by now that engagement rings as we know them today are not only a relatively recent tradition — they only date back to the late 1930s — but moreover, that they’re ultimately just a really, really successful ad campaign. That doesn’t make them a bad tradition; if they’re meaningful for the engaged people in question, then they’re a perfectly fine one. They’re just not really as… well, traditional as some might think (or have you believe).

But the idea that only a woman should wear an engagement ring — and in the case of heterosexual couples, that the man has to be the one to give the woman the ring in the first place — is, frankly, BS. As Bustle’s Zoe Fenson recently wrote, “Why does the woman get marked as ‘off the market’ while the man doesn’t? It puts all the control in the hands of the man, and all of the attention and judgment on the ring finger of the woman. It also assumes that all women want to wear engagement rings, and all men don’t.”

The good news is that we seem to be at the beginning of a paradigm shift. Many women in heterosexual engagements have begun gifting their male partners engagement rings (Pitch Perfect stars Skylar Astin and Anna Camp, for example, both wear them); furthermore, since the standard cultural scripts about engagement, weddings, and marriage don’t necessarily apply for LGBTQ couples, the script of the engagement ring is getting rewritten all the time to suit each individual relationship. No one even has to wear a ring at all if it’s not your jam.

3. An Engagement Means The Brides’ Family Is Getting Ready To Open Their Wallet

This tradition hearkens back to the dowry — essentially the price a family paid to a man willing to take their legally useless daughter off their hands. (Remember when women weren’t allowed by law to do things like own property or vote? Yeah. Good times. In that really, extremely, not good kind of way.) As The Offbeat Bride points out, dowries eventually gave way to the trousseau — wedding supplies like the bride’s dress, the cake, etc., usually made by the bride’s family — which, as people stopped DIY-ing their weddings, in turn shifted to the bride’s family simply paying out the cash required for the services booked for the wedding: Everything from the venue itself to the open bar.

But, like everything else on this list, this doesn’t have to be the case. Sure, the bride’s family might pay; but then again, so might the groom’s. Both families might pitch in, or they might not pitch in at all — the bride and the groom might choose to pay for the wedding themselves. It’s possible that the money might even come from somewhere else entirely, or that the whole thing might be done mostly for free (barring the fees involved in things like getting the marriage license). And similarly to the engagement ring tradition, the script of the bride’s family paying for the wedding might not even apply for LGBTQ couples. All scripts can be rewritten, revised, or tossed out entirely; they're not, as they say, written in stone.

Wow. Way to foist gendered stereotypes on everyone. It’s terrible no matter which way you slice it: For same-sex relationships, it implies that both brides will be insufferable until their wedding day, or that both grooms will be clueless and/or insufferable; for heterosexual relationships, it paints the bride as a “bridezilla” and the groom as a helpless baby; for gender-nonconforming people, it slaps a gendered label across them which might actually misgender them; and so and so forth. Everyone loses. So let’s just… not.

5. The Engagement Period Is A Groom’s Last Bachelor Hurrah

Oh no! However will he deal with being saddled to the same person for the rest of his life??? (This is totally not a problem for women, though, because they have clearly spent their entire lives waiting for this moment. See point number six below.)

6. Every Woman Wants To Get Engaged

Yes, we’re all just waiting for the day to arrive when we get to start flashing shiny pieces of jewelry and gushing about our intended and having in-depth conversations about what color the napkins should be. Right?

Uh… no. It’s the cultural expectation, but that expectation is wrong.

As Dana Norris points out at Role Reboot, our cultural narrative assumes that any and every adult will do these three things over the course of their life: Get engaged, get married, and have kids. It’s an erroneous assumption, of course, but it’s been so deeply engrained in the fabric of our society for so long that we still haven’t shaken it.

Not unlike the whole bride’s-family-paying-for-the-wedding thing, this assumption goes back to the fact that legally, women were not allowed to do pretty much anything for an absurdly long time. In the eyes of the law, women had no rights; therefore, they weren’t people. As such, getting married was the only guarantee that they’d, y’know, have a place to live, get their basic needs taken care of, not be cast out by society — those kinds of things.

But that’s not the world we live in now. There’s obviously still a lot of work left to do on the equality front, but at least we can hold jobs, own property, and generally take care of ourselves now. We can get engaged and married if we want to, and we can do it with whomever we want (not just dudes); but we don’t have to if it’s not the way we roll. Furthermore just because a relationship doesn’t involve a legally binding piece of paper doesn’t make it any less legitimate or committed than one that does.

Look. Getting engaged is pretty rad, if that's your thing; marriage has never been a priority in how I've run my life, but having a good relationship with a partner I love is a nice addition to an already satisfying life. But engagement doesn't mean anything other than the fact that the two people in question have decided to get married — and it's high time we stopped expecting it to be anything else.

More like this
5 Ways To Stand In Solidarity With Women In America From The UK
By Sophie McEvoy
How To Fight For Reproductive Rights, Based On How Much Time You Have
By Courtney Young
6 Expert-Approved Tips For Wedding Guest Makeup
By Olivia Rose Ferreiro
22 Gorgeous Wedding Manicures For Brides & Bridesmaids
By Olivia Rose Ferreiro
Get Even More From Bustle — Sign Up For The Newsletter