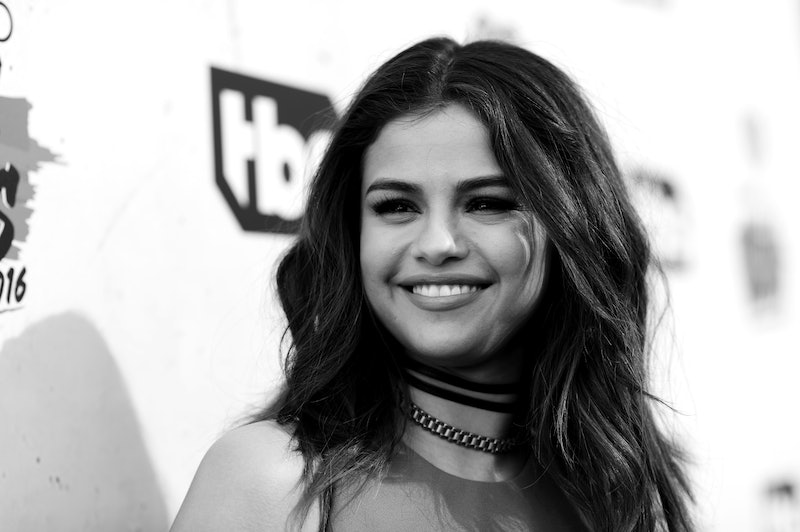 Selena Gomez's star power is perhaps higher than it has ever been, and a brand-new report indicates just how true this is. The "Heart Wants What It Wants" singer may have come out on the other side of a high-profile romance with Justin Bieber, edged-up for a role in the controversial indie Spring Breakers, and become the most followed person on Instagram in the years following her Disney days, but a bold new career move might be the thing to surprise Gomez fans. According to Deadline, Gomez is producing an autobiographical TV series for Lifetime, which, according to the site, will be inspired by events from her life and be told through the eyes of the lead character's friends. So, basically, we might be seeing a TV show about her life very soon.

It's no secret that Gomez is making moves in the TV world. The actress/singer added producer to her list of credits when it was announced that she would be producing upcoming Netflix series 13 Reasons Why , based on the popular YA novel. Gomez will also produce a new series for Freeform, dubbed the Latina Empire and based on the life of Ana Cobarrubias, an 18-year-old social activist from Los Angeles. Still, it's the series based on the 23-year-old Gomez's life that is making some people question just how, exactly, this show will work. Does she deserve a series telling her life story, when her life story is only 23 years long?

Deadline has already described the series as being similar to Entourage, which was based on Mark Wahlberg's experiences as an up-and-coming actor. Of course, when Entourage was being shopped around, Wahlberg already had a few more years under his belt than Gomez does now — at 23, it seems that Gomez is very much in the middle of writing her own success story. But, that doesn't mean this is a preemptive move by any means.

Though the series will be based on events from Gomez's life, the show could still take plenty of creative liberties. The series may simply use Gomez's life as a jumping off point for the events of the TV show, and ultimately diverge from Gomez's real history. The show could make a point to include major characters from Gomez's real life, and then, like Entourage, tell their stories in the most cinematic way possible. (Here's hoping that we get a very believable Bieber thrown in the mix. No creative liberties needed to amp up the drama on that plot line.)

However, there is one major thing that Gomez has going for her, despite her age. Gomez may be young, but the actress had a unique start in life worthy of some television drama. The star has spoken out about growing up poor, and said that acting helped her combat that particularly challenging time in her life. The "rags to riches" story is a popular one for television, and could be the spark that sets off this TV show. She's also publicly combatted bullying, and revealed her struggle with lupus — all while managing a successful acting and singing career. Gomez's story may not be finished yet, but she's certainly come a long way — and I, for one, can't wait to see a fictionalized version of her life story.

More like this
Selena Gomez Is Fine Being Single, But She Still Manifested Romance On 'SNL'
By Martha Sorren, Jake Viswanath and Jack Irvin
Vecna Officially Has A Fan In 'Stranger Things' Star Jamie Campbell Bower
By Alyssa Lapid
Lizzo Proved She’s Team Jeremiah During Her ‘The Summer I Turned Pretty’ Review
By Grace Wehniainen
Natalia Dyer Opened Up About Steve & Nancy’s “Lovely” ‘Stranger Things’ 4 Dynamic
By Grace Wehniainen
Get Even More From Bustle — Sign Up For The Newsletter