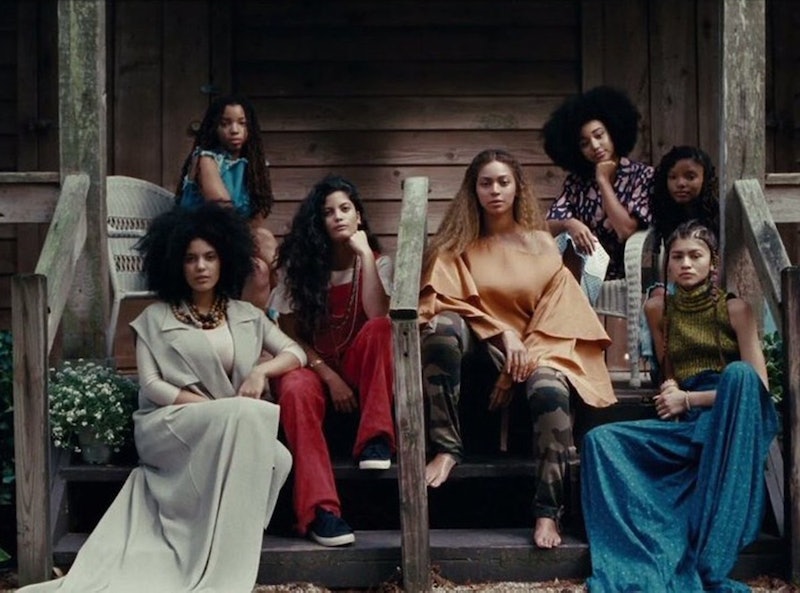 On Saturday Beyoncé blessed the world with Lemonade, her highly anticipated sixth studio album. The songstress premiered the project as an hour-long HBO special in the form of a visual album. Naturally, during and after the premiere, the internet was abuzz with chatter about Jay-Z’s suspected infidelity, Bey’s badassery, and “Becky with the good hair” (whoever she may be).

But the visual album goes far beyond cheating husbands and mystery women with good hair (more on that phrase here). With its many cultural references, meticulous detail, haunting poetry, personal stories, and use of Southern Gothic aesthetic, Lemonade is an unashamedly personal expression of Bey’s family history, multigenerational African-American issues, Black feminism, and an all-around embrace of Black culture.

So, yes, it’s a masterpiece. And, at its root, it's not about celebrity gossip or infidelity — Beyoncé’s Lemonade is an ode to Black women. This ode, filled with colorful visuals, breathtaking outfits, and relatable themes, was, well, magical.

"Black Girl Magic," coined by CaShawn Thompson, is a term used to illustrate the universal phenomenal, resilient, dope, lit, and slay-filled nature of the Black woman. It represents a culture of women who persevere in the face of adversity. With that, here are six moments of pure Black Girl Magic in Beyoncé’s Lemonade.

From those dressed in attire akin to that of the early 19th century, featured in “Pray You Catch Me,” to those seen cuddling up to their significant others in “All Night,” Black women and girls are front and center throughout the visual masterpiece.

The project saw a twerking Serena Williams in a body suit, and other famous faces like model Winnie Harlow, Zendaya, Amandla Stenberg, Quvenzhané Wallis, and singing duo Chloe and Halle. Alongside the famed Black women in the project, though, stood everyday women of color one would see walking down the street. The inclusion of a bevy of Black women boasting different shapes, sizes, shades, complexions, and hairstyles showed that we contain a multitude of identities, each one valuable and special.

In the James Blake-assisted “Forward,” Beyoncé featured the mothers of Mike Brown, Trayvon Martin, and Eric Garner, all unarmed Black men killed by police officers. Dressed in clothes like that of queens, Sybrina Fulton (Martin’s mother), Gwen Carr (Garner’s mother), and Lesley McSpadden (Brown’s mother) sat with photos of their slain sons in their hands and donned solemn expressions. McSpadden had tears streaming down her face.

At first glance, the moment is a nod to the Black Lives Matter movement, but, at its core, the moment is one of solidarity, shared experience, and grief. One many Black mothers know all too well.

3. All The Bold Hair Styles

Within the first minutes of the film, afros, coils, and tight curls filled the screen. From Bey’s silk head wrap and long, gold braids to Stenberg’s big, curly hair, to the flat top of a young boy passing by in the “Hold Up” video, hairstyles long-deemed “ghetto” and “unprofessional” ran rampant throughout the project.

The move to showcase such hairstyles was a bold one. To display hairstyles rarely seen in the mainstream — ones mainly specific to Black women and girls — is to glorify these women of color in a society where such women see the least amount of appreciation and representation. But Bey has never been one to shy away from envelope-pushing moves.

In “Don’t Hurt Yourself,” a quote from Malcolm X’s 1962 speech “Who Taught You to Hate Yourself?” plays:

Along with the voiceover, the faces of Black women of different shades and with different hairstyles appear on the screen, standing in streets and on sidewalks. The activist’s words and the women’s appearances are symbolic of the invisibility of Black women in America’s social, political, and economic spheres.

In a letter to “Mother Dearest” during “Daddy Lessons,” Beyoncé asks a series of questions about a man, including, “Did he bend your reflection?” and “Did he make you forget your own name?” In the end she inquires, “Am I talking about your husband or your father?”

The language in the short poem tells a story known all too well by Black women: a multigenerational story of sacrifice, longing, and strength in terms of relationships. During “Pray You Catch Me,” Beyoncé declares, “in the tradition of men in my blood you come home at 3 a.m. and lie to me.”

Through the eyes of a daughter and words of a father, “Daddy Lessons” is symbolic of the Black family experience — particularly the greater risk of instability among Black families due to the absence of Black men at home as a result of death or incarceration (which both have roots in systemic racism).

6. Celebration Of Black Women As Multidimensional

Beyoncé took a step toward abolishing the narrow, one-dimensional way in which society sees and interacts with Black women. By showcasing Black women and girls in many different lights, Bey challenged the contemporary view of Black women as either angry, loud-mouthed, undesirable objects or, as Patricia Hill Collins stated in her 1990 book Black Feminist Thought , "ubiquitous Black prostitutes, and ever-present welfare mothers."

Throughout Lemonade, Black women of all different shades, shapes and sizes are seen walking through water, sitting in trees, or rubbing their pregnant bellies on front porches.The scenes challenge society’s harmful lens that often puts Black women in a box. Beyoncé celebrated the multidimensional nature of Black women in the masterpiece by, for and about Black womanhood, and she did so boldly and unapologetically.

Along with its celebration of culture, beautiful visuals and numerous references, this ode to women of color illustrated a simple, yet powerful point: for the Black woman, unapologetic and beautiful are synonymous.