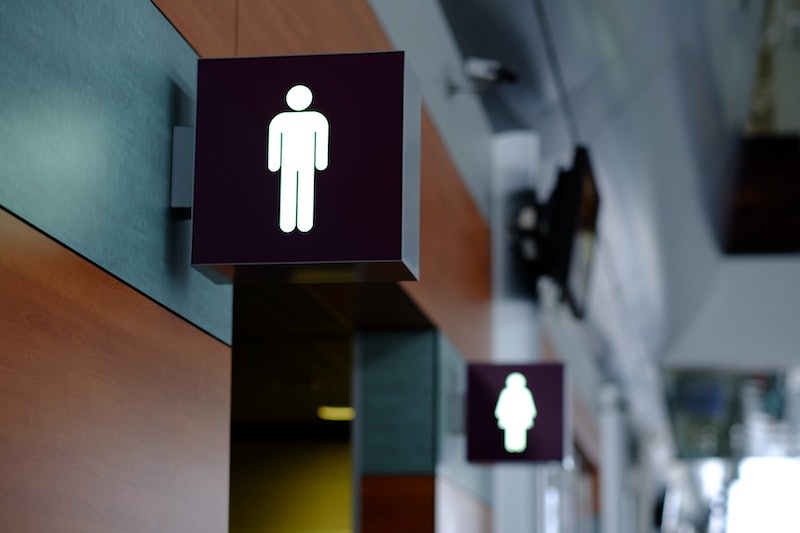 Recently, North Carolina passed a law prohibiting transgender people from using bathrooms that don't match the sex on their birth certificates, and other states are considering similar legislation. Much of the country has erupted in outrage over these bills, and some of the responses to anti-trans bathroom laws have been inspiring. If there's one good thing that's come out of this debacle, it's that people are now more educated about the hateful attitudes in this country and how they affect the LGBT community.

The North Carolina law, known as House Bill 2 or HB2, has several provisions, including that citizens cannot use public restrooms that don't match the sex on their birth certificates. This means that transgender people are required either to use the bathroom that matches the gender they were assigned at birth, or avoid public bathrooms altogether. Nine states are currently considering similar bills.

Many advocates have pointed out that such legislation makes trans people's lives more difficult, to say the least. It not only forces them to either not use public bathrooms entirely or use bathrooms where they might be harassed, but also perpetuates the damaging and inaccurate myth of the "transgender bathroom predator." Several lawmakers claimed that the bill would help keep cis women safe from sexual predators, which implies that trans women are dangerous. However, there is absolutely no evidence of trans people harassing or attacking non-trans people in public bathrooms. None.

Recognizing the harm in this policy and the ideas it promotes, here are some powerful ways people have spoken out about these anti-trans bathroom laws and discrimination against trans people.

In a viral Instagram post, Sarah McBride shared a selfie depicting her protesting the bill by using a public women's room in North Carolina. She also wrote some beautiful words about how public sentiment against trans people in bathrooms harms her. "They say I'm a pervert. ... They say I'm a threat to their children. ... They say I'm dangerous," she wrote of those who consider transgender people in bathrooms a threat. "Barring me from this restroom doesn't help anyone. And allowing me to continue to use this bathroom — just without fear of discrimination and harassment — doesn't hurt anyone."

McBridge tells Bustle over email that she wanted to remind everyone that "there are real people who need access to bathrooms when they go about their day." When she took the selfie, she said, she had been meeting with transgender people who were discriminated against in bathrooms both before and after the bill's passage and was "fed up with the hurtful rhetoric and the lies some politicians were using to defend banning transgender people from restrooms consistent with their gender identity."

2. Steve Rudner Explained On Facebook Why These Bills' Advocates Are Worried About The Wrong Things

As a father, Rudner wrote that he has many concerns regarding his daughter's safety, including the possibility that she will be sexually assaulted or that she will be hurt by a drunk driver. However, he explained:

Here's what I do not worry about: I don't worry about her being attacked in a restroom by a trans woman because (a) it has never happened; and (b) trans women are the most victimized group of people I've ever met, and the least likely to commit a crime of indecency in a restroom, because they are afraid of getting beat up when all they want to do is pee.

He has a point: There is no documented case of a transgender person sexually harassing someone in a bathroom. And even if there were, there are already laws against sexual harassment that would protect people regardless of the location or the perpetrator's gender identity. The myth that we need laws to specifically address transgender bathroom predators, he pointed out, is simply a way to promote an "agenda of discrimination and hate."

Rain Dove, a model and activist, assembled her followers and flew from London to North Carolina to conduct a sit-in in the bathrooms of the North Carolina Legislative Building. The protestors posted fliers with information about gender identity and trans issues in the bathrooms so that the state's lawmakers could educate themselves, Rain Dove told Bustle's Meg Zulch. "49 percent of transgender individuals attempt to commit suicide due to social pressures and due to the rejection from society, and bills like this are only going to make that statistic higher," she said in a Periscope broadcast of the protest.

Since HB2 only applies to public bathrooms, private businesses can still allow trans people to use the bathrooms of their choice, so many establishments posted on social media after the bill's passage to let customers know they'd be free to use the bathrooms of their choice. Web designer Emily Waggoner and her partner River Luck used this information to create a Google map of North Carolina bathrooms that trans people can safely use. Now, since other states are considering similar legislation, they have made the map nation-wide and started a website dedicated to trans-friendly bathrooms.

"Ever since I was 4 years old, I have dealt with bathroom harassment because of my appearance. From then until I transitioned two years ago, I have been told I was in the wrong restroom," Luck tells Bustle over email. "I have been escorted out of restrooms both as a child and an adult on more than one occasion, and so have several of my gender non-conforming friends." Waggoner tells Bustle over email that on a recent road trip to North Carolina before the bill was even passed, "There were multiple occasions where neither of us felt that he would be safe in the bathroom, so he would have to hold it until we found another spot." She adds that they "want businesses and organizations to be able to have a platform where they can raise their voices, be visible allies, and fight back."

Jonas and Lovato had several shows in North Carolina planned for their Honda Civic Tour, but after HB2 was passed, they announced in a statement released to GLAAD that they would no longer be performing in the state. "One of our goals for the Honda Civic Tour: Future Now has always been to create an atmosphere where every single attendee feels equal, included, and accepted for who they are," the statement read. "We know the cancelation of these shows is disappointing to our fans, but we trust that you will stand united with us against this hateful law."