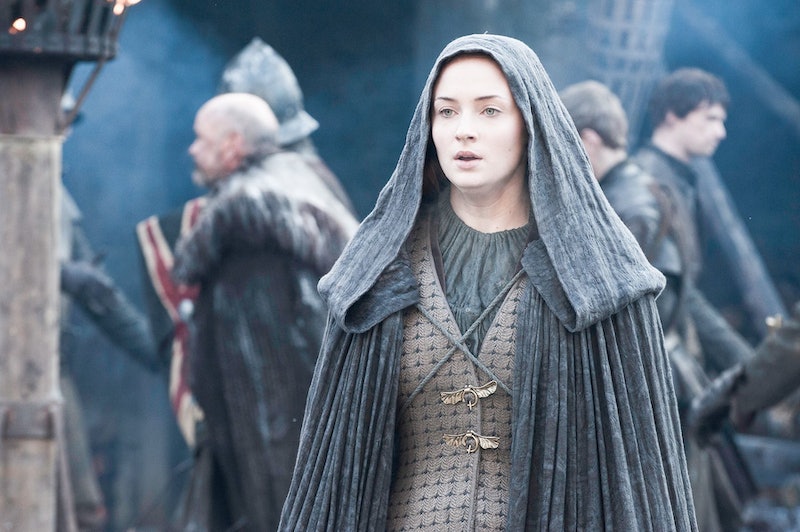 As many fans can attest, one of the most satisfying moments in the Season 6 premiere of Game of Thrones was the end of the action-packed scene in which Brienne of Tarth (Gwendoline Christie) saves Sansa Stark (Sophie Turner) from Ramsay's hunters. After Theon (Alfie Allen) and Sansa jumped to their freedom at the closure of Season 5, fans weren't sure where they'd end up, but the premiere put them on the run in the frigid forest surrounding Winterfell. When Ramsay's men (and their murderous dogs) found the duo, it looked like it would be back to the dungeons for the both Sansa and Theon — but thankfully, Brienne, female knight extraordinaire, showed up to kick some ass and pledge loyalty to Sansa.

When Brienne and Pod found Sansa with Littlefinger back in Season 5, Brienne pledged her loyalty, evoking the name of dearly departed Catelyn Stark as she declared that she'd put her life on the line to protect Catelyn's daughter. Fans couldn't wait for these two to get together, as Sansa had been tortured and manipulated for multiple seasons at that point; finding someone who truly cared about her well-being was essential. It was a shame, then, that Sansa was too blinded by Littlefinger's manipulation to see that Brienne was an honorable knight out to protect her. Brienne failed to convince Arya Stark (Maisie Williams) to trust her, and Sansa didn't give her a chance, either. It seemed like Brienne's oath to Catelyn would be one giant letdown.

Which is part of what made their reunion so moving. Once Brienne had successfully housed all of Ramsay's men, she recited her oath once again: "I will shield your back and keep your counsel and give my life for yours, if need be. I swear it by the old gods and the new." This time, however, after seeing that Brienne was truly out to protect her, Sansa responded with real acceptance, saying, "And I vow, that you shall always have a place by my hearth, and meat and mead at my table, and a pledge to ask no service of you that might bring you dishonor. I swear it by the old gods and the new. Arise." The moment was extremely touching, not only because Brienne had finally fulfilled one portion of her quest, but also because Sansa now had a powerful warrior on her side. Watching the two unite, it was hard not to get a little sniffly.

Game of Thrones' cast and crew clearly knew this scene would be affecting. In an interview with Entertainment Weekly , Christie said that "When she [Brienne] pledges her oath to Sansa and lays her sword down for her, I found it very touching... It was really gratifying to carry on that oath for Catelyn Stark and finally to find one of the Stark daughters and so she can try to keep her safe." The director of the episode, Jeremy Podeswa, noted in the same interview just how important the scene would be to fans of the two characters. Said Podeswa, "It's great when you can marry something that has a lot of action with something that’s quite emotional." And oh, did it work; a collective sigh of relief must have been let out among Sansa and Brienne fans when that scene occurred.

But now that these two female characters are finally working together, what happens next? Well I, for one, have newfound hope for their survival throughout the series. With Brienne by her side, Sansa could win the whole game. When women work together on Game of Thrones, they seem to have a much higher likelihood of surviving — just look at the Sand Snakes. Audiences haven't known them for a very long time, but what we do know of is their extreme loyalty to each other, which doesn't only come from them being blood relatives. The Snakes' care for one another might be the result of their upbringing in an absolute primogeniture society, where the eldest heir inherits the crown, male or female. That kind of equality would make many women want to stick together, and as fans saw in the premiere, Ellaria Sand has taken control, and she is having no more of the Lannister's crap. "Your son is weak just like you, and weak men will never rule Dorne again," she said, just before killing Prince Doran.

It would be thrilling to see more women team up on Game of Thrones. Right now, the women who are trying their damnedest on their own aren't doing too well. Cersei was force on a walk of shame at the end of last season, and now her second child has been killed, leaving her in an intense state of hopeless despair. Margaery Tyrell, meanwhile, thought her sexual manipulation of kings could get her far, and while it's gotten her three queenly crowns, she's now imprisoned with little hope of regaining her title. Even Daenerys, Mother of Dragons, isn't doing too well on her own, being captured by the Dothrakis. These women's circumstances aren't always their fault, of course, and each of them is incredibly powerful, strong, and determined. But with the way things are going, teaming up might make all the difference.

Considering that the show takes place in a patriarchal society where women, especially on their own, are often forced to comply with the rules of men, perhaps forming alliances with one another could bring them more power than they've ever had. After all, working with each other, instead of against one another, (hear that Cersei and Margaery?) is often the best solution. If Sansa and Brienne are the duo to root for at the moment, and the Sand Snakes have literally just taken over Dorne, perhaps the next pairing could be Margaery (once she's set free) and her grandmother, Olenna Tyrell. Olenna is a super schemer who was partially responsible for the death of Joffrey, and if she heads back to King's Landing and teams up with her equally manipulative granddaughter, who knows what they could accomplish.

Then again, perhaps it's Daenerys who'll be forming the all-female alliances; now that the Khaleesi seems destined for the dosh khaleen, maybe there are a few other unhappy women among the group who she can lure to her side and overthrow the Dothrakis holding them hostage. And what about Arya, Melisandre, and even Yara, Theon's Iron Islands sister? Maybe if these ladies can band together or find other female partners to fight, scheme, and work alongside, they'll head down the path of winning the game, and that'd be a Game of Thrones future I can totally get behind.

More like this
'Games of Thrones' Fans May Recognise This 'Conversations With Friends' Location
By El Hunt
20 Photos From The 'Stranger Things' Season 4 Premiere To Make You Feel Old
By Alyssa Lapid
'Gentleman Jack’s Cast & Crew Are Keen On Season 3, Too
By Frances Stewart
The 'It's A Sin' Creator Revealed A Massive Detail That Didn't Make The Final Cut
By El Hunt
Get Even More From Bustle — Sign Up For The Newsletter