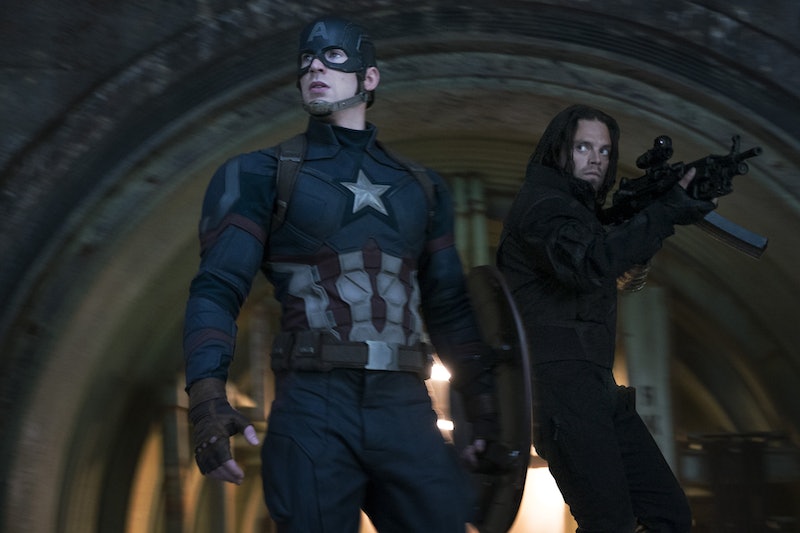 Any Marvel movie fan will tell you that the studio's strategy is to release their films in phases. Phase One began with Iron Man, and consisted of other solo movies introducing the Hulk, Captain America, and Thor; culminating with all of them teaming up in The Avengers. Then came Phase Two, which, in addition to adding more sequels, introduced heroes like Ant-Man, Vision, and Scarlet Witch as the Avengers' roster underwent changes. Now, Marvel's Phase Three is beginning with Captain America: Civil War, and by the conclusion of that film, the Avengers are (minor spoiler!) in rough shape — meaning that the ending of Civil War will affect the future of the Marvel Cinematic Universe (MCU) in a major way.

Phase Three is going to be the biggest phase yet for Marvel. While Phases One and Two each consisted of six movies, Phase Three has a whopping 10 films planned — and many of them are going to be affected by what happens in Civil War . This is because Civil War hardly ends on a happy note. By the end of the movie (big spoilers ahead!), nothing is really resolved as far as the fracture in the friendship between Captain America and Iron Man goes. Cap gives his shield to Iron Man, and tells him that he can have the Avengers, but really, there are no Avengers left for him to have.

Out of the heroes who align with Iron Man in Civil War, it's unclear if any of them remain on Team Iron Man by the film's end. Tony Stark's best friend, James Rhodes, becomes paralyzed during the battle, and will likely never fight again. He suffered this injury at the hands of Vision, accidentally, and now the android feels remorse and probably won't be fighting anytime soon either. Then there's Black Widow, who actually defects to Team Cap during the battle and has a rocky relationship with Stark afterward.

New recruit Black Panther also decides to go against Iron Man and help Cap in the film's post-credits scene, since he only opposed him to begin with because he wrongly believed that the Winter Soldier killed his father. That leaves just one member of Team Iron Man still unflinchingly on his side: Spider-Man. Spider-Man is getting his own solo movie in Phase Three, Spider-Man: Homecoming, and Tony Stark is going to be in the movie. It seems likely that Stark will play a mentor role to Spidey, which is good because he's going to need him around due to the lack of other superpeople currently on his side.

As for those who joined Team Cap (Scarlet Witch, Hawkeye, Falcon, and Ant-Man), all four are in jail for doing so by the end of the film, but are busted out by Cap right before the credits roll. Whether that means they'll join together as a group of secret underground Avengers, or go their separate ways, remains to be seen. Falcon and Ant-Man seem likely to stick around, but Hawkeye may return to his retirement. Scarlet Witch, meanwhile, is struggling with the might of her powers, and may look toward isolating herself for a while.

As for the individual movies in Phase Three, the first few may actually come away largely unscathed from the conflict. First up is this November's Doctor Strange, which will serve as an origin story for the Sorcerer Supreme. Although it's likely that someone else from the MCU shows up in some capacity, as is the Marvel way, the film is expected to be very tonally different from the Avengers' movies and therefore probably won't be all that affected by that team's politics. Ditto Guardians of the Galaxy Volume 2, which takes place in a galaxy far, far away, and Thor: Ragnarok , which also takes place off-world. That gets us through 2017 without the MCU being too affected by the end of Civil War, with the exception of Spider-Man: Homecoming. But in 2018, things MIGHT change in a big way.

The first movie coming in 2018 is Black Panther. That film will undoubtedly be greatly affected by the events of Civil War, since its titular character essentially turns his back on Iron Man at the end of the film and helps Cap by taking Winter Soldier under his protection. T'Challa has also gone back to his native Wakanda, where he now rules as king, and Cap warns him at the end of Civil War that people will come looking for Bucky. T'Challa's response is, "Let them come," suggesting that he is ready to rule his country as its king, as well defend it as the Black Panther. Therefore, he doesn't seem likely to be joining a new team of Avengers anytime soon, which could be a problem by the time the next film rolls around.

That next film is part one of Avengers: Infinity War , in which Thanos attempts to control the entire universe via the Infinity Stones. To do that, he's going to have to finish collecting them, which means taking one from the Nova Corps, taking one from The Collector, and taking one from Vision's forehead. To battle Thanos, it's going to take every Marvel hero in existence, and given the state of how things are looking at the end of Civil War, I have no idea how they're all going to come together in time.