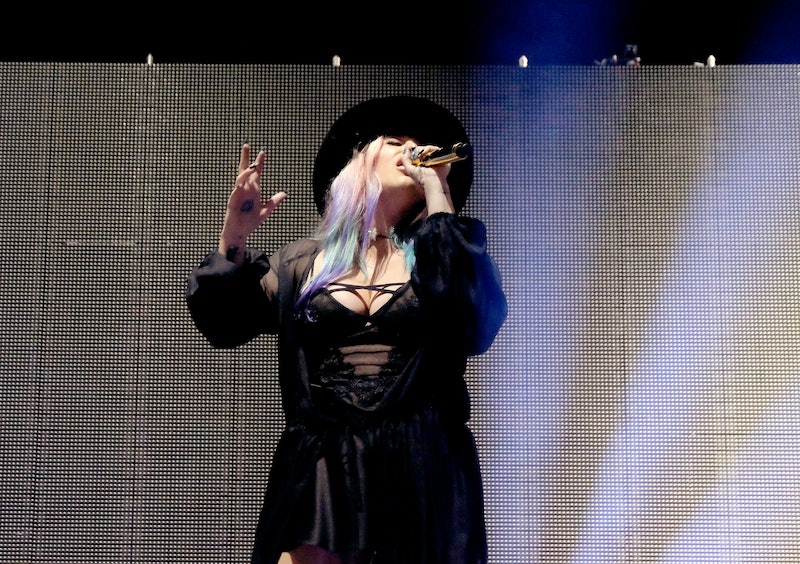 Yes, Kesha! At Coachella 2016, pop star Kesha joined Zedd onstage at the music festival and delivered a powerful and memorable rendition of the producer's song "True Colors." And now we can finally listen to a studio version of that jam on repeat: Friday, Kesha and Zedd's "True Colors" hit the proverbial shelves. Thanks to Kesha's stunning vocal performance and the hauntingly relevant lyrics, the track, which is the singer's first single since 2013, is both a gut-wrenching and beautiful comeback song.

The original version of "True Colors," which features vocals by Rock Mafia's Tim James, appears on Zedd's 2015 album True Colors. On first play, the Kesha rendition of sounds like a fairly straightforward take on the first iteration of the record. However, if you break out the good headphones and pull up your go-to lyrics website and dive into the track, you'll notice it: Kesha made a few subtle, albeit meaningful changes to the words. And when you hear Kesha belt out those altered lines, it is impossible to not think about her grim legal battle against Sony and Dr. Luke.

Consider this lyric from the second verse of the Zedd version:

What we thought we knew/Has been swallowed by the truth

Versus this lyric from the second verse of the Kesha and Zedd version:

What I thought I knew/Has been swallowed by the truth

And this lyric from the final verse of Zedd version:

We’ve escaped our capture/Yet we have our masters

Versus this lyric from the final verse of the Kesha and Zedd version:

I’ve escaped my capture/And I have no master

It's powerful stuff — especially considering the song came out shortly after the very public and ongoing legal battle she's been embroiled in with Dr. Luke (real name: Lukasz Gottwald), the music producer whom in October 2014 she filed a lawsuit against alleging he sexually assaulted and emotionally abused her for a period of 10 years beginning when she was 18. Dr. Luke, for his part, has denied the allegations — in October 2014 he quickly filed a countersuit against Kesha, and then in February 2016 he tweeted the following statement: "I didn’t rape Kesha and I have never had sex with her. Kesha and I were friends for many years and she was like my little sister." Additionally in February 2016, a New York judge ruled that Kesha would be unable to break her contract with Dr. Luke and Sony as she was seeking to do with her 2014 lawsuit, saying:

You're asking the court to decimate a contract that was heavily negotiated and typical for the industry... my instinct is to do the commercially reasonable thing.

Sony has stated that they are committed to supporting Kesha's career following the judge's decision. Speaking to the New York Times in February, an attorney for Sony stated:

When it comes to Kesha, in October 2014, the 29-year-old singer's lawyer released a statement to Billboard when she filed her lawsuit:

More like this
Adele’s All-Female Lineup Includes Kacey Musgraves, Mahalia, & Self Esteem
By Shahed Ezaydi
How Getting An Abortion Has Changed From The ’60s Through Today
By Amanda Chatel
Why You're Seeing Green Bandanas At Abortion Rights Protests
By Lexi Inks
The Most Powerful Photos From The Weekend’s Abortion Rights Protests
By Melanie Mignucci
Get Even More From Bustle — Sign Up For The Newsletter