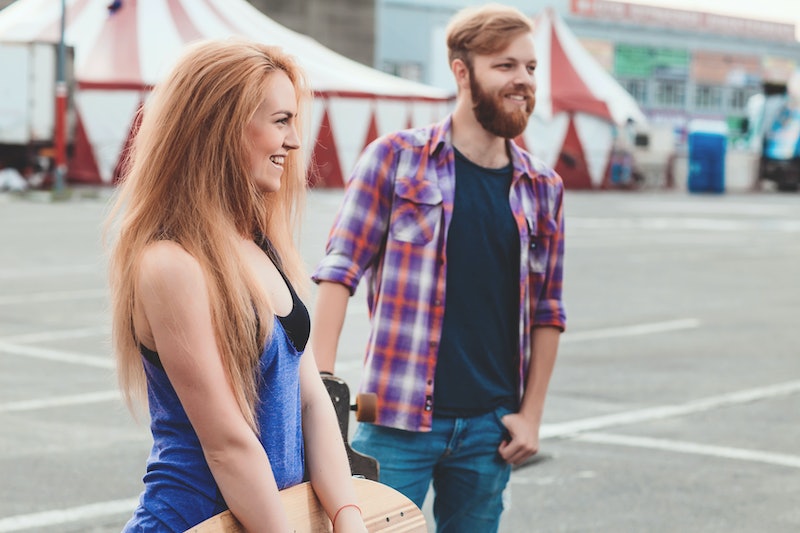 There’s nothing quite as miserable as crushing over someone who's not into you, but it happens. According to research from Psychology Today, 98 percent of people have suffered from the pain of unrequited love at one point or another in their lifetime, so know that you're not alone. Sometimes you just end up falling for someone and, through no fault of your own, they’re just not into you. We can't pick and choose who we fall in love with and we certainly can't make someone see us in a romantic light if they don’t. And yes, it sucks.

But on top of it sucking, you also need to get over that person for your own well-being. You can't spend the rest of your life hoping that they’ll just turn around and suddenly be into you. I’m not saying it couldn't ever happen, but I am saying it's best if you protect yourself and start moving forward.

Just as it is with a breakup, there’s no fast and sure method to get over someone who’s not into you, but you can make changes in your life, so it can be an easier transition. As much as it might pain you at first, you really need to make the first step all in the name of self-preservation. So, if you’re crushing on someone real hard who’s just not into you, here are seven hacks for getting over them. But first, check out the latest episode of Bustle's Sex and Relationships podcast "I Want It That Way":

1. Limit The Amount Of Time You Spend Together

If the person you’re into is a friend, then it’s time to pull back on how often you see each other. I’m not saying you need to go cold turkey, but you definitely need to take whatever amount of time you spend together and cut it in half. If it’s someone you work with, that it might be harder to pull off — but it'll be worth it.

2. Force Yourself To Meet New People

If you’re not dating because you’re holding out for the person who’s not into you, then you’re really doing yourself a disservice. In order to get over them, you need to put yourself out there, date around, have a one-night stand or two if you want. It's time to surround yourself with other opportunities to prove that there are other people in the world!

3. Cut Down On Social Media Consumption Of Their Stuff

Again, if it’s a friend, you may not want to block them, but you need to think of yourself first. You don't have to unfriend them, but if you stop following them, they’ll quit popping up in your feed and you'll think about them less. Granted, that doesn’t mean you won’t cheat and go looking on their Facebook feed anyway, but it’s better than having their posts constantly coming up.

4. Keep Your Texting To A Minimum

If you two text quite a bit, then it's time to limit your communication. Why do you need to text someone you’re trying to get over at all? Unless you’re making plans, something that you should be cutting down on, there’s no need to text obsessively all day and all night.

One of the hardest parts about unrequited love or crushes is trying to figure out what's wrong with you. Well, there’s nothing wrong with you. Nothing at all. It’s just that, for whatever reason, this person just isn’t in to you. You can’t rip it apart and try to figure out why. All you can do is accept it and not beat yourself up about it. Yes, I know, acceptance is very difficult. But you'll get there.

6. Consider Coming Clean About Your Feelings

My father has always told me it’s far braver to be honest about your feelings than it is to fight them. If the object of your affection is noticing the changes you’re making to the relationship, then tell them what’s up. Although, to be honest, they could probably already sense that you’re into them. (When people are smitten, it’s hard not to look at them and not let them know it!) At least in telling them what’s going on, as awkward as it might feel, the truth is out there and maybe they can agree to help by staying away for a bit too.

If you realize that none of these hacks are working, then you need to make a clean break and let that person go. You can't move on or forward, if you have them around, and you deserve to move on and forward with someone who will be as into you, as you are into them. It will definitely hurt, but to quote SATC's Samantha Jones: "I love you, but I love me more." So love yourself more and just get out of there.