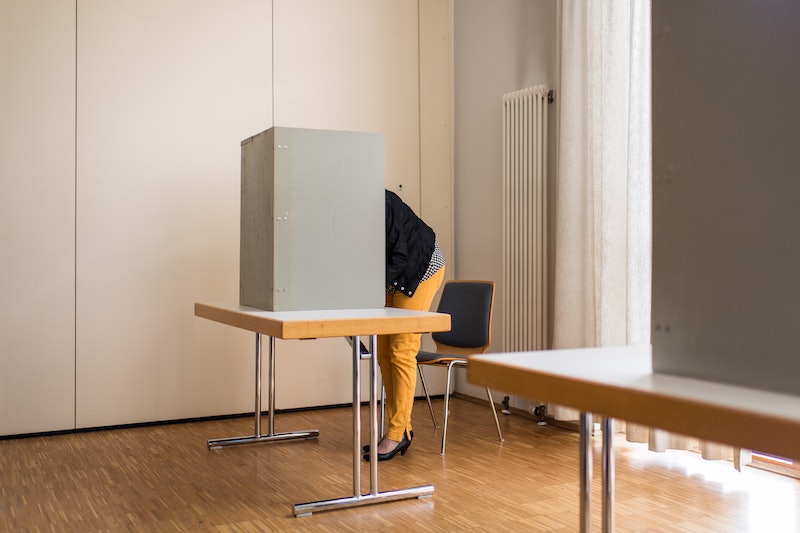 This isn't the first election cycle that the phrase "vote with their vagina" has been thrown around, but with a woman as the front-runner for the Democratic nomination, we're probably not going to stop hearing it any time soon. But a new Funny or Die video shows what would happen if women really did vote with our vaginas. But don't worry — we want our vaginas to be informed voters, so we'll definitely be helping our nether regions out with their research.

The idea that women can't be trusted with the vote is not new; there's a reason women were not allowed to vote when this country was founded — and why it took literally 70 years of organized activism before women were finally enfranchised in 1920. So "women vote with their vagina" might be more crass than saying women are "silly creatures" who can't be trusted with this responsibility, but the idea of discrediting women's ability to make informed political decisions is hardly new. But of course, the updated version comes with the added flavor of reducing women down to our genitalia, so it's nice to see how much progress has been made in the past century.

Women can make sound political decisions. Sometimes those decisions are informed by the fact that women are, well, women, and as such are particularly affected by certain political issues. Sometimes they aren't. Individual women are perfectly within their rights to decide which issues are important to them, and their decision on the subject should be respected. Also: Absolutely none of these decision are taking place in the vagina. There's even research to prove it.

But hey, what if they were?

Let's take a look at what it would really look like if women voted with our vaginas, and how we might go about doing that, as demonstrated by Mary Lynn Rajskub and Funny or Die:

First, Teach Your Vagina To Read

Hey, no one said this was going to be an easy process. At least we're in the middle of the longest election cycle ever right now — there's plenty of time to teach a body part how to read.

Help Your Vagina Get Informed

You can't have your vagina show up at the polling place without knowing what's at stake. I mean, some of these candidates want to bother it with all sorts of laws and regulations, and it needs to know that.

Register Your Vagina To Vote

Show Up To Vote

For some reason, they don't make voting boxes that are convenient for vaginas — which is probably discrimination, now that I think about it. How are women supposed to vote with our vaginas if the polling places aren't even set up for it?

So who wins when the women of America vote with our vagina? Well, you'll have to watch the video to find out, but the most important part is that your vagina got to be part of the political process.