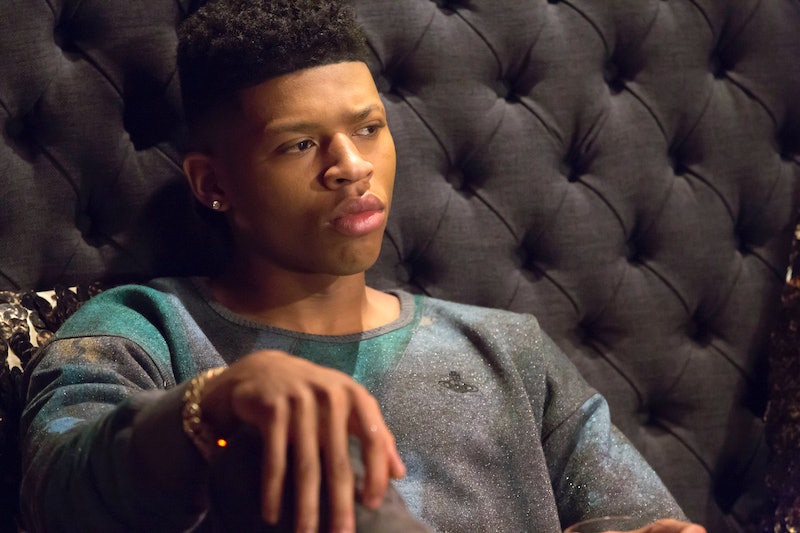 With all of the drama that goes on in the world of Empire, I tend to forget about Hakeem. The youngest son of Lucious Lyon is definitely not drama-free, but his chaos seemed minimal in relation to that of his father murdering everyone he doesn’t like and his sister-in-law being pushed down a flight of stairs in order to kill her unborn child. But, Hakeem, especially recently, is coming to the forefront of stupid decisions on on Empire. Hakeem proposed to his girlfriend of, like, 2 months and decided to baby-proof his apartment upon learning the news that his ex-girlfriend (who is also his father’s ex-fiancée) was pregnant. Remember what I said about drama?

Let’s start with his proposal. Hakeem got with Laura when he discovered her singing at a club and he put her in his girl group. Hakeem is incapable of not sleeping with anyone who he’s working with, so Laura quickly became his girl. There were a few bumps in the road, but Hakeem proposed to Laura after he met her family and realized that they are normal, nice people — also known as the exact opposite of the Lyon pride. The only problem with this? Hakeem is not ready to be engaged. His main example of a relationship is his parents, who were separated for 17 years when Cookie was in prison and they are dysfunctional on their very best day. When Hakeem and Laura had a fight, he spent the day getting drunk with his crew and some strippers instead of, you know, working on their relationship. He assumed it was over, and Laura calmly told him that they were engaged and they were supposed to talk about their problems. Sure, she was mad when she found out he had a baby on the way with another woman, but when are strippers the answer, Hakeem? When?

Speaking of the other woman, Anika is a whole other side of Hakeem’s immaturity. He was hesitant to “man up” for his child at first, but then Hakeem went full Lucious and decided that this baby was going to be his baby and that he was going to be there for it no matter what. To show his newfound responsibility, Hakeem has baby-proofed his apartment — even the Jacuzzi. The solid gold fixtures are now wrapped in plastic rubber duckies. Hakeem has bought the baby plenty, but will he be there for it and Anika when the time comes? I’m not sure. Purchases do not a father make.

When it comes to parenting, well, Hakeem is taking Lucious’ lead on that one, too. Though he says that he will not be like his father, Lucious also threw money at his kids (which is why Hakeem is a spoiled brat) instead of raising them. He let Vernon (RIP) do that instead. Lucious never loved his kids, and I fear that Hakeem won’t figure out how to do that, either.

So, what happens to Hakeem now? Well, hopefully, the women in his life will teach him how to act right. Laura comes from a good family and a fairly normal household, so if he can stick close to her, perhaps the curse of the Lyon family love can be broken.