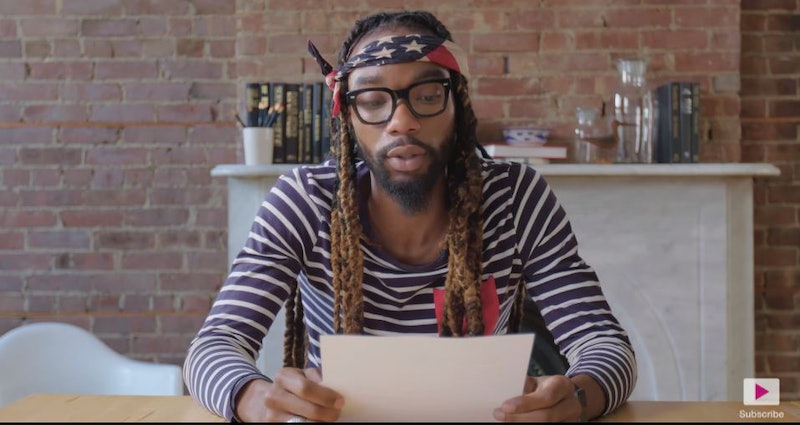 Sexual assault can be a lonely experience, not only because of the stigma our culture heaps upon victims, but also because it's often difficult for outsiders to understand. Teen Vogue 's "Not Your Fault" campaign seeks to foster the understanding victims often don't receive by having men read real accounts of sexual assault. While we often hear statistics about the prevalence of sexual violence, attaching actual victims' stories to this epidemic reminds us that this really is happening all around us, often to people we know, and it affects everyone.

"Some of the survivors who submitted stories wanted to give people another chance at reacting to their story, while others wanted to tell their stories in a way that would allow them to remain anonymous," Teen Vogue 's Vera Papisova says in her introduction to the video series. "We also wanted to provide a safe space that would facilitate a real conversation about sexual assault, and we wanted this conversation to involve the people who are, by society's standards, the least likely to have perspective on this issue."

The stories in the first set of videos come from women and non-binary people, who are the most frequently targeted groups for sexual assault. Men of different gender identities and sexual orientations read the stories to gain an understanding of what it's like to be a member of one of these groups and live in fear of sexual assault. However, men are also frequently sexually assaulted, and the last video tells one of these victim's stories. Here are some highlights from the videos.

1. "It's even harder to speak up if you're treated like you're invisible."

This video shares the story of a non-binary person named Rachael who didn't receive the support they needed after being sexually assaulted by their boyfriend and suffering from PTSD as a result. When Rachael first told their parents, they blamed them for not reporting it or telling anyone. "That's what we do. We blame the victim," one reader observes.

2. "They laughed at my body. I gave them no permission to even see my body."

In this story, a woman named Danielle describes being gang raped by a group of "cool seniors" when she was a freshman in high school. Afterward, nobody would answer her calls, so she didn't tell anyone. She was raped again the same year. Her perpetrators took photos and spread them around school, and she gained a bad reputation for the crimes committed against her. "At least the subway is safe," she wrote. "After all, it's full of strangers."

3. "I was supposed to kick and scream. I did nothing. I was afraid."

This story by an anonymous survivor conveys what it's like to feel pressure to fight back but not know what to do because you're scared, as well as what the aftermath of rape is like. At night, they wrote, "I cried until the exhaustion gave me peace." Afterward, it's revealed that a man wrote the story. One of the readers said he was surprised by the victim's gender because "it really came off being helpless," which reflects the myth that being sexually assaulted makes you weak and therefore less of a man. The story, like many stories of sexual assault, could have been written by someone of any gender. There's also another surprise revealed at the end, but I won't ruin it. Just watch the videos — it's well worth your time.