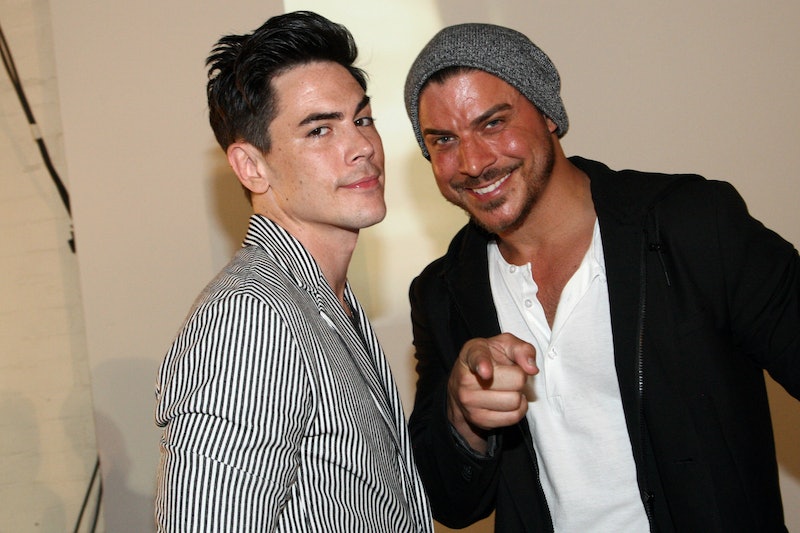 The Kentucky Derby is an historic event that many don't want to miss out on, especially when it comes to picking out the perfect hat to pair with sipping mint juleps. The Derby will hold its 142nd horse race on Saturday, May 7, and many lucky individuals will get to attend, including several famous faces. Would you expect a huge event like this go on without celebrities? I didn't think so. With that, let's talk about what celebs will be at the 2016 Kentucky Derby.

So far, the celebrity guest list is definitely an interesting one that has some very random faces, including part of the Vanderpump Rules cast. Yeah, Jax Taylor and his girlfriend, Brittany Cartwright, Tom Sandoval, and Ariana Madix are all living it up in Kentucky already. If you want a behind-the-scenes look of their Derby weekend adventures, follow them on social media. They all post non-stop. Let's just hope Jax doesn't steal someone's hat and end up in jail.

In addition to the above Bravolebrities, here are a few other celebs who will be spotted at and around Churchill Downs at some point during the 2016 Kentucky Derby.

Seriously, Jax is having the time of life, because he can't stop tweeting and Instagramming about being at the Kentucky Derby.

Would you expect Sandoval to wear anything else? This is just so him.

First, I'd like to thank Ariana for sharing this photo. If you look closely, in addition to Ariana, Sandoval, Jax, and Brittany, you'll spot former The View co-host Star Jones and Say Yes to the Dress: Atlanta's Monte Durham. Talk about a random group.

Of course these two will be there, I mean, they are Kentucky Derby hosts.

Too bad he's not performing with his fellow *NSYNC members.

Clearly, the former Real Housewives of Beverly Hills' Housewife can pull off a Derby hat.

See? I told you it's a very random group of celebs will be in attendance, but this will definitely provide even more entertainment.