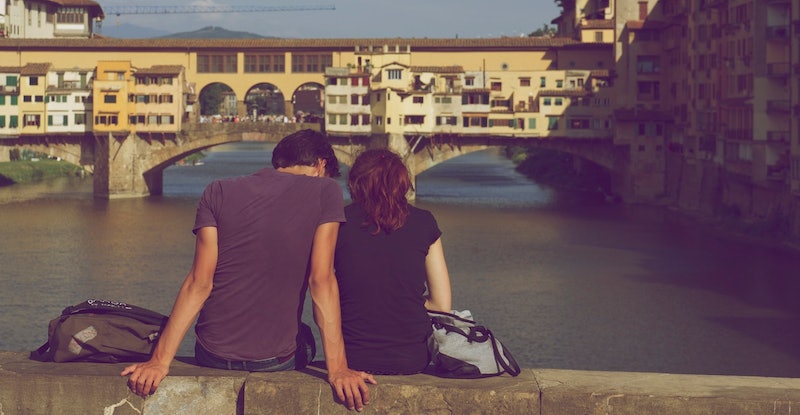 It's no secret that when you're a feminist, dating can be The Worst-with-a-capital-W. You can be enjoying a perfectly nice conversation about the merits of Iron Man versus Batman when — boom! — your date says something totally misogynistic. Suddenly, you're left trying to figure out how to respond to anti-feminist comments without offending your date — if you're even bothering to worry about offending them at that point. Unfortunately, gender equality is still seen as unnecessary in some circles, whether it's because they think men are inherently superior or because they feel equality has already been achieved. (Spoiler alert: It hasn't!)

As a result, being a contemporary feminist often means learning to pick your battles: Do you engage with every well-intentioned mansplainer and ill-informed meninist you come across, a process approximately as enjoyable as beating your forehead against concrete, or do you move on with your life knowing that someone is walking around with a head full of anti-feminist ideas? Ultimately, it's up to you; some people are capable of schooling people about feminism for hours on end without breaking a sweat, while others would rather save their energy for different ways of contributing to gender equality.

That being said, it's much easier to brush off the outdated views of your weird neighbor than it is to ignore an anti-feminist date. Presumably, you're on a date in the first place because you like the person, and that makes it more difficult to figure out how to respond. Fortunately, that's what I'm here for: As someone who just can't shut her feminist mouth even when she tries, I've had plenty of experience with responding to anti-feminist comments, especially on dates. It never hurts to be prepared, so let's take a look at five common anti-feminist comments — and how to respond to them — below.

Why is this still a thing? Patriarchal societies certainly provide advantages to men, but they also impose a culture of toxic masculinity that ultimately hurts them in ways that I've previously outlined. Admittedly, feminism has historically been divided on whether men can be feminists, but these days, it's widely accepted that it benefits everyone. After all, feminism is about gender equality — not asserting women's superiority and oppressing men, but providing everyone with equal rights.

Short answer: Feminism advocates for gender equality, not oppressing the oppressor, so no, I don't hate men.

To be fair, this isn't anti-feminist so much as simply ignorant. The idea that feminists shouldn't want children is akin to the idea that they hate men: Because feminists advocate for women to make their own life choices, it's assumed that they all distance themselves from traditional goals and values like having a family. However, feminism is about allowing women to have a choice in the first place. Gender equality means that women who don't want children don't have to have them, and women that want them can have as many as they want.

By the way, feminism advocates for men to have choice as well — if they want to stay home and take care of the kids, they should absolutely have the option.

Short answer: Feminism doesn't dictate whether you can have a family; it actually advocates for everyone to have a choice in the matter.

Although it's true that misogyny affects different groups in different ways, feminism's got this covered. Welcome to intersectional feminism, which recognizes that you can't have gender equality without including everyone: people of color, LGBTQ people, people with disabilities, and other marginalized groups. Everyone has intersecting identities, and it's possible to be aligned with multiple minority identities at once — including women. Furthermore, dismissing one group's experiences because "others have it worse" accomplishes nothing, because the fight for equality isn't a competition. It's about providing a level playing field for everyone.

Short answer: Some people face different kinds of discrimination, but that doesn't take away from everyone else's experiences. They're all interconnected, and feminism is about equality for everyone.

One of the numerous privileges men experience in a patriarchal society is the ability to float through life without noticing the discrimination directed at other people, because it doesn't apply to them. However, people who make this kind of comment also tend to be quick to dismiss women's experiences with sexism. (It's also worth noting that men aren't the only ones who say this; women are perfectly capable of being anti-feminist as well.)

It's fairly childish logic, and needless to say, it's also incredibly untrue. Ask anyone who's identified as a woman, and she's almost definitely experienced street harassment, the effects of the wage gap, objectification, and a multitude of other disadvantages from being a woman in a patriarchal society.

Oh, boy. Two years after #NotAllMen became the subject of feminist derision and meninist adoration, it's still a common refrain in arguments against feminism: Not all men harass women, or commit sexual assault, or any number of the lovely ways misogyny manifests in society. As Time succinctly explained, it "redirects a discussion about sexism, misogyny, rape culture, or women’s rights to instead be about how none of that is his fault," thereby totally derailing what could be a productive discussion about feminism.

Needless to say, making men the center of attention is totally unhelpful — no, not all men are terrible, but that doesn't negate the effects of the patriarchy. In fact, rushing to emphasize individual culpability in sexism is totally unhelpful because it allows people to ignore the way society as a whole is set up to benefit men, whether you actively participate or not.

Short answer: Let's go with the hashtag that surfaced as a rebuttal to #NotAllMen: No, not all men actively harm women, but yes, all women are negatively affected by the patriarchy.