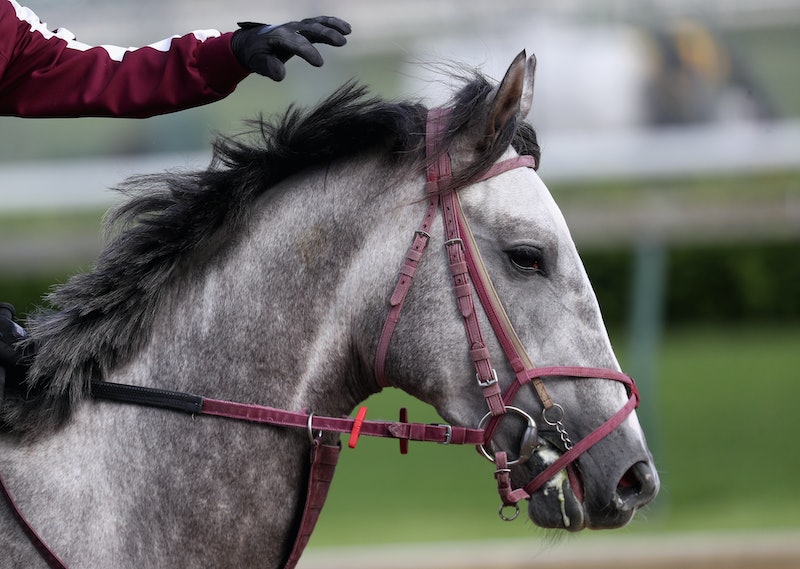 With big hats and extravagant parties, the Kentucky Derby is a major social event. But don't get too sidetracked by the festivities that you forget the main reason people come together: the horse-racing. Some people enjoy placing bets, but I'd much rather focus on their names. Did you know that horse names can only be 18 characters long? That's way more restrictive than a single tweet. According to Mental Floss, it's also a rule that horses cannot be named after living people, "unless written permission to use their name is on file with The Jockey Club." This is unfortunate, since if I had a horse, I'd totally want to name it after my favorite celebrities. Wouldn't you cheer for a horse named The Biebz?

Luckily, since horse namers can be incredibly witty, they sometimes find ways around the regulations. In 2005, there was a horse named Brangelina, according to Bleacher Report. Since it's Brad Pitt and Angelina Jolie's portmanteau, that's certainly a loophole in the naming rule. Or a much better alternative would be if famous people gave permission for their names to be used. Honestly, I think some celebrity monikers would double as excellent horse names. Wouldn't it be an honor to have a four-legged creature racing on their behalf? It's an accomplishment almost as noble as winning that Oscar or Grammy, right? (OK, maybe not quite. But let's pretend anyway.)

Here's a round-up of celebrities that could (and should) inspire the best Kentucky Derby horses names.

Considering she's just a toddler, I'm unsure if Blue Ivy could sign off to have a horse named after her. But wouldn't Beyoncé and Jay Z's daughter's name be pretty fierce for a race horse?

Unfortunately, his name is too long to meet the 18-character limit. Still, I'd root for a Benedict Cumberbatch inspired horse.

Last Week Tonight host John Oliver made a campaign to "Make Donald Drumpf Again," spoofing Donald Trump's ancestors' original surname. I wouldn't want to give Trump the privilege of a horse named after him, but "Drumpf" is pretty fun to say.

As Beyoncé sings in "Freedom," "A winner don't quit on themselves." That could be this horse's motto. It would be guaranteed to win big.

JGL's name is a little too long to work, but maybe just his first initial could be thrown in front, so the horse would be named J Gordon-Levitt.

Compared to his fellow bandmates, I feel like Chris Kirkpatrick doesn't get as much acknowledgment as he should. A horse name would totally change that.

Instead of just naming the horse Drake, let's go with the singer's Instagram handle. I wonder if throwing in the "@" symbol is allowed. If so, I'd tack it on front.

This nickname is one that Taylor Swift has even used for herself, so why not use it on a horse?

Since Aziz Ansari's show Master of None includes animal-related quirks, like a turtle in a briefcase, I feel like he'd appreciate a horse being named on his behalf.

I'd be lying if I said Mason wasn't one of my favorite members of the Kardashian-Jenner crew. Plus, he has such a strong-sounding name.

If any horse namers need further inspiration, they should totally hit me up. I could keep going on and on with the perfect celeb-inspired derby names.