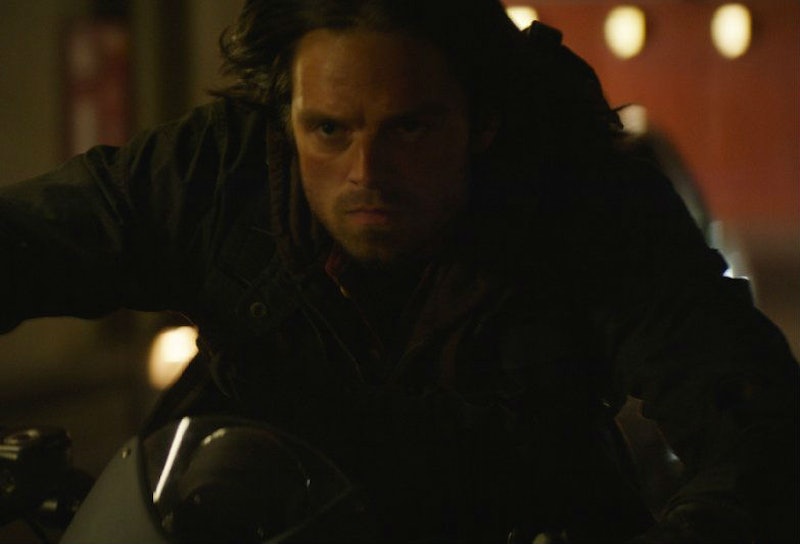 Given that Marvel's newest film, Captain America: Civil War, is the biggest movie they've ever done, it's pretty much a given that not everyone is going to survive the battle royale. And of all the candidates who seem most likely to perish, perhaps no one is making fans more nervous than Bucky Barnes, AKA the Winter Soldier. Obviously, if Bucky dies in Captain America: Civil War , then there's going to be hell to pay, since the character has basically won the hearts and minds of everyone on the internet — especially the very vocal #TeamStucky contingency. So do Marvel obsessives have reason to freak out?

Stucky fans can breathe a sigh of relief: Bucky does not die in Civil War. He is inadvertently the cause of the war (or rather, Zemo impersonating him is), so it stands to reason that his fate could hang in the balance. But even though he does make it out alive, there are several tense moments that put him in great danger. Black Panther's father dies in the terrorist attack for which Zemo frames Bucky, which puts the metal-armed antihero squarely in the Wakandan warrior's sights — not a good place for him to be.

Bucky is also captured by the government and imprisoned, which doesn't bode well for him, and he only escapes because Zemo activates him as the Winter Soldier, which turns him back into a villain and puts him in direct conflict with basically everyone, even those on his side. But those threats pale in comparison to what happens to Bucky at the end of the film.

Although he survives the fight, Bucky does not make it out unscathed. During the movie's climax, Zemo reveals to Iron Man that Bucky killed Tony Stark's parents, which causes Stark to attack Bucky (and by proxy, Cap). The fight gets extremely intense, and near the end of it, Iron Man blasts off Bucky's metal arm — taking him out of commission. It initially appears that Bucky might be dead, but he somehow manages to save Cap from certain death at the end of the fight with his good arm. This allows Cap to come out on top, and the two old pals then leave together.

The whole "having one arm" thing does not get resolved in the film, but the door is left open for Bucky to return in a future MCU film — and soon. In a post-credits scene, one-armed Bucky is with Cap in Wakanda at the Black Panther's palace. T'Challa agrees to take Bucky in as penance for trying to kill him after wrongly blaming him for his father's death. Bucky goes back into cryostasis, so as not to cause anymore pain to anyone, and Cap warns T'Challa that he's putting himself at risk by housing Bucky. T'Challa is up to the challenge though, and welcomes any and all intruders who would come looking for the Winter Soldier.

So although Bucky isn't killed in Civil War, he is seriously injured and willingly takes himself out of action at the end of the film. But given that he is currently in Wakanda, and that he is on a lot of people's hit list, a return to form in 2018's Black Panther seems possible for the Winter Soldier.