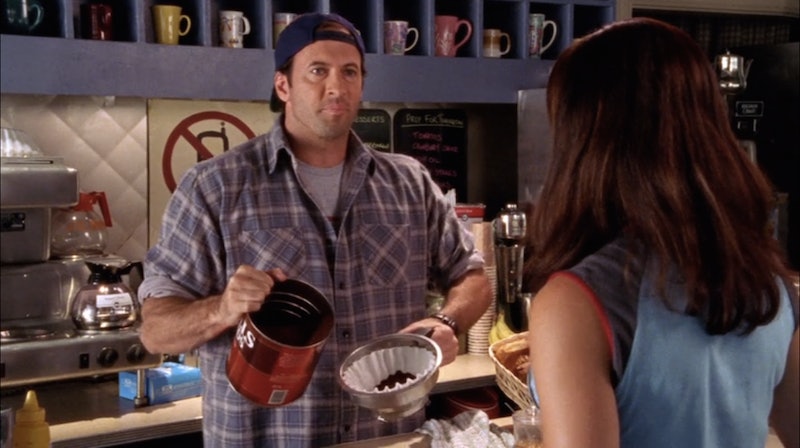 Not a day of my life goes by lately without some huge announcement from the Gilmore Girls revival set. Whether it’s a picture posted of Rory and Logan together again or news that yet another Broadway star has joined the revival, there always seems to be something to get excited about for the upcoming four-part revival. But it’s been a few months since the series started filming, and after announcement overload, I feel like the surprises are going to stop coming. They have to dwindle out eventually, right? Wrong. Because in a tweet on Friday, Scott Patterson implied that a big Gilmore Girls announcement was attached to his Gilmore Guys podcast episode, which goes live on May 11. And as much as I’m dying to listen to his interview while sitting on the edge of my seat, I’m also wondering: What else could this guy possibly have to announce about the Gilmore Girls revival?

With pretty much every single original cast member already slated to return to the show and specific details about the plot being kept on the DL, there isn’t much left for him to reveal on his episode of the Gilmore Guys podcast. But reveal something he supposedly is going to do.

So what could Patterson be revealing in just a matter of days? Let’s run through the list of possible theories that he could either confirm or deny with a simple wave of his diner wand.

This is what I’m hoping for. I’m a planner, and the fact that I don’t have this in my calendar and have already started planning around it stresses me out to no end.

With rumors of a potential wedding taking place, speculation over whose it would be has been running high. Patterson could put all of our conspiracy theory-loving hearts to rest by just giving us two names.

Will it be Jess? Dean? Logan? Herself? Come on, Luke, tell us everything.

That Luke And Lorelai Have A Child

Can you imagine the neurotic little grump their spawn would be?

That He No Longer Owns Luke’s Diner

I’m hoping that whatever news he has has something to do with his character, because if I’m hoping for one thing from this revival is progression.

That Sookie Is Being Rewritten Into All Four Episodes

Back to the drawing boards! Long live Melissa McCarthy!

Tune into the Gilmore Guys podcast on May 11 to find out what Patterson reveals, and then report back here, because you Imma wanna talk about it.