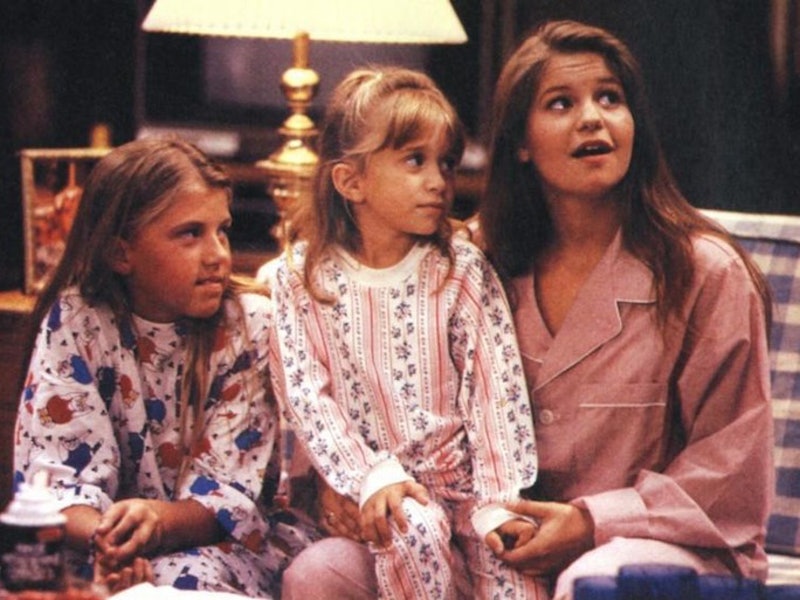 Millennials: we didn’t know what we had until it was gone, so we demanded that it come back. Thanks to the collective yearning of '90s kids everywhere for the pop culture of the past, television studios have responded to our reminiscing and provided a wave of remakes or reboots. From TNT's modern spin on Tales from the Crypt to the return of the beloved Gilmore Girls , Hollywood has made 2016 the year of the TV nostalgia — but why?

The question is worth considering, as more than a dozen shows from the '80s, '90s and early 2000s, from the butt kicking Xena: Warrior Princess to Nick's L egends of the Hidden Temple , have found and will be finding new life between 2016 and 2017 in the form of miniseries, full-length shows and TV movies. Classic feature films are also getting the small screen treatment, like NBC's much-anticipated Cruel Intentions remake. Then there are cartoons; fans of '90s Nickelodeon are still celebrating The Splat, an eight-hour nighttime block of cartoons that originally aired on the channel between the '90s and early '00s. The Splat itself is an extension of The 90s Are All That, the previous two-, then four-hour cartoon block that came to be in 2011 because of a demand for the good ol’ days that gained steam on Facebook. Add that to the Hey Arnold movie that was announced in November, and cartoon fans are in for a treat.

Clearly, nostalgia is in. Yet while it’s never a bad idea to profusely rock out to “Bye, Bye, Bye" on Spotify or marathon all nine seasons of Rugrats, why is this '90s flashback montage we’re currently living in happening, and what does it actually say about us as the people consuming it?

“When people experience negative affect and loneliness, they may be more likely to experience nostalgia,” says Chelsea Reid, an assistant professor of psychology at the College of Charleston, whose research includes the study of nostalgia. “Which helps [them] kind of overcome a negative experience that they’re having.”

Dr. Reid explains that because millennials are in the middle of a transitional period in their lives — starting careers, living independently and paying bills — they're looking to hold on to a simpler time, when responsibilities didn’t all occur at once. This results in the very definition of nostalgia: a bittersweet longing for an individual’s valued past, i.e. our obligation-free childhoods, filled with all the TV shows that are now getting reboots or revivals.

“Transitions can be stressful and nostalgia is a resource for the self, so [these shows are] one way to cope and adjust to those changes,” Dr. Reid says.

This isn’t to say, though, that millennials are just a group of sad mini adults who can’t deal with work and life obligations and whose stress is the only reason they revisit the pop culture they loved as kids. “Nostalgia is just as relevant when people are celebrating good times,” explains Dr. Krystine Batcho, a professor of psychology at Le Moyne College. “It’s just that you can feel nostalgia more intensely during more dramatic parts of your life, like when you’re undergoing some sort of transformation, transition or decision making.”

The peak time period in life for nostalgia is somewhere between ages 18 and 34, adds Dr. Batcho, the exact age range for millennials. When it comes down to it, Dr. Batcho explains, it’s not about wanting to be a child again; nostalgia just grounds us in who we are and helps when we’re securing our work/financial/relationship stability during this crucial developmental stage.

“When people want to remember who they were, it would be socially unacceptable to carry an old teddy bear or Barbie doll around with you,” Dr. Batcho says. “So a TV reboot serves as a nostalgic trigger that’s socially acceptable and not childish. It’s a recognition that it’s not about going back to the way things were, but updating the past and making it new again.”

The recent demand for the pop culture of old began most significantly with the aforementioned The '90s are All That. A Facebook page of the same name was created in 2010 with the intention of getting Nickelodeon to re-air popular '90s cartoons and shows, like Rocket Power and Clarissa Explains it All. It succeeded, and a nightly two-hour block on the network was created in 2011. In the following years, '90s nostalgia as a whole took hold upon our culture, with trends and products like tattoo chokers, jelly sandals, and French Toast Crunch cereal all making returns, not to mention the reunions of iconic '90s groups like the Backstreet Boys and the Spice Girls. But it wasn't really until 2014 when TV nostalgia began to truly take hold, as that was when Fuller House, Netflix's revival of Full House, was first announced, and the public went wild.

After that, slowly but then seemingly all at once, announcements of TV movies, continuations of beloved shows, and new spinoffs of series and films from 10, 20 and 30 years prior were made. 2015 alone saw announcements of Fuller House (which has since been picked up for a second season), Twin Peaks, The X-Files, Fantasy Island, MacGyver and Lethal Weapon, among others. Two TV movies, based on the making of Beverly Hills, 90210 and Full House, also aired on Lifetime; both came on the heels of 2014’s Saved by the Bell TV film. It's clear that Hollywood has taken our collective longing and run with it, and according to Kim, it's no surprise why.

“With Hollywood, everything is about money,” says Albert Kim, a television producer and writer who’s worked on shows like Sleepy Hollow and Nikita. “So as long as it’s profitable to keep doing these things, they’re going to keep doing them.”

But, as with any trend, Kim questions the lifespan of this reboot trend. “It’s arguable how creatively successful you can be with these reboots because you run the risk of being seen as another remake, rather than thinking of something original,” he says. “Where are you going to find the next Star Wars or Star Trek if you’re constantly recycling old properties?”

Hollywood’s cyclical tendency to follow what’s been popular in the past is not the only reason reboots are happening, though. Kim explains that there's less monetary threat for a studio if it makes a reboot than an original show, as it can be cheaper to invest in existing properties rather than original properties. Even if the reboots don't do as well as expected ratings-wise, the damage to the studio is likely not severe. That said, if many reboots aren't successful financially, Hollywood could start rethinking its methods.

“This upcoming season will be a critical one in terms of reboots because, while there are many in the works, not all of them will succeed,” says Kim. “And if a large portion of them don’t, then studios may start shying away from them.”

Given the success of new shows like How to Get Away with Murder and Empire, reboots could also suffer by losing out to can't-miss original programming. While the season finale of The X-Files reboot, for instance, drew in 7.60 million viewers, according to TV By The Numbers, Empire ended on a stronger note with 10.88 million viewers. Despite viewers' love for the past, many of them, it seems, chose to spend their time watching a new show rather than revisit one from the '90s, and that could prove dangerous given the amount of reboots and revivals coming our way during the coming season. Whether or not they're bringing back our favorite childhood TV shows, this reboot overload could send the kingdom crashing down.

That's not necessarily a bad thing, though, as it could lead to more original content that viewers will connect with. “I’m happy to see the new X-Files,” says Kim. “But at the same time, I would love to see what’s going to be the next X-Files."

And perhaps 20 years from now, the new generation of nostalgia-loving 18- to 34-year-olds will be getting ready for a reboot of that show.