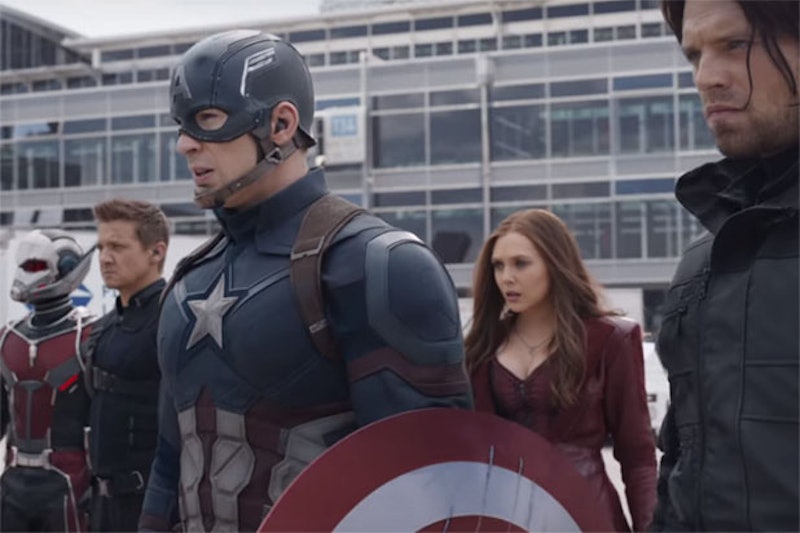 If you're an impatient Marvel fan who spent time searching for Captain America: Civil War spoilers before hitting your neighborhood movie theater, you're already well aware of how Cap and his crew fare at the end of the newest film. But if you still haven't watched the film and are avoiding spoilers like the plague, you might want to skip this article. Go make yourself a snack or, I dunno, actually go see the movie — trust me, it's worth it. Because not only will this piece contain spoilers from Civil War, it'll discuss the possibility of Captain America 4 happening, and all the intriguing stuff that movie could include.

As those who saw Civil War know, there are numerous twists and turns in Marvel's latest movie that basically confirm that there will be another Captain America movie someday soon. Basically, Steve says, "Boy, bye" to Iron Man at the end of the movie and sets out on his own path without the Avengers. You know Marvel isn't just going to leave fans hanging without expanding on this storyline, and it's not going to be enough just to see it play out a bit in 2018's Avengers: Infinity War. But even if Captain America 4 does come along, it won't be in the immediate future. Instead, Marvel's upcoming slate will feature a whole slew of brand new superhero additions to the MCU, and so here's a preview of what you can look forward to seeing before a fourth Captain America.

I, for one, am so ready this character's movie. His home planet of Wakanda makes an appearance in Civil War and the post-credit scene totally sets this story up. Directed by Ryan Coogler, Black Panther comes out on February 16, 2018, though release dates are totally apt to change this far in advance. As far as I am concerned, it can't get here quickly enough.

This makes me absolutely elated. If you're not on the Captain Marvel train yet, you might wanna explore her character a little bit more. She might make an appearance in Avengers: Infinity Wars Part I, set for release May 4, 2018, and she's currently set to get her own movie in 2019. which means you have about two years to become an expert on this character. The best news of all? Two badass female screenwriters are penning the Captain Marvel movie.

Many folks are speculating that Bucky could become the next Captain America. Chris Evans' last Marvel movie under contract was Civil War, which means that Cap's shield could potentially be passed to someone else. If the movies are going to follow the comics, Bucky is one of two characters who takes over for Steve in the comic books. I'm placing my money on this costume-change happening soon.

Tony Stark's bigtime leadership role at the end of Civil War suggests that he will be the main focus of Avengers: Infinity Wars Parts I and II.

During a Q&A at Oxford University in early 2016, Whedon expressed his frustrations with how his take on The Avengers turned out:

The fact that Marvel gave me that opportunity is so bonkers, and so beautiful, and the fact that I come off of it feeling like a miserable failure, is also bonkers, but not in a cute way.

Whedon added that he made a "clean break" from Marvel, which means he might have the time to make that Buffy movie I've been longing for. See? It all works out!

So, while fans might have to wait awhile for another Captain America movie, there's plenty more of the Marvel universe to look forward to in the meantime.