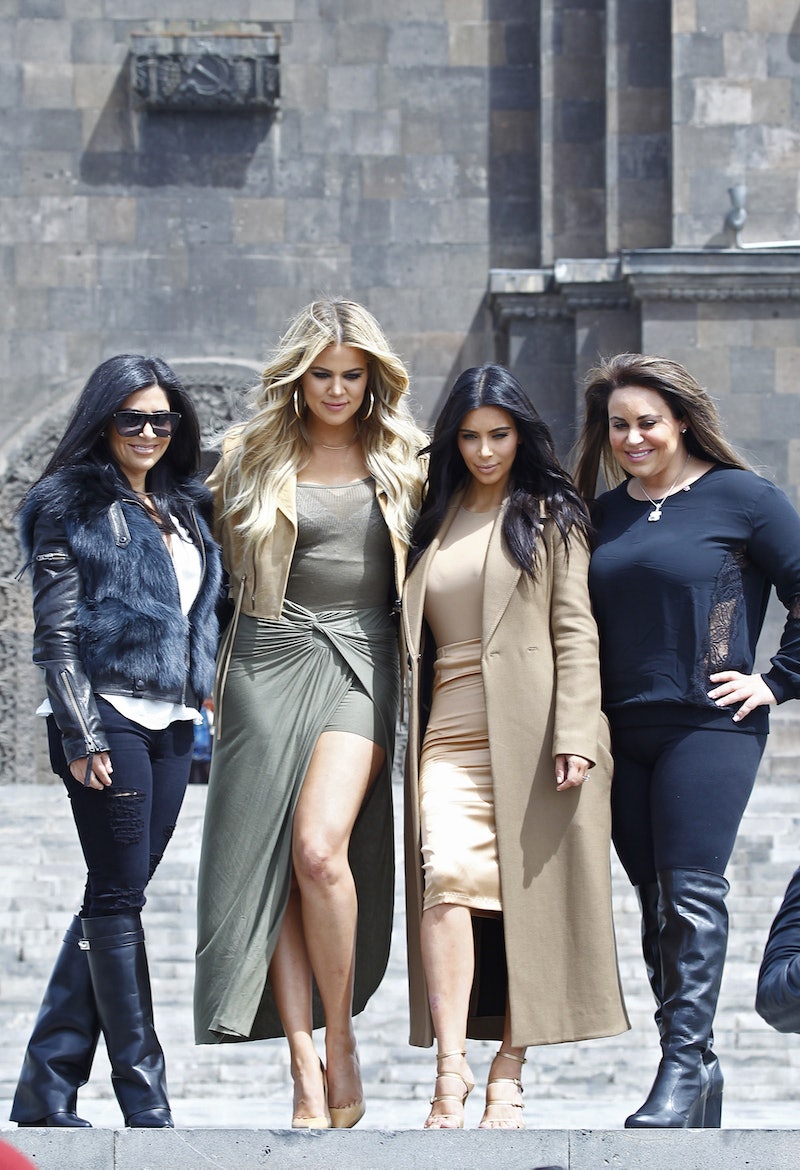 AFP/AFP/Getty Images
By Allyson Koerner
May 9, 2016

Kim, Kourtney, and Khloé Kardashian aren't the only famous Kardashian family members with "K" names. That's right, they have three cousins who also all have "K" names and resemble the famous reality TV family. I know, it's kind of crazy, but also so fitting, right? So, just who are the Kardashian cousins? Well, one thing remains certain, they may look like the Kardashian sisters and have similar names, but they most definitely don't seem to be anything like their very famous relatives.

If you recall, during a September 2015 Keeping Up With the Kardashians episode, Kim and Khloé traveled to Armenia to pay their respects on the 100th anniversary of the Armenian Genocide. Well, they made the trip a family affair. Not only did Kim's daughter, North West, and husband, Kanye West, tag along, but so did two of her three cousins, Kourtni and Kara. Yes, there is another Kourtni Kardashian out there, but just with a different name spelling. The other "K"-named cousin (and Kara and Kourtni's sister) is Krista, who did not make the trip. Obviously, "K" names are popular in this family.

During their April 2015 travels to Armenia, Kim took to social media to share her experiences, which also included a photo with Kourtni and Kara. Alongside an Instagram of Kim, Khloé, Kourtni, and Kara, meeting with Armenia's Prime Minister Hovik Abrahamyan , she wrote, "Khloe & I brought along our cousins Kourtni & Kara Kardashian. We miss you Krista! Yes we have 3 cousins who are sisters that all start with a K too! LOL."

So, in addition to appearing on KUWTK and having similar names as their cousins, what else is there to know about Krista, Kourtni, and Kara? Unfortunately, there isn't much information circulating on the Internet about them. It appears that none of them even have social media. As far as I can tell, the only time they've shown up on Instagram or Twitter is thanks to KUWTK or when their famous cousins have shared photos, like this one:

Unlike the Kardashian clan, it seems that Krista, Kourtni, and Kara live a very quiet life and stay out of the spotlight. I mean, even during their KUWTK appearance, the cousins said to them, "You guys are so famous," which just goes to show you that they were surprised by their relatives' lifestyle.

Even though not much has been heard about the Kardashian cousins since the Armenia episode, that doesn't mean they might not pop up again on the E! reality series. Plus, seeing as they are Kardashians, they could very well become famous overnight, just like their relatives. Maybe they'll even partner with Kim, Khloé, or Kourtney on a some type of project or for a new product they're promoting.

Whatever the case, and despite not much info being known about Kara, Kourtni, and Krista's lives, I doubt this is the last Kardashian fans have seen and heard from them.