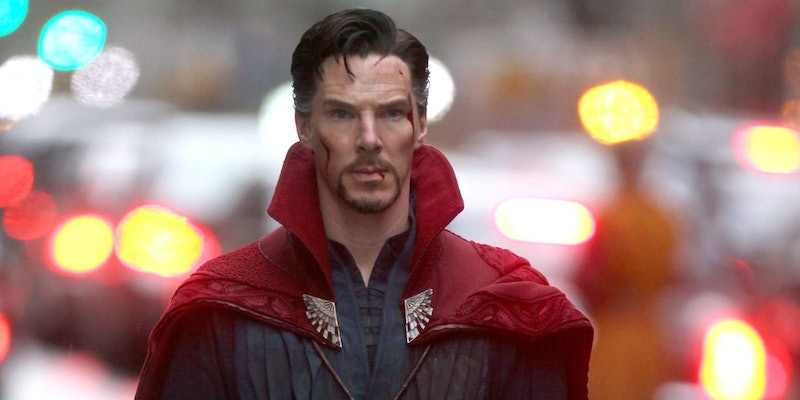 It would appear that the answer has to do with the fact that Dr. Strange is a little busy doing his own thing (because, you know, being Sorcerer Supreme is a fairly time-intensive endeavor). Marvel President Kevin Feige explained to Zap2it in 2015 that "Doctor Strange ... is kind of [in his own world]. He’s in New York, but he’s a surgeon and he’s got his own thing going on, and when he has to try to fix his hands he goes on another journey.” So, it would seem that it just didn't make sense to include Dr. Strange in Civil War because his story doesn't intersect with that of the other Avengers at this point in his journey.

Also, Dr. Strange is getting his own movie in November 2016, and I would speculate that his inclusion in Civil War could've potentially caused filmmakers to feel obligated to tailor the new movie's storyline to the action that was started with the character in Civil War. But since he doesn't appear in Civil War, there's a lot more freedom for the setup of the Dr. Strange movie. Additionally, since Benedict Cumberbatch is playing Dr. Strange in the upcoming film, it could be that his schedule prevented him from participating in Civil War. The studio obviously wouldn't cast someone else to play the superhero just for this film, so if Cumberbatch wasn't available, it would just be easier to not include Dr. Strange at all. And, since there were already so many other Marvel characters appearing in the film, Dr. Strange's absence wouldn't feel like an overwhelming loss.

However, the Russo brothers do know that Marvel fans love this character and are excited to see him in his own film. They therefore released a juicy piece of info to fans: the revelation of which side Dr. Strange would have been on had he appeared in Civl War. The directors posted a fan-made GIF on Facebook which features Dr. Strange running with Captain America's team, along with the caption "Dr. Strange is on ‪#‎TeamCap‬."

If you're bummed that you didn't get to see Cumberbatch hanging out with Chris Evans, you're in good company. But Dr. Strange will be here before you know it, showing that the MCU leaves no man (or superhero) behind.