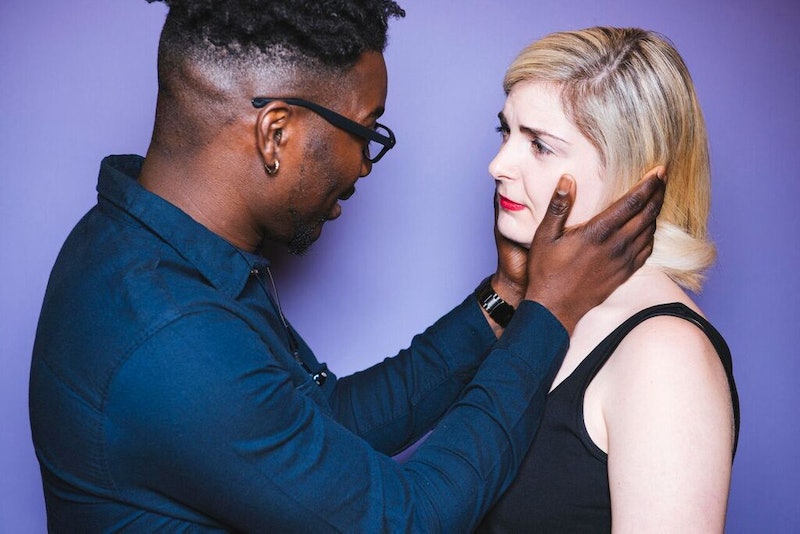 When a relationship is new, everything feels light and easy. You can't keep your hands off each other, every night is a date night, and the world feels like a more beautiful place. But even the happiest of days can eventually lead to a rough patch, and it can leave you wondering if the relationship is worth saving.

If this describes your relationship right now, then let me start by saying that arguing with your SO is totally normal. It can even be healthy, as you both learn to hash out your differences, and come to fair conclusions. As Harriet Lerner, Ph.D., said on Psychology Today, " A good fight can clear the air, and it’s nice to know we can survive conflict and even learn from it. Many couples, however, get trapped in endless rounds of fighting and blaming that they don’t know how to get out of. When fights go unchecked and unrepaired, they can eventually erode love and respect, which are the bedrock of any successful relationship."

And that can lead to the aforementioned questioning. Should you stay? Should you run for the hills? Of course, sometimes relationships are worth ditching, especially if they are epically bad, abusive, or dangerous. When that's the case, take steps to move on. Other relationships, however, are pretty solid, but simply need to be repaired. If that sounds like yours, then here are some signs your relationship may be worth saving.

If you've ever ended a relationship, then you know the "done!" feeling very well. You pack your bags, open the door, and stroll out into the world — and you don't look back. But when a relationship is worth saving, you may find yourself feeling sick at the very thought. “Chances are, if you can’t sleep at night because you feel so torn about your thoughts about leaving, it means that there are some valid reasons to consider staying and fixing what isn’t working," noted Carolin Lehmann, in an interview with relationship expert Michele Weiner-Davis on HuffingtonPost.com. So start focusing on the positives, and remembering what got you into this relationship in the first place.

2. You Enjoy Spending Time Together

Sure, you may be arguing a lot more often. But if your SO is still your favorite person, and you enjoy hanging out, then it might be a sign things shouldn't come to an end. "After all, one of the primary reasons for being around another person is that it’s fun and enjoyable at least some of the time," said Robert Weiss, LCSW, CSAT-S, on Psychology Today.

3. You're Both Mad About The Wrong Thing

Take a second and think about the root cause of all your problems. Are the fights mostly based around your true dislike for each other, or are they stemming from something else? If the latter is the case, take a step back and get mad at the right thing — your job, your family, whatever else is bothering you — and leave your SO out of it.

4. The Idea Of Your Partner Moving On Makes You Sad

If you are oh so done, then the idea of your partner moving on doesn't seem that horrible. But if your not? The thought of them snuggling with someone else will feel downright bad. "It sickens you to know you’ve lost something so precious — the safe, loving intimacy that once defined your coupledom — and you desperately want that back, even if you’re not quite ready to do what it takes to resurrect it," said Mélanie Berliet on ThoughtCatalog.com.

5. The Problems Aren't Specific To The Relationship

It can be pretty tempting to think about how much easier life would be with someone else. But deep down, you know that probably wouldn't be the case. “When things become challenging or frustrating or unsatisfying in a marriage, it is common to develop the fantasy that there must be something out there that’s better ... But, typically, the challenges you are facing in your [relationship] are ones that will eventually surface with someone else as well..." noted Lehmann, in an interview with psychotherapist Elisabeth LaMotte on HuffingtonPost.com.

Sure, you two may differ on a lot of things, and that's OK — it's what makes a relationship fun. As long as you both share the same core values, it may be worth working through the issues. As Weiss said, "Two people are never going to agree on everything. But if there is at least a little common ground regarding religion, politics, finances, education, and the like, there is a decent foundation upon which to build."

7. The Idea Of A New Partner Grosses You Out

If you were truly ready and willing to move on, the idea of all those other "fish in the sea" would send you skipping happily to the nearest bar. And yet, something stops you. "You don’t want to think about all the other great candidates out there — even the wealthier, more attractive, kinder ones. You don’t want to be reassured of your market value, either. You’d rather things just went back to the way they were," Berliet said.

8. You Only Mention Breaking Up When You're Angry

I know I say dumb things when I'm mad, and I'm pretty sure everyone else on the planet does, too. So if break up threats and mean words fly freely during an argument, it may not be worth paying them any attention. As Anna Davies said on YouBeauty.com, "Sure, the words are incredibly hurtful, but that doesn’t mean it’s what your partner truly wants ... Speaking calmly and openly after the fight can help you both parse out how you really feel and if the relationship is worth saving."

9. Your Complaints Are Kind Of Silly

Things can start to feel way worse than they truly are, especially if your relationship is struggling. So take a second and think about what the fighting is really all about. Are your complaints petty, and kind of silly? It could be that you both need to sit down and talk about why your feelings are so easily hurt. It may be just what's necessary to help fix your problems.

After you've been dating someone for a while, it becomes pretty easy to know exactly how to cut each other down. You know each other's fears, and insecurities, and the whole relationship could go up in flames instantly if you unleashed some true meanness. And yet, you don't. As Berliet said, "No matter how nasty the arguments get, you still hold back the really nasty stuff. Something always stops you from going to the pitch-black place from which there’s no turning back." That something is a mutual love and respect, and that may be worth holding on to.

11. You Think That Spark Can Be Relit

When there's a lot of fighting and disagreeing going on, it can really take a toll on the romantic side of things. However, there's often that tiniest bit of chemistry left that means the spark can be relit. "If you have hit a lull, discuss it with your partner and talk about ways that you can infuse some excitement into your relationship," wrote Lehmann, in an interview with licensed counselor Leslie Petruk.

12. You Still Make Each Other Smile

It may sound like such a little thing, but smiling and joking is a good sign. It means there's still something in there worth salvaging. That's because, according to Berliet, those little smiles remind you of your dumb inside jokes. And just like that, you know it's all worth it.

13. You're Both Willing To Work On It

If nothing else, you both need to be on board to fix this thing. If one of both of you has 100 percent checked out, then grieve this fact and move on, suggested Weiss. If not, then start talking, and don't give up.

Because if any of the above is true, then your relationship is probably worth another good, honest try.

More like this
10 Ways To Be More Empathetic To Your Partner
By Raven Ishak and Lexi Inks
21 Signs You're Not In Love Anymore
By Sara Altschule, Kathleen Ferraro and Carolyn Steber
These 4 Zodiac Signs Will Be Extra Lucky In October
By Brittany Beringer
Think Your Partner Is Cheating? These Tarot Cards May Confirm Your Suspicions
By Kristine Fellizar
Get Even More From Bustle — Sign Up For The Newsletter