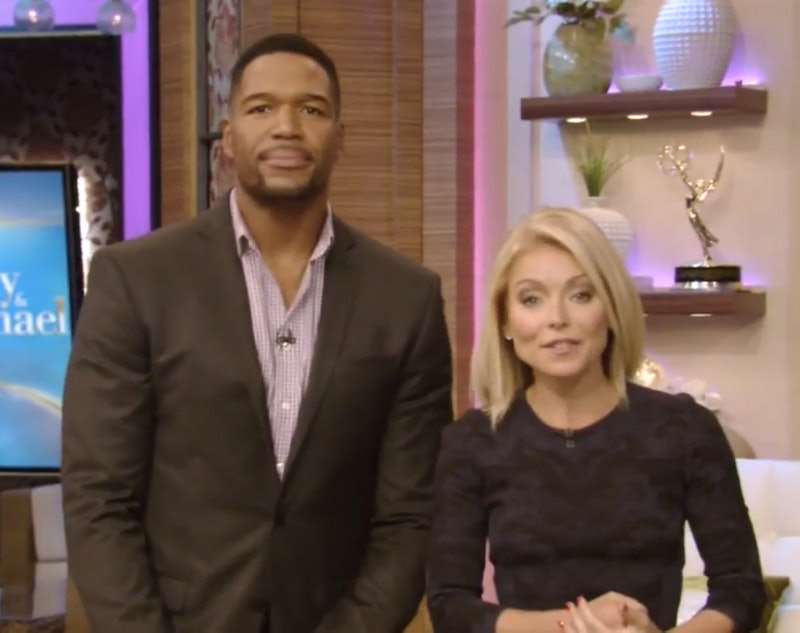 If you're at all aware of the world of morning shows, you probably have some complicated feelings about May 13. I'm betting they were all perfectly reflected in Live with Kelly and Michael 's touching farewell to Michael Strahan. Just to catch you up, in case you aren't aware of what's going on, May 13 was Strahan's final day on the program, after announcing on Apr. 19 that he would be leaving for a full-time position on Good Morning America. Initially, the plan was for him to stay through the summer, leaving in September, but an out-of-the-loop Kelly Ripa reportedly put the kibosh on that, irritated about being kept in the dark about the news, and finding out about Strahan's departure just a half hour before the studio audience did. Woof.

I was interested to see how Live! would handle Strahan's final show, not to mention Ripa herself, but I shouldn't have worried. Taking their cue from the consummate professional that is Kelly Ripa, the show put together a perfect tribute for the former football player, and the only appropriate word for it is "bittersweet." It's easy to forget, in the wake of all the drama of his leaving, but Strahan has had some really great chemistry with Ripa, and some wonderful moments of his own since joining the show in September 2012. They were pretty adorably highlighted in the tribute video that aired near the end of the show.

It's exactly what we need from this kind of tribute, because it reminds us of the good times, and leaves us with a burst of goodwill toward Strahan, who brought great things to Live! during his four year tenure, and will be dearly missed.

I mean, who could replace Strahan? No one could come close to how enthusiastically bad he is at accents, or how jazzed up he gets to make a fool of himself. Also, it's still not clear who producers will choose to occupy this chair next, but I doubt it will be someone who can run through a literal obstacle course with Ripa on his or her back. Dude is no joke.

So we'll cherish the memories of him, just like we hope he cherishes the memories of Live!, whether they were winning an Emmy or interviewing the damn President of the United States. It's been quite the ride, Michael Strahan, and we can't imagine doing it with anyone else.

More like this
What’s New On Netflix: 'Stranger Things' & 'Somebody Feed Phil' Return
By Arya Roshanian
What’s New On Netflix: A Victoria Justice Rom-Com & The Return Of David Letterman
By Arya Roshanian
Jennifer Aniston Joked About Ending 'Friends' With Therapy & Divorce
By Grace Wehniainen
Lisa Kudrow Doesn't Remember Filming 'Friends'
By Sam Ramsden
Get Even More From Bustle — Sign Up For The Newsletter