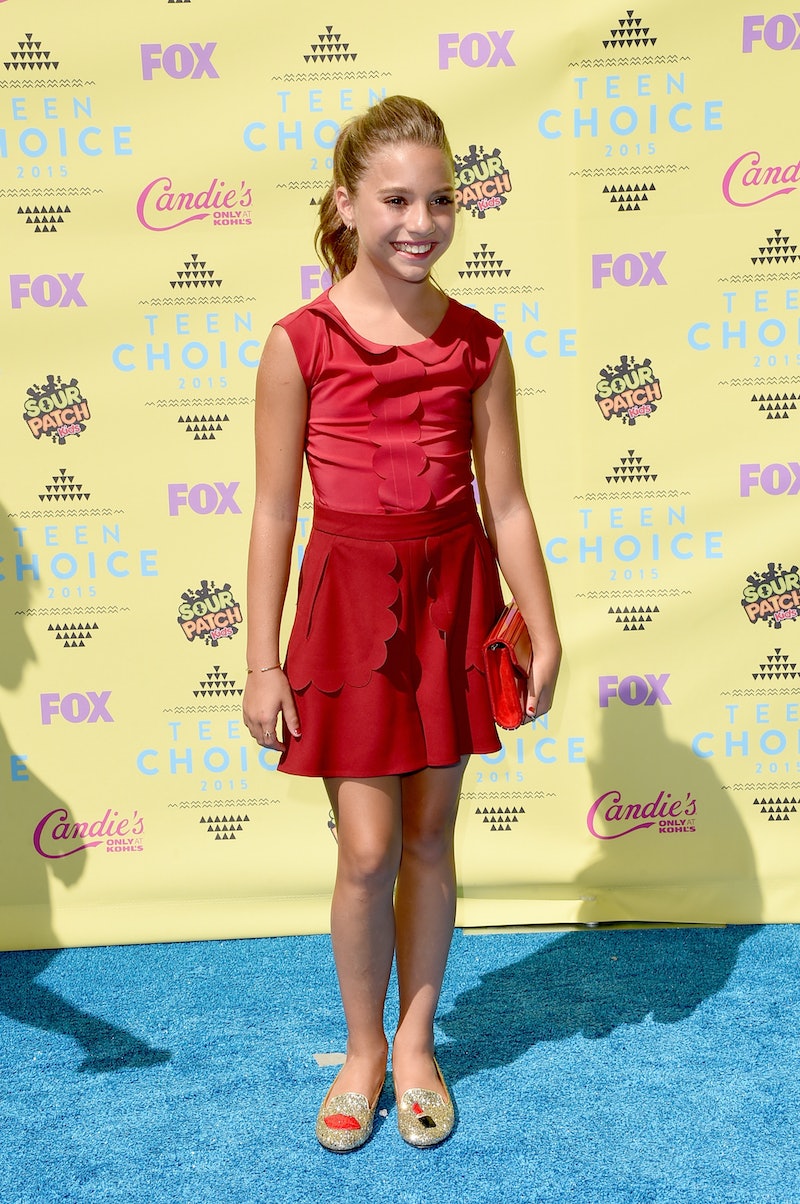 An end of an era occurred on Dance Moms in Season 6 when the Ziegler family decided it was time to leave the Lifetime show. While it has been pretty well-documented what Maddie Ziegler will be doing with her career, less is known about what Mackenzie Ziegler will be doing after Dance Moms. Although she hasn't landed acting roles in major films with major stars like her big sister Maddie has, Mackenzie is sure to still be pursuing her career as an entertainer after leaving the show about the Abby Lee Dance Company — with her mom Melissa Gisoni by her side.

Viewers have watched Mackenzie grow up significantly since Season 1 of Dance Moms and though she will inevitably be compared to her older sister Maddie even now that their time on Dance Moms is over, the 11-year-old dancer has talent all on her own. As the Season 6 Dance Moms reunion host Jai Rodriguez told International Business Times about Mackenzie's star power, "Don't think for a minute that means that Maddie is more talented than Mackenzie because that's actually not the case at all. They're both stars, just in different ways." He continued to back up his statement, saying, "She's got that 'thing' that any producer would love for a headliner."

Mackenzie has been doing projects outside of Dance Moms for years, so here's what fans might be able to expect from Mackenzie's post-Dance Moms life, based on the young dancer's career so far.

Although she has only uploaded four videos to it so far, Mackenzie and her mom have recently relaunched her YouTube channel. And, her Instagram states there will be YouTube videos released on her channel every Wednesday. It appears she will give an inside look at her life, like she did in a video about her bedtime routine. And, let me just say she definitely takes way better care of her skin than I do.

Speaking of her skin care regimen, one of the reasons Mackenzie may be taking extra good care of her complexion is that she has been modeling recently. She walked in a children's fashion show for Polo Ralph Lauren in New York City in August 2015 alongside her sister, but her collaboration with the designer didn't end there. With Pan's Levi Miller, Mackenzie was the face for Polo Ralph Lauren children's spring 2016 collection. She is so adorable and pretty at such a young age that I anticipate her modeling won't end there.

One of the main reasons Mackenzie's big sister left Dance Moms was to focus on her acting career and Mackenzie may follow in Maddie's footsteps now that she'll have more time to devote to doing other TV shows. She already guest starred on the Nickelodeon show Nicky, Ricky, Dicky & Dawn, so she may continue building her acting résumé.

Maddie may star in music videos for Sia, but the singer in the Ziegler family is Mackenzie, whose best known song is "It's A Girl Party." She released a full album as Mack Z in 2014, as well as a Christmas song in 2015, and remixes to her song "I Gotta Dance" in 2016. In the above Instagram post from nine weeks ago, Mackenzie wrote it was her last day in the studio recording her new album, so expect new music from her very soon.

Giving Back With Do Something

Mackenzie and her sister have teamed up with Do Something, a non-profit organization that encourages young people to get involved in social activism, especially through social media. The Ziegler's cause on DoSomething.org is "Birthday Mail," which asks that you send homemade birthday cards to youth who are homeless. It's great to see that Mackenzie and her sister are using their fame to do good.

Dancing Her Heart Out

Abby Lee Miller often gave Mackenzie acro solos (sometimes to the annoyance of Mackenzie), but she has shown on Dance Moms that she has a wide range of dance talent. This was highlighted when she fought for her right to do a hip-hop routine as one of her last solos on the series. Just like with her big sister Maddie, I hope Mackenzie doesn't give up the talent that made her famous anytime soon.

More like this
How 2 'American Idol' Singers Performed With COVID-19 & Made It Into The Top 5
By Jake Viswanath
G Flip Shared How They Got Romantic With Chrishell Stause & Discussed Babies
By Brad Witter
Bling Empire Isn’t Dorothy Wang’s First Reality TV Gig
By Brad Witter
Will ‘Bling Empire’ Return For Season 3? Here’s What To Know So Far
By Kadin Burnett
Get Even More From Bustle — Sign Up For The Newsletter