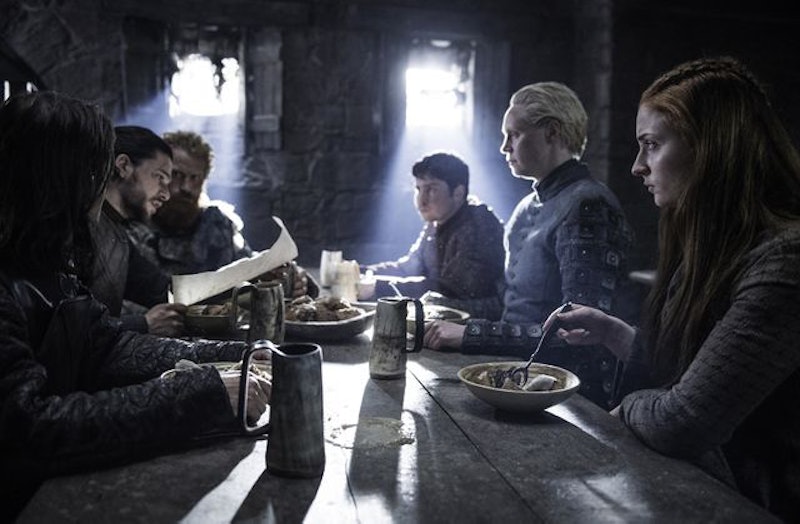 Despite its ominous title, this Sunday's episode of Game Of Thrones was one of its most triumphant to date. "The Book Of The Stranger" may have sounded like it was going to be all about death, but with one glaring exception (RIP, Osha), this hour was actually very much about unexpected reunions between the living. For the first time since Season 1, two Stark siblings reunited; Theon reunited with his sister, Yara; Littlefinger reunited with Robin; Dany reunited with her own badass self. But, leave it to Ramsay to muck it all up, not just by murdering Rickon's protector, but by sending Jon Snow a graphic and threatening letter. And, Ramsay's Game of Thrones letter was one of the most important parts of Season 6 Episode 4.

In case you don't remember every detail of Ramsay's missive, here it is in its entirety:

To the traitor bastard Jon Snow,

Ramsay Bolton, Lord of Winterfell and Warden of the North

With a couple of exceptions, Season 6 has moved beyond George R.R. Martin's source material for the majority of its plots. That's why it's all the more shocking to see this letter suddenly dropped into Jon Snow's storyline at such an unexpected moment. Book readers will remember it very well: It's often referred to as the Pink Letter, after the color of the Bolton sigil, and in keeping with fans' tendency to name events after colors (Red Wedding, Purple Wedding, etc.). Here's how the Pink Letter reads in A Dance With Dragons:

Your false king is dead, bastard. He and all his host were smashed in seven days of battle. I have his magic sword. Tell his red whore.

Your false king's friends are dead. Their heads upon the walls of Winterfell. Come and see them, bastard. Your false king lied, and so did you. You told the world you burned the King-Beyond-the-Wall. Instead you sent him to Winterfell to steal my bride from me.

I will have my bride back. If you want Mance Rayder back, come and get him. I have him in a cage for all the north to see, proof of your lies. The cage is cold, but I have made him a warm cloak from the skins of the six whores who came with him to Winterfell.

I want my bride back. I want the false king's queen. I want his daughter and his red witch. I want his wildling princess. I want his little prince, the wildling babe. And I want my Reek. Send them to be, bastard, and I will not trouble you or your black crows. Keep them from me, and I will cut out your bastard's heart and eat it.

Obviously there are a lot of differences between these two versions of the Pink Letter, both in content and in context. In the book, Ramsay is writing to inform Jon of Stannis' defeat in battle and to inform him that he's holding Mance Rayder captive. (Yes, the King-Beyond-the-Wall is still alive in the books.) On the show, Jon already knows of Stannis' defeat, and Ramsay is writing to inform him that he's holding Rickon Stark captive. Also, the bride that book-Ramsay is referring to is Arya, not Sansa. (And in turn, that "Arya" is actually Sansa's childhood friend Jeyne Poole being passed off as the younger Stark sister in order to solidify Ramsay's hold on the North — but Jon doesn't know that.)

In the book, the letter actually arrives before Jon's death; in fact, it directly precipitates that traumatic event. It's because of the Pink Letter that Jon decides to rally the Night's Watch and march south against Ramsay and Winterfell, in order to protect the young woman he believes is his beloved sister. This is a direct violation of Jon's oath to take no part in the wars and politics of the Seven Kingdoms — and it's the (much more legitimate) reason why his brothers declare him a traitor and mutiny against him. On the show, the letter has arrived after his resurrection, putting Jon in a position to wage war on Ramsay and save Rickon without betraying his oath; his death has already released him from the vow he took for the Night's Watch.

But, the show's version of the letter is troubling for all the ways in which it's similar to the version from the books. Both versions take great care to refer to Jon as "bastard" as often as possible, as though Ramsay is reveling in his own newly-legitimized status. They both contain the demanding sentence, "I want my bride back." And they both contain nasty threats of what will happen if Jon doesn't comply. So, what do these similarities mean? For starters, they're probably bad news for book readers.

When Ramsay sends the letter in A Dance With Dragons, book readers haven't actually seen the events he describes play out; we haven't seen Stannis defeated or Mance captured through any perspective other than Ramsay's note. Stannis fans have held out hope that this means the character is actually still alive, and Ramsay is just bluffing in order to get a rise out of Jon. On the show, Jon reacts with similar skepticism, wondering if Ramsay is bluffing about Rickon. Sansa's insistence that he's telling the truth feels like the show's sly way of telling readers that book-Ramsay's claims about Stannis were equally true. This would mean that the show's decision to kill off Stannis in the Season 5 finale wasn't actually a drastic departure from Martin's plans for the Baratheon king; it was simply accelerating them a bit.

But, even more important than what the letter means for book readers is what it means for the show. The writers' decision to employ this plot device at this moment speaks volumes about their intentions moving forward. We may be largely in uncharted territory now, but that doesn't mean the writers aren't allowed to pick and choose from Martin's source material for their adaptation. The writers will likely continue to subvert our expectations by taking key plot points from the books and shifting them around within their own narrative. (Think of the way NBC's Hannibal took Thomas Harris' novels and basically stuck them in a blender for a result that was simultaneously incredibly faithful and wildly original.)

This revelation should happily keep audiences on their toes; any aspect that readers may have thought was cut from the show may still appear at any time. Yes, the Kingsmoot is still happening; yes, Jaime will finally head for the Riverlands. These storylines weren't cut, they were merely repositioned for maximum effectiveness. So what other cut Game Of Thrones storylines might still pop up unexpectedly?

I can think of at least one that many fans would love to see, and it rhymes with Shlady Shtoneheart…