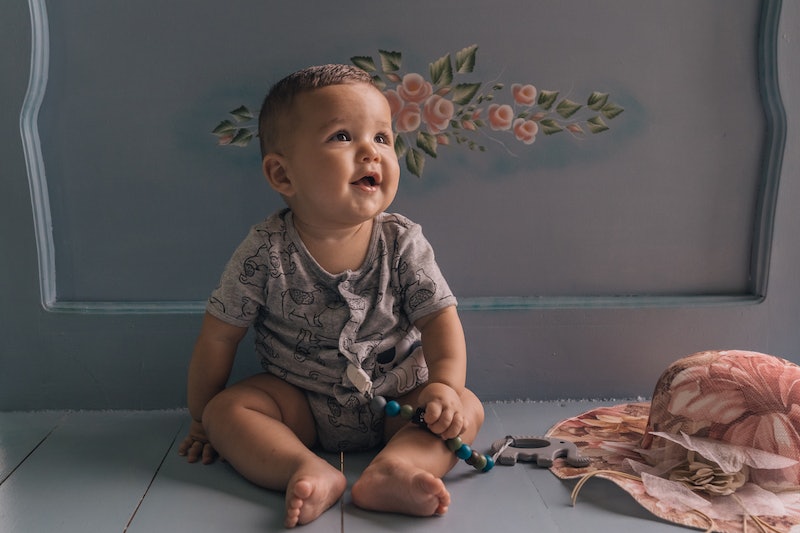 Whether we like it or not, it’s usually pretty simple to date a name — for example, anyone who meets a 20-something “Isabella” or “Bella” around the year 2030 is probably going to be able to do the math on when the aforementioned person was born with relative ease. (Twilight was first published in 2005, so... yeah.) But if you choose to buck the trends a little — say, go with some vintage baby names from the 1960s — then you’ll probably make it just a tiny bit harder for folks to figure out exactly when your offspring entered the world. Whether that’s a good thing or a bad thing is up to you; personally, I kind of love the idea of giving today’s kids slightly old fashioned names, so I’m totally down for bringing back a few monikers that might have fallen out of style.

The Social Security Administration does this wonderful thing where they make their data on the most popular baby names of each year and decade from 1900 on up accessible via the internet, and you guys? It is so very easy to waste all your time there, looking up the 200 most popular names of 1929 or whatever. You can even see where your name ranks for the year you were born, if that’s your thing. (Mine was… not very popular the year I was born, but it’s been growing ever so slightly recently.)

The best way to get a sense of baby name trends over time, though, is to take a look at the rankings by decade. That’s where I pulled this list of 1960s names from; many of them were on the upper ends of things between the years of 1960 and 1969, although a few were on the lower end. Either way, though, we don’t often meet people with these names today, so maybe it’s time to think about putting a few of them back into circulation. There’s nothing like a little rediscovery to boost your creativity, right?

Although it’s often used as a nickname for “Constance,” “Connie” on its own was pretty popular during the ‘60s, too, with 65,281 girls bearing the name. It means “steadfast.”

OK, yes, “Randall” always makes me think of Randall Graves, who is perhaps not the best person on which to model a child. I still kind of dig the name, though, and so did a lot of parents in the ‘60s — 52,066 Randalls were born during the decade. A variant of “Randolph,” it means “shield wolf,” which is all kinds of badass. If you want to update it a little, you might try “Ransom.”

Fun fact: Although “Pamela” is considered a mainstream name these days, it’s actually an invented one — 16th century poet Sir Philip Sidney created it for his epic The Countess of Pembroke’s Arcadia . (So basically, it’s the 16th century version of “Alivia” and “Samanda.”) During the 1960s, 181,948 parents named their offspring “Pamela,” making it the 14th most popular girl’s name of the decade. It’s thought to be derived from the Greek words “pan,” or “all,” and “meli,” or “honey.”

Although the 1960s saw a surge of popularity for “Robin” as a girl’s name — 118,322 girls bore the name in the ‘60s, making it the 34th most popular moniker — it’s also a terrific gender neutral option. In addition to being the name of a bird, it also means “bright with fame.”

I knew a bunch of Todds when I was a kid, but it’s not a name you see much anymore these days. In the 1960s, though, 128,770 boys named Todd came into the world in the United States — and honestly, I think this one would make a pretty great gender neutral pick, too. For the curious, it means “fox.”

The 114,291 Dawns that were born in the United States in the 1960s must all have bright and sunny dispositions, no? It means exactly what it says it does — that is, it’s the moment when daylight first spreads out across the land — but hey, you could also go for Aurora, which means the same thing.

“Raymond” — which comes with the fabulous nickname “Ray” built right into it — means “wise protector.” 81,816 Raymonds were born in the ‘60s, while an additional 22,189 babies were named simply Ray. Maybe it’s time to bring it back, y’all.

To be fair, “Troy” wasn’t super high up on the list in terms of popularity; at 61,423 Troys born, it was only the 55th most popular name for boys during this particular decade. It might be ripe for a resurgence, though, so why not give it a shot? In addition to being the name of the place famous for playing host to the woman with the face that launched 1,000 ships, it’s an Irish name meaning “descendent of foot soldier” and a Norse name meaning “growing.”

I haven’t encountered many Sheilas in my lifetime; however, I know there are at least 74,000 of them wandering around, and they were all born in the ‘60s. The name is actually an Irish variant of “Cecilia,” and it means “blind.” (Possibly an odd name meaning to consider, but hey, if you like the way it sounds, go for it.)

Or Tracey, if you prefer — the ‘60s saw the birth of 103,778 girls and 29.173 boys named Tracy, as well as 40,293 girls named Tracey. Hoorah for gender neutral names! It can mean either “from the end of town” or “of Thrace” (Thrace being a city from antiquity located on the borders of modern day Greece, Bulgaria, and Turkey.) Oh, and hey, "Tracie" is an option, too.

Not going to lie: I’m definitely including this one because of The Walking Dead. 48,097 babies were dubbed Glenn during this decade, although I doubt that all of them were “from the valley” (which is what the name means). It might also be spelled with one "n"; indeed, an additional 21,892 baby boy Glens were born in the 1960s. Like a lot of names on this list, though, it’s gender neutral, so feel free to give it to a non-boy baby, too.

Aaaaand another Walking Dead -inspired moniker that also made the rounds many decades prior to The Walking Dead. “Daryl” is actually a variant of “Darrell,” which means “dear one” or “beloved”; it can also be spelled “Daryll,” and is a terrific gender neutral name to boot. (Hi there, Daryl Hannah!) Like “Glenn,” “Daryl” wasn’t super popular in the ‘60s — there were 15,260 boys with the name born during the decade and no girls — but it’s worth a shot anyway, right?

I don’t actually think I’ve ever met any Hollys, but I love the name — and so did the parents of 32,145 baby girls given the name during the years of 1960 and 1969. You could also go for “Hollyn,” a variation on “Holly” that means the same thing (that is, the name of a certain kind of tree), if you want to update it a little.

Used on its own or as a shortened version of another name (“Josephine,” “Joanna,” “Joanne,” “Jodi”…), "Jo" is a fantastic gender neutral name; only 20,199 baby girls were given the name in the ‘60s, but there are 15 other names of both genders that were popular during the decade that begin with “Jo-,” so I’m going to consider that a big win. The meaning varies depending on which full length name you’ve derived it from, but most of the “Jo-” names are Biblical, so I’m going to assume it means something akin to “God.”

More like this
11 Trends From The ‘90s That Made You Feel So Cool
By Julie Sprankles
Remember These Ancient Pieces Of '90s Tech?
By Lucia Peters and Emma Carey
Starbucks’ Chocolate Cream Cold Brew Tastes Like This Retro Candy
By Emma Garza
8 Creepy Things You Probably Did In The '90s
By Julie Sprankles
Get Even More From Bustle — Sign Up For The Newsletter