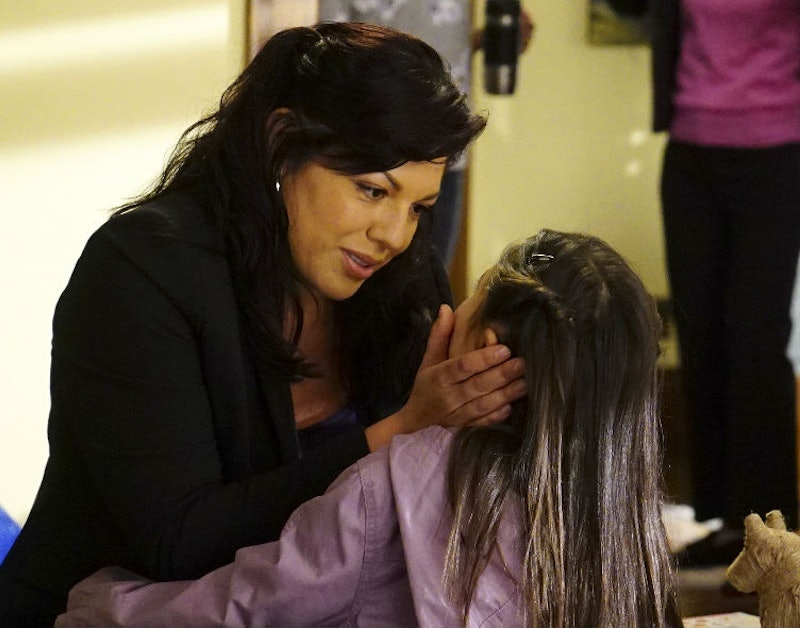 Now that Grey's Anatomy Season 12 is officially over, it's time to start thinking about Season 13, especially since Sara Ramirez exited as Callie Torres during Thursday's season finale. What's going to happen now that Callie is off in New York with Penny? What does this mean for Arizona? What does this mean for her orthopedic surgeon slot she left at Grey Sloan Memorial Hospital? There are a lot of unanswered questions, including, who could fill Callie's role on Grey's Anatomy? Well, the latter is a tricky question, but one with several possibilities.

First, let me say that there's always the chance that Grey's might not even try to fill Callie's role. I mean, she can't really be replaced, now can she? I'm sure creator Shonda Rhimes would have no intention of ever trying to replace Callie, because she's irreplaceable. Plus, it sounds like Ramirez might not be done with her character for good. As she said in a statement about her exit, "I’m deeply grateful to have spent the last 10 years with my family at Grey’s Anatomy and ABC, but for now I’m taking some welcome time off." Notice she said "some," which seems like it could be hinting at a non-permanent leave. I can only imagine that having an orthopedic surgeon would be handy at the hospital, but it might not be a position Rhimes is looking to fill right now. Though, I'd be surprised if it doesn't happen at some point in time.

Let's say it does. As fans know, Grey's is no stranger to bringing on new doctors, so there is a good chance that a new face will come on in Season 13 to be the new head orthopedic surgeon. If a new surgeon does join the series, it might not necessarily be in a regular capacity, but maybe as a guest star or in a recurring role. There's no doubt that if someone does come on, they have huge shoes to fill.

If no one new comes to Grey Sloan, then does that mean someone who is already a staff member will fill the position? Obviously, several of the characters are still working their way up the ladder to becoming attending physicians and heads of departments. But let's put that all aside and figure out the most likely candidates. In the past, Jo has show interest in orthopedics. Plus, she has a knack for it, so she just might be the best fit. If not Jo, then both DeLuca and Ben could be possibilities. Now that Giacomo Gianniotti is a series regular, Season 13 might hold a lot more career-wise for DeLuca. He could easily find his way into orthopedics.

As for Ben, there's no doubt his passion for surgery is, well, sometimes intense. I mean, he even got suspended after doing a procedure during a lockdown resulting in both the death of a mother and her baby. Now that he is making his way from anesthesiology to surgery, he could always become interested in ortho, but who knows. Really, anything can happen in the world of Grey's that just might push characters in all kinds of directions regarding their professions.

Now, for those Arizona fans who are worried that without Callie she might not find someone, I highly doubt Rhimes won't bring on another love interest for Arizona. Obviously, she doesn't need one to be happy or to be successful in life, but this is Grey's, right? Romance and relationships are a huge part of the series. So, now that Callie is in New York with Penny, I have a feeling someone either new will be cast or a familiar face could find love with Arizona. Who might that be? We'll have to wait and see.

Overall, there's a lot that can happen now that Callie is gone. Based on her departure, it seems that Season 13 will be just as dramatic as every season that came before.