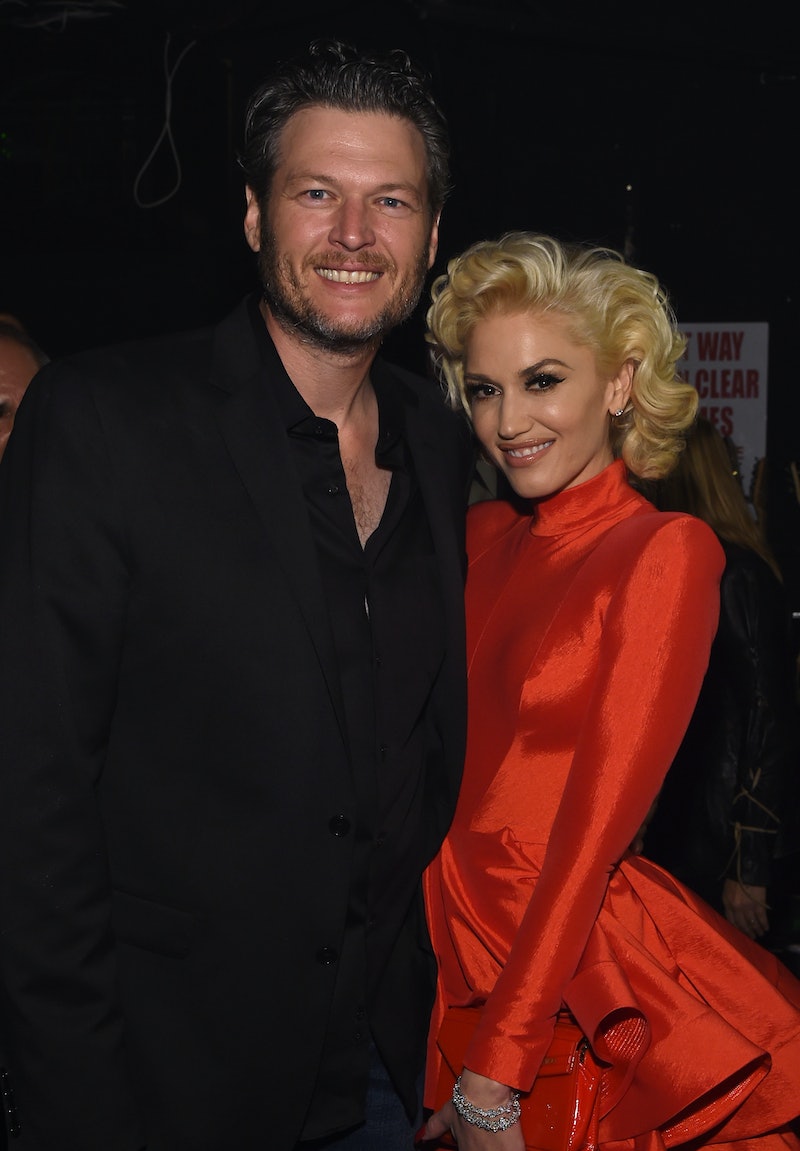 Remember when there were just rumors circulating that The Voice stars Gwen Stefani and Blake Shelton might be dating? Speculation went on for awhile before they officially declared themselves an item, but now the singers are living an open and happy life as a couple. But let's back it up a bit, especially for those who want to know the ins and outs of the celeb duo. If you've been wondering when Blake Shelton and Gwen Stefani started dating, I'm here to give you the answer.

In November 2015, it was officially confirmed that Shelton and Stefani were a couple. A rep for the former No Doubt singer told Us Weekly, "Gwen and Blake are longtime friends who have very recently started dating." And before there was an official comment, so many rumors were going around that they were indeed seeing each other.

In early October 2015, a source close to Shelton told People, "There's nothing there. They're nothing more than friends." Then, over Halloween in 2015, E! News obtained photos of the two singers at Adam Levine's Halloween party being super cozy and flirty, which were proof enough for some fans. But if you were really holding out for the official statement, you got exactly that in November thanks to Stefani's spokesperson.

And really, the rest is history. Though, I can't help but wonder how long they'd been seeing each other prior to coming out as couple. Shelton and Miranda Lambert announced their divorce in July 2015 and Stefani and Gavin Rossdale split in August 2015, so both members of this pair really didn't wait too long before moving on to a new relationship.

If you think about it, the two really haven't been together that long. If you count November as when they "officially" started dating, Stefani and Shelton have been dating for about six months. Don't get me wrong, half a year is a long time, but it just feels like they've been together forever thanks to all of the rumors and reports. When celebrities repeatedly make headlines as a couple and the talk about if they truly are together go on and on, sometimes it seems like they have been seeing one another for a lot longer than they have been. That's just romance in Hollywood for you.

One thing does remain certain and that is they are blissfully happy together. They even have a duet titled "Go Ahead and Break My Heart" together. As for Shelton, he's loving every minute of their time together. He told Today in May, "It's a little weird. We could not be, on paper, any more different. I mean, I'm a country singer and she's a ska, rock, pop, whatever it is... and it's just an odd idea. But man, it's a lot of fun. I've gotta be honest about that."

It's clear Stefani feels the same way. During an appearance on The Ellen DeGeneres Show in November 2015, she revealed, "I do get to have a second chance, and I feel really, like, I have a lot of joy right now, I really do."

I have a feeling the length of time they've been dating doesn't matter to them, because they are having the time of their lives.