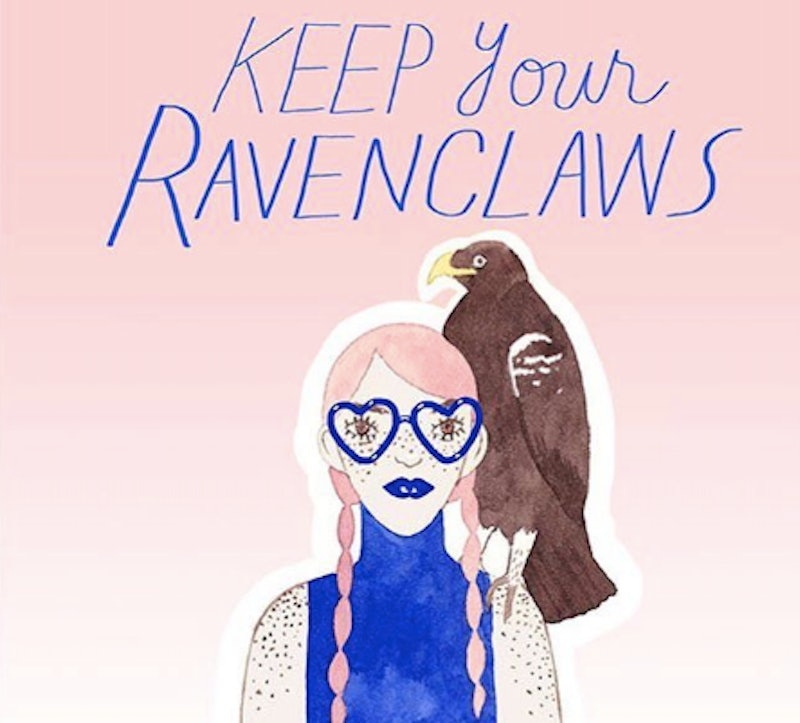 Nerdy feminists of the world, rejoice: artist Louise Reimer teamed up with SparkNotes to make feminist posters for the Hogwarts Houses, and they are every bit as kickass as you could imagine. It seems a fitting way to celebrate the series, seeing as J.K. Rowling gave the Harry Potter generation some of the most kickass feminist icons of all time. Whether you wanted to be as driven as Hermione, as fierce as Ginny, as fearless and dedicated as Molly Weasley, or as independent as Luna, we all had a strong female character we could identify with and aspire to emulate.

And yeah, there were a few decidedly un-feminist moments in Harry Potter — the Team Bitter About Movie Ginny flag still flies pretty damn high — but from seeing true-to-life instances of the patriarchy getting our favorite witches down, we all became more determined feminists in the Muggle world for it. And what better way to celebrate than by giving the Hogwarts mascots a feminist makeover? Reimer's interpretations of the new posters all feature strong, fearless ladies owning themselves. I haven't been this excited since Molly Weasley's infamous, "NOT MY DAUGHTER, YOU B*TCH."

As a Hufflepuff myself, I am 800 percent on board with this. As the house known best for its hardworking and loyal nature, the Rosie the Riveter parallel could not be more appropriate. You got a problem? Hufflepuff ladies will get 'er done. Somewhere Tonks is fist-bumping Cedric on the big ole Hufflepuff cloud in the sky.

#PREACH, RAVENCLAWS. Wrecking the patriarchy just as effectively as they wrecked the grading curve.

If you're a Gryffindor or a Slytherin, no worries — SparkNotes has you covered. Head over to their article to see the full effect of the four feminist Hogwarts House posters next to each other, and fully realize your new #HouseGoals. And in the meantime, ladies, keep on slaying the basilisks.