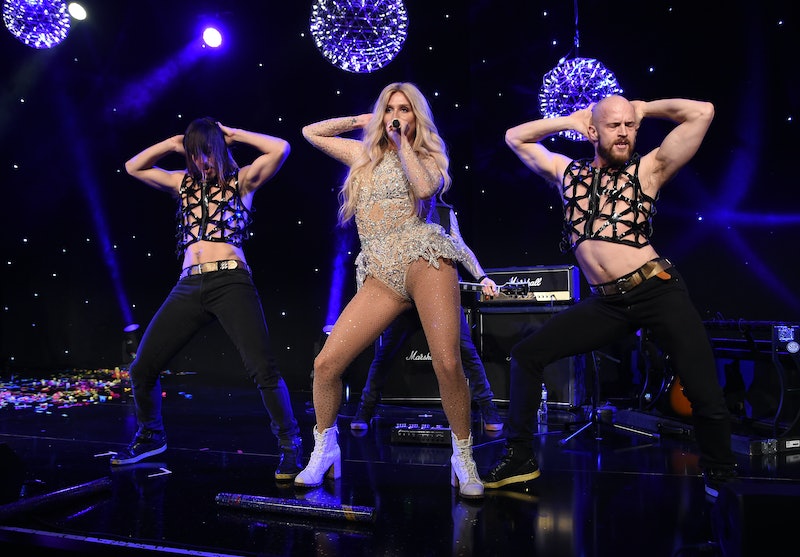 The road to the Billboard Music Awards has been a rough one for Kesha, whose life and career has been marked by major upheaval in the last two years. When rumors began to fly that Kesha was performing at the Billboard Music Awards, it was also part of the speculation that Kesha would be using the performance as a statement to Dr. Luke that would reference their legal battle of 2014-2016. The news broke that Kesha was being barred from performing, a story that Kesha confirmed on her Instagram on Wednesday, May 18. She wrote, "I'm very sad and sorry to say I won't be allowed to do this. I just wanted to make very clear that this performance was about me honoring one of my favorite songwriters of all time and has never had anything at all to do with Dr. Luke. I was never going to use a picture of him, speak of him or allude to my legal situation in any way." Since then, Kesha has been granted permission to perform at the Billboard Awards by Kemosabe Records, but considering all of this drama, many might be wondering if her producer and head of Kemosabe, Dr. Luke, is watching the Billboard Music Awards.

"Kesha's performance on the Billboard Music Awards was always approved, in good faith. Approval was only suspended when Kemosabe learned Kesha was to use the performance as a platform to discuss the litigation. Now that Kemosabe has obtained assurances, that is relying upon, from Kesha, her representatives and Dick Clark Productions that neither Kesha nor her supporters will use the performance as such a platform, the approval has been restored."

In October 2014, Kesha sued Dr. Luke for sexual assault, hoping to be allowed by a court of law to record her music without him in what her lawyer described as a "wholehearted effort by Kesha to regain control of her music career and her personal freedom after suffering for 10 years as a victim of mental manipulation, emotional abuse and sexual assault at the hands of Dr. Luke." Dr. Luke (real name: Lucasz Gottwald) countersued Kesha for extortion that same month, denying her claims in a April 2016 statement to Rolling Stone via his lawyer which read, "The Court repeatedly stated Kesha is already free to record without Dr. Luke, and that she had not presented any facts supporting her claims. That's because all the evidence — including Kesha's own videotaped sworn testimony — show her allegations are false." In February 2016, New York Supreme Court Justice Shirley Kornreich ruled that Kesha had to uphold her contract with Dr. Luke.

In light of all of that, it's quite likely that Dr. Luke will be watching the Billboard Music Awards, if not because of the drama, then at least to support an artist on his label. The constant back and forth between Kesha and Kemosabe Records, as well as the controversy of the legal battle, has led to fans raising money to buy Kesha out of her recording contract, protesting at the Sony Offices, and even trending #FreeKesha on Twitter while celebrities like Demi Lovato, Lady Gaga, and Zedd have spoken out in support of Kesha. Gaga even tweeted, in response to the Billboard Awards controversy:

So Dr. Luke potentially watching Kesha's performance seems rather likely. But, even if he doesn't watch, Kesha is going to rock the hell out of the performance by doing what she does best and what she loves most: singing.