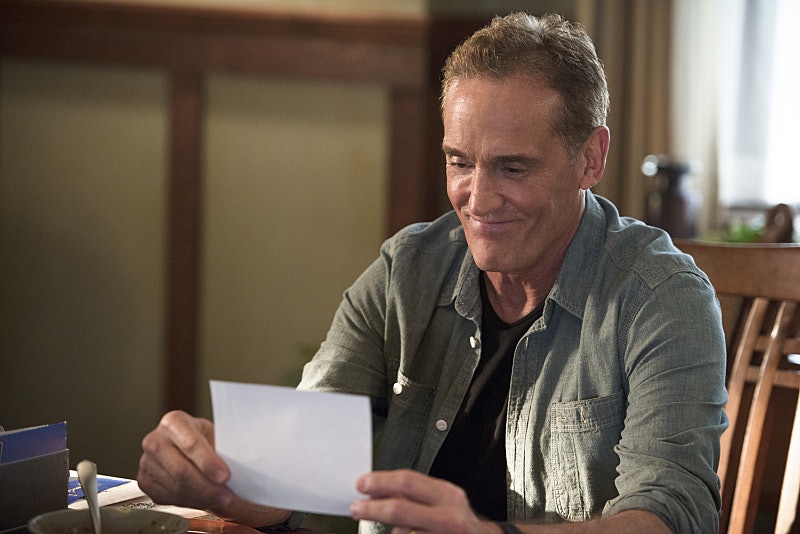 Between The CW's three DC Comics series this season, there have been too many major character deaths — but there have also been quite a few resurrections. The most recent death on The Flash came at the hands of this season's seriously evil villain, Zoom, who killed Barry's father Henry in front of the hero in an effort to recreate their shared childhood trauma of having a parent murdered. But, this is a comic book universe where resurrection is possible, so is there any chance Barry's dad could come back on The Flash ?

Well, let's take a second to go over how characters within The CW's DC TV universe have come back in the past. First, there's the Lazarus Pit that resurrected both Thea and Sara on Arrow, but that was destroyed after its last use. Then there was the case with Ray Palmer, which wasn't really a resurrection so much as Team Arrow figured out he wasn't dead, he was just very small. Plus, The Flash used time travel earlier in Season 2 to bring a character back; Barry traveled back in time a year to when Eddie was still alive — cue my heartbroken sobbing because Eddie was too good for this world. Time travel is also a favorite of Legends of Tomorrow, since that whole series is based around the concept of jumping around in the timeline.

Still, the most plausible (relatively speaking, of course) way of bringing a character back on The Flash is by means of the multiverse — that's how the show managed to bring Harrison Wells back for Season 2, after all. Plus, Laurel Lance recently showed up on The Flash after her character's death on Arrow because her Earth-2 doppelgänger was one of Zoom's minions. So, since we haven't met the Earth-2 version of Henry Allen yet, there's a possibility Barry could be reunited with his father in that way — although that may be more tragic than heartwarming if I'm being honest.

As for the other means of resurrection, it doesn't seem as though Barry's Earth-1 father will return anytime soon. The extended trailer for "The Race of His Life," the next episode of The Flash following Henry's death, features Barry attending his funeral, which is generally a sign on any television series that the character is gone for good. Plus, it seems Zoom killing Henry may be the event that gives Barry the motivation to finally defeat the villainous speedster once and for all.

So, while there are plenty of means by which The Flash could bring Henry Allen back after his death at the hands of Zoom, it seems unlikely the show will do any of that — at least in the Season 2 finale. That is, unless Earth-2 Henry Allen is the man in the iron mask being held in Zoom's lair! Out of all the ways these DC Comics television series have brought characters back, an alternate universe version of Henry seems to be the most likely way he would return to The Flash, but we'll have to wait and see if that happens.