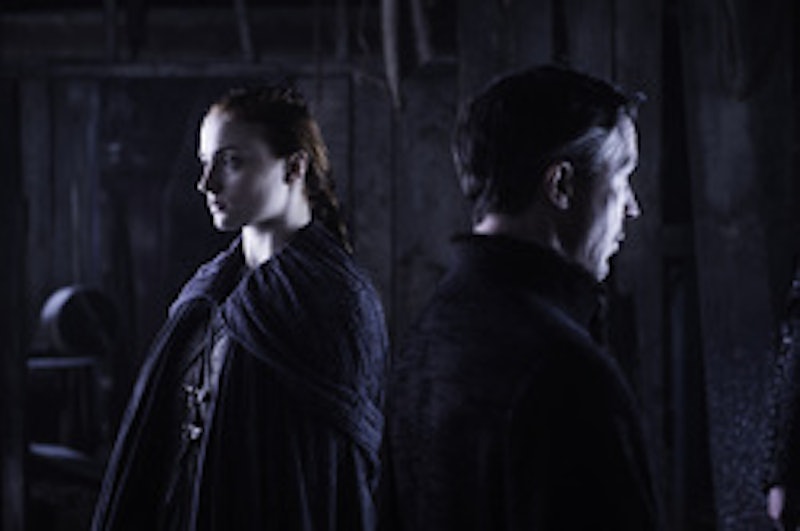 One of the most triumphant moments of Game of Thrones Season 6 came when Sansa Stark delivered an amazing monologue to Lord Petyr Baelish about her brutalization at the hands of Ramsay Bolton. It's still not enough for either Sansa or the audience to forgive or even trust Littlefinger again, but that doesn't mean you should count him out, even though he slunk away from that meeting. What is Littlefinger planning on Game of Thrones? He's never done anything on this show without a good reason, but going North to meet with Sansa — who is understandably completely done with him — seemed a curious choice, almost as curious as betraying her in the first place. That is, until you remember Baelish's two guiding principles: His sigil, "Knowledge is power," and his most significant piece of dialogue, "Chaos is a ladder."

Right now, Littlefinger has control of several key areas of Westeros. Earlier this season, he was at the Vale, manipulating his young stepson Lord Robin Arryn into using the Knight of the Vale to "rescue" Sansa from Ramsay. His work in King's Landing also earned him the title of Lord of the Riverlands (and haunted castle Harrenhaal), the home of Catelyn Stark's family, the Tullys. Whether or not they'll follow him, or support him if he tries to consolidate or expand his holdings is a different story, but if there was some kind of altercation in the south — like, say, a war between the Faith Militant and the Tyrell army? — Littlefinger is poised to benefit by potentially taking advantage of the chaos.

Sansa, meanwhile, represents "the key" to the North. As the trueborn daughter of Ned Stark, she should have the best claim to Winterfell, given that nobody knows that Bran and Rickon are still alive... except for Ramsay, who has Rickon, and everyone who received his letter at Castle Black. So Littlefinger made a point of calling Jon Sansa's "half" brother in order to drive a wedge between Sansa and Jon. Instead of finding a way to legitimize Jon, Sansa would become the heir of Winterfell.

And with a marriage to Robin Arryn, the way Littlefinger schemed back in Season 4 (or, perhaps, Baelish himself), that would unify his holdings of everything from The Wall to The Riverlands. And with a wildling army, the supposed Tully army (or whatever other Riverlands forces he can muster), the Northern houses, and the Knights of the Vale working together, that's enough to muster forces to either storm King's Landing, or simply declare independence from the Westerosi kingdom. So... yes. Littlefinger may have suffered a momentary low, but this meeting with Sansa could be huge. And it will be totally up to Sansa whether to play into his plans, or take the North exclusively for the Starks. She certainly seems very understandably resistant to an alliance at the moment.

Several questions still apply. Littlefinger wouldn't need to beg for Sansa's forgiveness if he had just kept her safe in the first place (or come up with a better ruse for the trade). It's unclear if Blackfish has actually amassed an army, and if not, what is going on in the Riverlands right now. In the A Song of Ice and Fire series, things are quite different — Lady Stoneheart, Catelyn Stark risen from the dead, is traveling the area seeking revenge for the Red Wedding by killing all of the Freys she can find.

And even if Littlefinger is able to form an alliance between the North, the Reach, and the Riverlands, what exactly will he do next? It's undeniable that this crafty character will have a big impact on Game of Thrones Season 6, but his motives still remain cloudy.