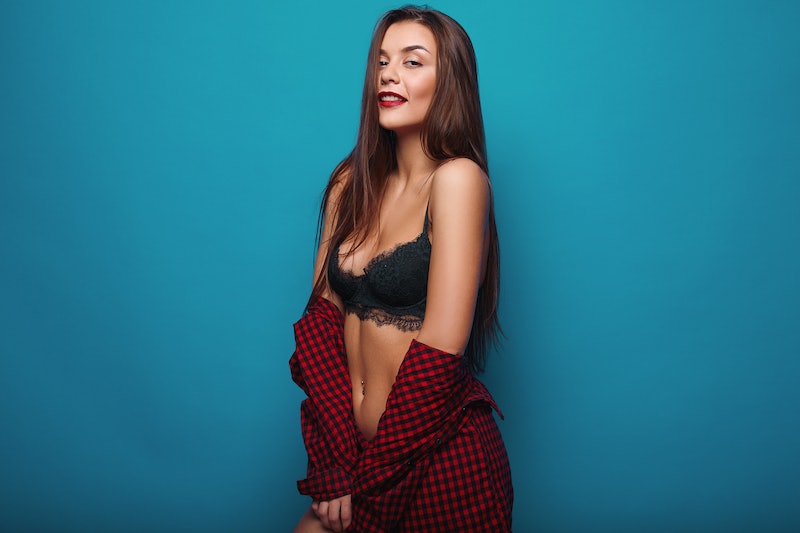 Bras are not my favorite thing to wear. In fact, I publicly swore off bras last year and have only worn one a few times ever since, at special occasions that required a more modest cover-up of my nipples. Of course, all boobs are different, so I know it's not an easy feat for everyone to simply chuck out their bras on a whim. However, there is some recently released scientific evidence proving that there are some major benefits to going braless every now and again. In fact, some researchers are actually claiming that bras may be doing the complete opposite of what we expect them to do — and that bras are causing our breasts to sag.

In 2013, a study was conducted in France of 330 different women between the ages 18-35. Over the course of 15 years, these very willing volunteers and their bodies were studied closely to see how bra-wearing over time affected them. It was concluded that "medically, physiologically, and anatomically" there was nothing to be gained from putting on a bra every morning. In fact, there might be some negative consequences to bra-wearing that initially sound totally counterintuitive. For example, the elasticity of your breasts may wear out because of bras, causing your breasts to fall south earlier than expected.

While breast sagging is a perfectly normal result of things like aging and breast feeding, there may be certain ways that bras themselves are speeding up the process. Here are seven ways bras may cause sagging — though, it's important to note, sagging itself is nothing to be ashamed of.

1. They Could Compromise Your Breast Tissue

Sport science researcher Jean-Denis Rouillon, a professor at the University of Franche-Comte who led the French study of 330 women, said, "Breasts gain no benefit from being denied gravity" — and that there's evidence to prove it. In the study, the women who handed in their bras actually saw a 0.3 inch lift in their nipples compared to those who were still bra-ing it up every day. Professor Rouillon believes this is because wearing bras religiously may damage the delicate tissue in your breasts, causing your boobs to lose tone and plumpness. "Supporting tissues will not grow and even they will wither and the breast will gradually degrade," he told the New York Times.

2. They May Cut Off Your Circulation

Researchers working on the 2013 French study also have reason to believe that wearing bras for an extended period of time could cut off the circulation around your ribcage and midsection. This isn't something that would happen overnight, like if you accidentally fell asleep in your push-up bra, but it certainly is a possibility if you've been a faithful bra-wearer for many years. This unhealthy tightening around your breast area could negatively affect other factors in that region that contribute to perky boobs, such as the strength of your muscles, which we'll get into below.

3. They Weaken The Muscles Around Your Boobs

There are these things called "suspension muscles" in your breasts, and they're apparently crucial in preventing saggy boobs. They work along with these connective tissue structures called Cooper's ligaments, and their collective job is to suspend the meaty part of your boobs on the chest wall. Rouillon says the quality of these muscles will deteriorate over time if you wear a bra too often, resulting in sagging. They're like every other muscle in the body — if the muscles don't have the chance to work, they lose their tone and eventually become weak.

4. They're Often The Incorrect Size

In this particular study, we weren't given any information about whether these women were wearing the correct bra size, which makes it hard to tell how much of the problem was due to incorrect bra sizing. However, considering how many women in the world are donning bras that don't fit, it's a factor worth looking into. The Swiss lingerie company Triumph did an international survey of 10,000 women and found that 64 percent of them were wearing the wrong bra size for their body. Ouch.

Every time you strap on a bra that's not the correct fit, you run the risk of numerous unpleasant consequences, including headache, back pain, and sagging breasts. Bras are (supposedly) meant to provide support for your boobs, but if you're wearing one that's too tight around the rib cage, you damage breast tissue and tone. We'll never know for sure, but incorrect sizing may have played a role in some of the women's premature sagging in the French research.

5. Bra Size Stays Stagnant — Even Though Your Breasts Aren't

Our breasts are incredible things that were made to withstand all sorts of changes in the body. They expand when you're pregnant, and then shrink again after you're done breastfeeding. They change shape and size if you lose or gain weight. Hell, our boobs even become a bit different when we're PMSing. Whether you wear a different size bra during these major physical changes could have an effect on your breast tissue and potential sagging.

Mary Jane Minkin, M.D., clinical professor OBGYN at Yale University School of Medicine, told Women's Health, "Anything that makes breasts expand and contract weakens the surrounding skin and tissues, which makes them lose elasticity and take on a deflated appearance." During all this growing and shrinking of your boobs, you don't want to do anything to exacerbate the loss of elasticity and suspension muscle tone; if you're going to slap on a bra, make sure it's the right size for the body you've currently got. If it's not, you could up your risk for damage to the muscles, tissue, and tone — all of which lead to sagging.

6. They're Often Worn Too Tightly

It may sound like it's the same thing as wearing the wrong size, but this is a different problem. Let's revisit the fact that our bodies naturally go through fluctuations on a regular basis: Say you're a bit more bloated than usual, maybe because you're on your period. Do you clip your bra at the same hook in the back as you normally do instead of loosening it up? That may contribute to chronic discomfort, but it also may be the reason your circulation is cut off and the breast tissue becomes impaired. And, thanks to Professor Rouillon and his team of researchers, we all know how that turns out.

7. They Probably Became A Part Of Your Life At An Early Age

Professor Rouillon hinted at this when he talked about the role of suspension muscles and breast sagging. He said, "If a woman begins wearing a bra from the moment breasts appear, the suspension muscles don't work correctly, and tissues slacken." If you're someone who strapped into their first bra at a young age, he suggests you may have developed a strong dependence on that bra, which has prevented your boobs from naturally fighting gravity on its own. Keep in mind this is just a hunch, since there was no specific data on the matter gathered in this study.

Even though their findings were definitive, the French researchers remind us that this is still a preliminary study (after 15 years, though?!) and that it may not be representative of the whole bra-wearing population — so take everything here with a grain of salt.

I'd say, however, that you should consider going braless for a while, and see if you like it. For all you well-endowed folks out there, know that there are braless options for big breasts as well. If you hate free-boobing it, revisit the bras you've got in your drawer. Check if they're the right size, the right fit, and that you're wearing them properly — you might also want to consider bralettes, which provide a sort of middle ground.

And finally — who says sagging is such a bad thing? It will happen naturally with age no matter what you do. Perky boobs are just another societal beauty standard. At the end of the day, what's important is that your breasts are healthy — because there's no way you can go wrong with happy boobs.