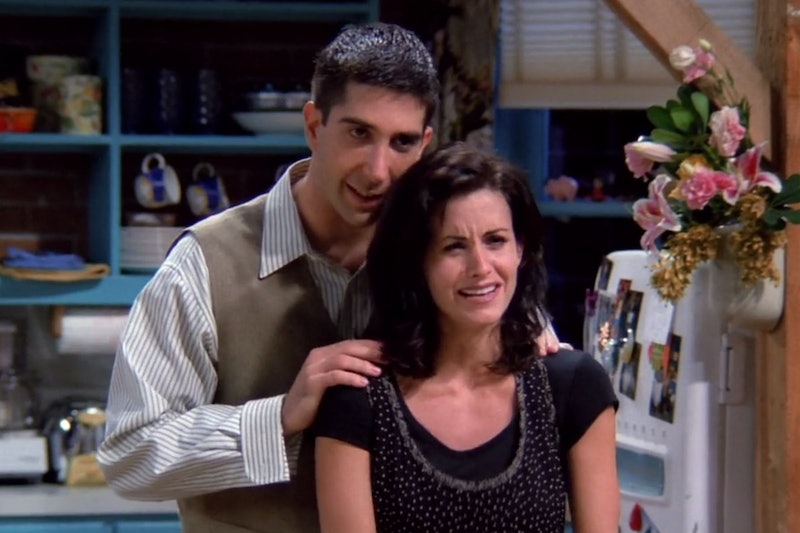 I have brothers now, but I didn't in the '90s. I really, really wanted a brother. Mostly so I could have someone to fight meanies for me, but also so I could play Pokemon with someone who could play Ash (I wanted to be Pikachu, duh). There were lots of reasons for wanting a brother in the '90s. A lot of them had to do with Hanson. Who were also a lot of our reasons for wanting a boyfriend. It was a fairly confusing time for feelings of fraternity and also of lust. Blame Paul Rudd in Clueless .

Brothers can be annoying. They fart on you or near you and it's horrible. They give you wedgies and pretend to spit huge gobs of saliva on you. They tease you about the things they know you're insecure about. But then as you start getting older, something magical happens. They start being your confidante and you theirs. You support each other. They lift the heavy things you can't lift yourself because you might be small and/or have pathetic upper body strength. They become your best friends. (The farting never stops, though.) Here are 12 reasons why all you wanted was a brother in the '90s.

1. So You Could Have Someone To Harmonize To "MmmBop" With

Sure, the Hanson Brothers were confusing because not only did you want brothers like them, you wanted to be on them. But overall, having someone to start a family band with: priceless.

2. So You Could Have Someone To Dress Up Like A Doll

There was something so much more satisfying about putting hair mascara and glitter eyeshadow on a brother than on a sister. I don't know why, but it was just so much more rewarding, beautifying a living male doll for some reason.

As I said, blame Paul Rudd in Clueless. This is the reason you hoped you'd get a cute stepbrother somehow. Because obviously that's the best way to get a date.

4. So You Could Steal Their Hyper Color T-Shirts

When I was a kid all the boys at my school had hyper color t-shirts, so I just assumed all boys came with a collection of the most awesome clothes you could imagine. Yes, I believed a brother would emerge from the womb for me complete with his color-changing t-shirt.

5. Because Brothers Are Really Good At Helping You Punk Your Parents

I'm not saying pranks are gender-specific, but with role models like Bart Simpson, boys seemed to have a penchant for punking parents. And sometimes you needed that extra injection of pranking genius. Because the '90s were all about how well you punk'd.

6. Because A Brother Would Always Have Your Back

Brotherly love in the '90s was very much defined by Monica and Ross Gellar. Ross always had Monica's back, and even though they bickered, he'd always give her a hug when she was down, or advice when she needed it. And that's why you really wanted a brother.

Thinking specifically of Monica and Ross, Ross was the big brother who bought Chandler into her life.

8. Because You Needed Someone To Play The Boy Power Ranger

Black, Red, Green, they could choose. You were pink or yellow, and you needed a brother to play one of the boys. If you had sisters, there was just too much bickering over who would get to play the two girls, because we weren't as "woke" when we were kids and just wanted to play our assigned gender. Also pink is the best color, gender completely aside.

Even though i was supposed to make them look dorky, "the Routine" on Friends was something you really wanted for yourself. The only thing you needed was a brother. And then the funky moves would flow.

10. In Case Robbers Ever Broke In And You Needed To Booby Trap The House

I think Home Alone gave us the idea that a little brother would be really, really great at booby trapping the house against intruders. Because everyone, of course, needed house booby trapping skills in the '90s.

11. Because One Day You Were Most Certainly Going To Get Lost In The Wilderness And Will Need To Go On A Huge Adventure With Your Brothers To Get Home

Of course sisters would work for this one too, but in Wild America it was brothers, so you'd want it to be with brothers too. For the record, these were also brothers that gave you confusing feelings about fraternity vs. lust.

12. Because Sisters Were Overrated Anyway

I mean, I never had a sister, so this is really easy for me to say. No offense to sisters either, but brothers just looked like a lot of fun, and they probably wouldn't steal your clothes.