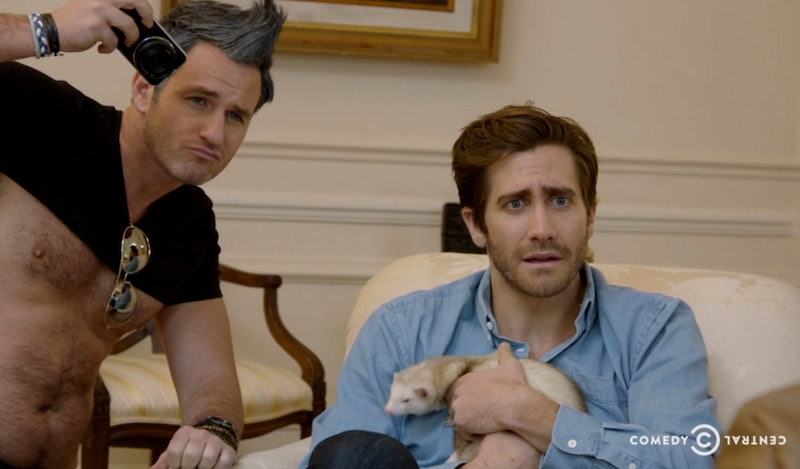 Here's a side you haven't seen of Jake Gyllenhaal in a while — or possibly ever, depending on how far back you go into the actor's film credentials (Bubble Boy kind of counts). The Oscar-nominated Gyllenhaal is taking a swing at comedy for the Thursday episode of Comedy Central's Inside Amy Schumer. In the sketch, Schumer parodies the popular MTV reality series Catfish, where hosts Nev Schulman and Max Joseph assist people in meeting their online partners offline — only to find out that the people they've been talking to aren't exactly what they expected. In Schumer's riff, titled Katfish instead, the online partner in question claims to be the very famous Jake Gyllenhaal. But there's a twist. I mean, of course there's a twist.

"Amy" says she met "Jake" a year ago in a chatroom for "ferret fanatics" and that, like all great love stories, is where it began. Nev, played painfully well by Broad City's Paul W. Downs, and his increasingly shrinking shirt assures her that there's no way this guy's legit. After Amy tells him that the actor claimed she was "the most beautiful woman [he has] ever seen" Nev points the interaction out as a "major red flag." Harsh.

Hilarity of these opening comments aside, the actual joke is on Amy and "the one with the grey hair and the one with not" (the hosts, as she calls them). When Amy and the hosts fly out to expose the "Katfish", things take an unexpected turn. And, yes, a ferret is 100 percent involved. I won't spoil it entirely, but as Gyllenhaal plays a parodied version of himself, the actor hits all the right comedic notes — all while swinging a ferret around. It really makes me question why he doesn't take on comedy roles more often. (Gyllenhaal, not the ferret. Though honestly, kind of both. The ferret was great and seemed super cool.)

If there's one thing Inside Amy Schumer knows how to do, it's everything. Oh, and the show also happens to be pretty good at surprising us with major celebrity appearances. This season alone, Lena Dunham, Liam Neeson, Steve Buscemi, Julianne Moore and even Gyllenhaal's sister, Maggie, have all graced the show with their stardom. But there's something unforgettable in the way Gyllenhaal toys with the line of drama and comedy in this particular sketch. It's a perfect mash up of the emotional roles Gyllenhaal's known for, with an acute self-awareness for just how ridiculous being a well-known celebrity must be. Can't a guy just find some love in a ferret fanatic chatroom like the rest of us? Apparently it's not so simple.

Check out the full Inside Amy Schumer episode — complete with this Jake Gyllenhaal sketch — when it airs on Thursday at 10 p.m. on Comedy Central.

More like this
Rihanna Is America's Youngest Self-Made Woman Billionaire, According To 'Forbes'
By Hugh McIntyre
What Is Miles Teller's Net Worth? How The 'Top Gun: Maverick' Star Made His Millions
By Meg Walters
Adele Says It Would Be “Wonderful” To Have Kids With Boyfriend Rich Paul
By Jake Viswanath
'Stranger Things' Star Sadie Sink's Love Life IRL Is Nothing Like Max's
By Alyssa Lapid
Get Even More From Bustle — Sign Up For The Newsletter