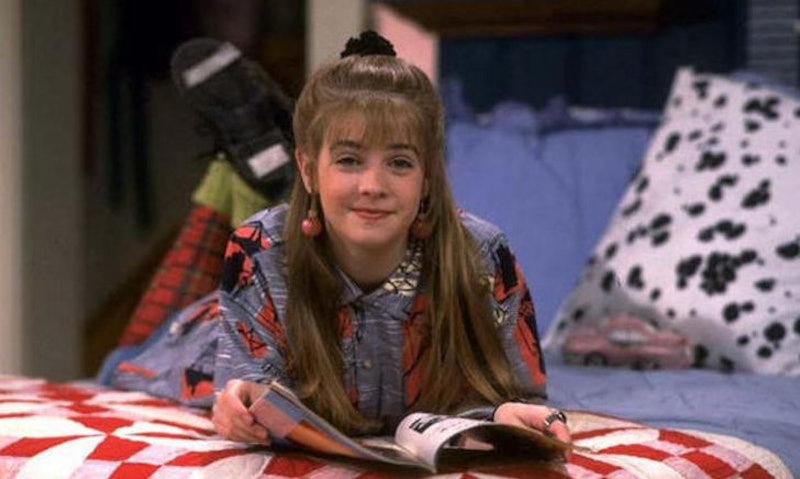 If there's a quote that serves as my personal mantra more than any other, I'd have to say it is, "Here's to strong women: May be know them, may we be them, may we raise them." I long ago folded those words into my psyche, and cherish them even more now that I have a daughter — who recently, while defending her little brother's love for a sparkly pink bracelet against a throng of older cousins, reminded me of the things every feminist did as a kid. Myself included, because the whole "may we be them" part of my mantra didn't just materialize out of thin air one day. There were signs stretching back to childhood that I was a feminist kid who would one day grow up to become a feminist woman.

In fact, some of us were particularly fortunate in that we had a parent or parents who raised us to be feminists. My mom raised my siblings and myself as a single mother, putting herself through school and becoming one of the top healthcare professionals in her field. She made sure my brother, my sisters, and myself always knew we could do whatever our hearts desired. When my brother showed an early interest in cooking, she got him an apron and encouraged his use of my Easy-Bake Oven. When I said I wanted to be a neurosurgeon, she bought me a book on the human brain. She always emphasized empowerment and equality, and I'm forever grateful for her setting that model of motherhood for me.

Regardless of how you were raised, though, if you're a feminist now there are some things you probably did growing up that were surefire signs you were well on your way to becoming a feminist for life. Let's explore.

1. Wrote A Report On A Woman Who Defied Gender Norms

You may not have always realized it was what you were doing, but feminist kids rebelled against gender norms by admiring those who defied them. Think back. Did you do ever write a report or do a class project on Bessie Coleman, Joan of Arc, Susan B. Anthony, or Marie Curie? Oh, what's that you say? All of the above? Little you was a feminist badass in the making.

2. Loved the Heck Out Of Both "Gross" And "Girly" Toys Indescriminately

Maybe you liked your brother's G.I. Joe's more than you liked the Barbies your parents kept buying you. Or maybe you liked your Barbies just fine, but also had an arsenal of other toys that were deemed too "gross" or "tomboyish" for a girl. Well, gender norms be damned, 'cause you couldn't get enough of Gak and Creepy Crawlers and those little kits that encouraged you to go outside and collect real live bugs. You may very well have loved your dolls just as much; the point is that you never payed attention to the notion that toys of toys being gender specific. They were just toys.

3. Wanted To Be Kat From 10 Things I Hate About You

Depending on your generation, the object of your emulation may vary slightly. But the bottom line is you found a strong female protagonist with whom you aligned your beliefs. For me, that was Kat, who actively avoided being someone's girlfriend in favor of shredding on a Fender, reading feminist lit, pursuing her education and basically taking the patriarchy down a peg whenever possible.

4. Stuck Up For Someone Being Picked On

Feminist women aren't afraid to use their voices, and that starts early in life. You can always spot a feminist kid, because they are the ones who champion for the rights of others. Sure, when you were young, that probably meant fighting for someone's right to sit at their normal spot at the lunch table or defending their Lisa Frank obsession, but it was a precursor to the advocating you'd be doing later in life for gender equality.

5. Rocked Out To Feminist Anthems Like No Doubt's "Just A Girl"

I suppose you can use the term "kid" here loosely, as you were likely a preteen by the time your parents let you listen to the kind of music your little feminist heart craved. If you were a child of the '90s like me, this likely means Gwen Stefani and other angsty chick rockers like Alanis Morissette, Meredith Brooks, and Courtney Love. We can't leave Spice Girls out of the equation either, who were all about girl power. And, naturally, you dreamed of attending Lilith Fair.

I know what you're thinking: don't all kids try to get out of chores at some point growing up? That may be the case, but if you were a feminist kid the odds are good you very specifically tried to get out of your chores ... in favor of others. Why did you always have to do the dishes, while your brother got off easy with the five-second task of taking out the trash?

7. Found Your Counterpoint In A Cartoon Character

For older '90s kids, this will always be Daria, who didn't care about fitting in and whose resting bitch face felt like looking in a mirror. But it could also mean Judy in Doug, Reggie Rocket from Rocket Power, Susie Carmichael from Rugrats, or Mr. Simmons from Hey Arnold! Really and truly, the list goes on. Every kid watches cartoons, and every feminist kid finds a cartoon that has at least one fierce, equality-loving character.

More like this
How To Fight For Reproductive Rights, Based On How Much Time You Have
By Courtney Young
Alicia Silverstone Has Recreated An Iconic 'Clueless' Scene
By Frances Stewart
34 Quotes That'll Inspire You On Juneteenth & Beyond
By Syeda Khaula Saad and Siena Gagliano
Everything To Know About 'Scream 6'
By Jack Irvin and Jake Viswanath
Get Even More From Bustle — Sign Up For The Newsletter