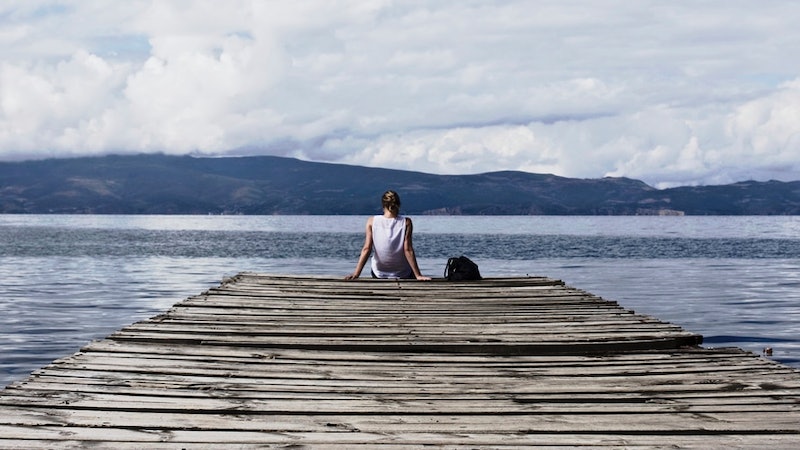 No matter how you look at it, failing sucks. But perhaps worse than the initial, horrible letdown, is figuring out how to get back on your feet after failure. There are so many stages, and things to overcome, that it can feel almost entirely impossible.

I know I've had the dramatic moment where it feels like the only thing left to do is give up, and I'm sure you have to. That's because failure has a way of sticking right to your self-esteem — thus making it even more difficult to handle. "Often we view failure as caused by internal sources, than external ones. This means we blame ourselves for things that are actually external, and out of our control," says psychologist Nicole Martinez Psy.D., LCPC, in an email to Bustle. "Taking on that kind of responsibility and view of ourselves can have a very negative impact on our self-esteem, our belief in ourselves, and the way we think others perceives us."

This feeling, of course, can be made even worse if you have lower self-esteem to begin with. "To have something negative piled on top of that is only going to make [you] feel even lower," Martinez says. So the thing to keep in mind, whether you're experiencing a minor bump in the road, or the biggest failure of your life, is this: it happens to everyone. "We all fail, if we can accept that as part of the human experience, learn from it, [and] pick ourselves up from it, we are someone who is to be admired," Martinez says. Below are some ways to do just that.

1. Don't Label Yourself A "Failure"

Since self-esteem is so affected by failure, it's important to remember that you're mistakes don't define you as a person. Yes, they happened, and they are worth learning from. But don't connect it too closely to your identity. "Just because you haven’t found a successful way of doing something (yet) doesn’t mean you are a failure," said Susan Tardanico on Forbes. The failure is something that happened to you, but it isn't you.

If you don't get the job, your relationship fails, or you get fired, be prepared for an onslaught of feedback and critiques from others. It's natural that your friends and family will want to help, but be discerning when it comes to actually internalizing their feedback. As Martinez says, "Take feedback for what it is worth. If the feedback that you are given is valid, and given to you in a good spirit, take it in and make those changes. These little tweaks can make all the difference between success and failure."

3. Have Yourself An Outburst

It can't be said enough — failure sucks. It's embarrassing, upsetting, frustrating, and horrible. And with all those emotions swirling around in your head, it can really scare you out of any second attempts at success. So do yourself a favor, and get it all out of your system. "Don't keep how you feel trapped inside of you like a shaken up soda," said Patrick Allan on Lifehacker.com. Cry in bed, go to the gym, write a sad poem, and then move on.

4. Talk It Out With Friends & Family

Once you've dealt with your initial meltdown, think about having a chat with your friends and family. "Chances are whoever you talk to will try to make you feel better, but even if they don't, saying how you feel out loud puts that information out somewhere besides your brain," Allan said. And really, nothing can be more helpful than that.

5. Get Yourself A Support System ASAP

Part of moving on from a failure is resilience, and one of the best ways to stay resilient is with a strong support system. In fact, a 2007 study found that social support can actually boost resilience to stress, according to Carolyn Gregoire said on HuffingtonPost.com. So call your mom, and rally your friends, because you'll definitely need them to get past this pitfall.

For a quick dose of inspiration, get on Google and research someone you admire. Maybe it's an entrepreneur, CEO, or blogger who is currently living your ideal life. "Take a look at the failures they've encountered in their lives and work. Read biographies, blogs, and listen to speeches. Successful people talk about failure just as much as they talk about success, and it's because they respect how important it is to embrace it," Allan said. It can be a pretty great reminder to see that your idols didn't nail it the first time, either.

Another huge part of dealing with failure is keeping the situation positive, and maybe even a little bit funny. Did you bomb your interview in a hilarious way? Was your date comically bad? Laughing it off can be incredibly helpful, according to an article by Ray Williams on Psychology Today. If it's a small failure, he said, then look for the positives, and the humor. After all, there's no use dragging yourself down further.

The good thing about failure is it allows you to start over fresh. If your previous attempts failed miserably, now's your chance to tackle it again with fresh eyes. Or, it could be your chance to go in a different direction entirely. Admit it — all the options are kind of exciting.

9. Start On Your Next Project

Wallowing for a brief period is fine, but you'll want to start on your next project the moment you have the gumption. "The faster you take a positive step forward, the quicker you can leave these debilitating, monopolizing thoughts behind," Tardanico said.

The old "get back on the horse" mentality really does work. And it's going to be necessary, time and time again, if you want to be successful and reach your goals. "Practice makes perfect, so give yourself a reasonable timeline to prepare, and give it another shot," said John Boitnott on Inc. This applies to dating, job interviews — everything. Get back out there, and try again.

11. Remember It's All About The Learning Process

Very rarely do people get it right the first time, so you're in really good company as a total failure. (And I say that lovingly.) Yes, it sucks, but don't let your failure affect your self-esteem, define who you are, or prevent you from trying again. Give it another go, and you'll have success eventually.