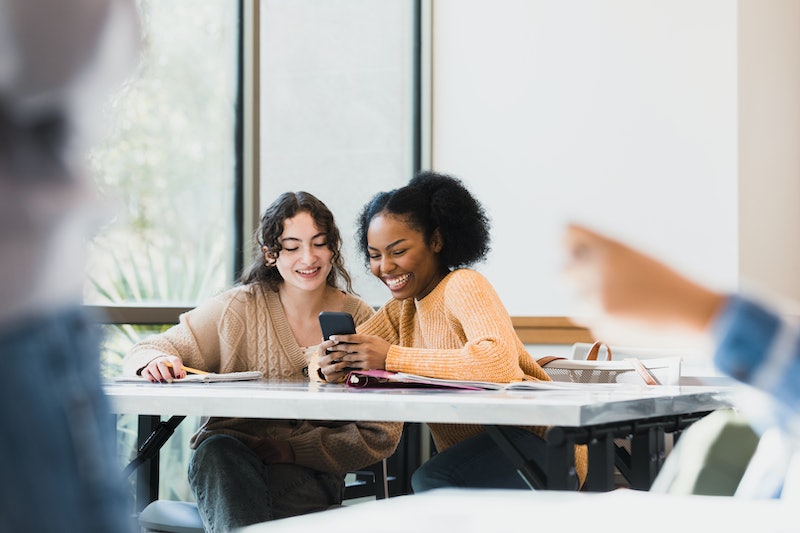 It's no secret that we live in a sexist and misogynist society, but sometimes the way misogyny sneaks into our daily lives can be a secret — or at least, it can be extremely subtle, particularly with regards to our friendships. Indeed, there are a huge variety of ways internalized misogyny sneaks into our friendships, oftentimes without people even realizing that misogyny is at play. It's one of the worst symptoms of the patriarchy — misogyny is so often acted upon that it becomes deeply seated, often unconsciously. Only upon closer inspection can it be revealed that this behavior, which we've been conditioned to consider "normal" or "standard," is actually hurting us all.

Back in December, Bustle writer Suzannah Weiss explained some examples of how this internalized misogyny can manifest in our everyday lives, including looking down on other women, slut shaming other women, playing up your feminine qualities, playing up your masculine qualities, or resenting feminine women. All of these things may seem commonplace, but the fact that we consider them so is evidence in and of itself that there are harmful forces at work teaching us equally harmful lessons: That femininity isn't of value, that only the parts of us that are masculine deserve any respect, that we are all in competition with each other all the time.

The lessons about competition can be particularly harmful when it comes to our interpersonal relationships, especially friendships. It's how things like "frenemies" — a term which is pretty much exclusively reserved for women — have become accepted as the norm. So, with these and other sneaky ways internalized misogyny manifests in mind, let's explore five ways it can sneak into your friendships — firectly or indirectly.

Although it's entirely possible that this query might be directed at someone other than your friends — a parent, another trusted individual, a significant other — it appears most often in our friendships: As we shop together, as we get ready for a night out together, as we help each other prepare for a first date, and so on. But the issues with it are twofold: First, the question itself suggests that fat is inherently "bad" — that it's a thing to be avoided, and that people who are fat are inferior. This kind of internalized body shaming is a well-documented effect of a patriarchal society, which places an absurd amount of value on looks and looking a certain way — even though the beauty standards are completely arbitrary.

Furthermore, asking this question of your friends — or having them ask it of you — on a regular basis turns your friendship into a vehicle for internalized misogyny. It perpetuates it, even if neither you nor your friends are intending it to do so.

2. Using Gendered Terms To Describe Or Judge Each Other

"She's too outspoken." "She takes her feminism too seriously." "She's such a b*tch." Although it might be more common for boyfriends or male friends to criticize your friends with these words , women also fall into the trap of using them as well. There are so many words and insults we use every day that most of us may not realize are gendered — but they are. And whether we are using them ourselves or simply not speaking up when we hear other use tem, casting judgment with words rooted in sexism is one way internalized misogyny can sneak into our friendships — not to mention that doing so is often a way this next point manifests:

3. Pitting Your Friends Against One Another

Our sexist society often places women in direct competition with one another, even when there's no benefit to doing so — which, in turn, has conditioned us into pitting ourselves and our friends against one another. Making someone feel like they're not cool enough, not important enough, or not a valuable part of the friend group obviously harms your friendships and creates a hostile environment.

4. Criticizing Your Friend For Sleeping Around Too Much

Slut shaming is one of the prime examples of misogyny affecting friendships. Assigning a "right" or "wrong" number to how many people someone can or can't sleep with is problematic and encourages sex-negative attitudes — and besides, who your friends sleep with or how they live their sexual and romantic lives is no one's business but their own. If there's violence or abuse involved and your friend asks for help, that's another story — but generally speaking, no one has any say over a friend's sex life simply because they happen to be friends.

When you've got a group of female friends but you constantly tell other people, "I'm not like most girls," you're putting down the people who might eb your best friends. The statement implies that there's something wrong with girls — including your female friends. And that kind of mindset can affect your friendships for the worse.

More like this
How To Fight For Reproductive Rights, Based On How Much Time You Have
By Courtney Young
GIRLI & Q Fell In Love At A Skatepark & Never Looked Back
By Jessica Morgan
Juneteenth Is Now A Federal Holiday — Here's What That Means
By Lani Seelinger and Syeda Khaula Saad
34 Quotes That'll Inspire You On Juneteenth & Beyond
By Syeda Khaula Saad and Siena Gagliano
Get Even More From Bustle — Sign Up For The Newsletter