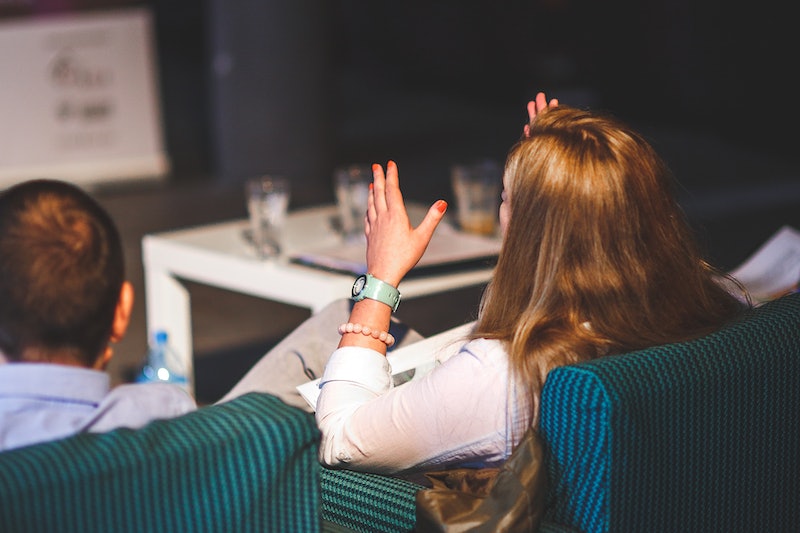 As a writer, the expression "the pen is mightier than the sword" has always resonated with me, for the obvious reason — words are powerful. The implication of the words we choose can cut deep and sink in swiftly, or it can reveal itself at a measured pace. But language is also a complex and ever-changing system, and sometimes we don't even realize the things we're saying are harmful and oppressive to other people. Such is the gist of microaggressions, and there is one sexist microaggression in particular we're all probably guilty of using (and, let's be real, overusing) nearly every single day. So, let's start with a simple question — have you ever called anyone a "bitch?" Think about that for a minute, and we'll circle back around.

When I was discussing this topic with a friend recently, she meekly admitted she wasn't entirely sure what microgressions are. And that's OK! As women who want to effect change, we shouldn't be afraid to admit when we don't understand a concept or would like further clarification. We should be able to discuss these things openly without fear of judgment or being made to feel we're not feminist enough or smart enough or anything enough. Hey, you who is reading this right now ... you are enough.

So, now that we've gotten that out of the way, let's dive in: "Microaggression" is a term used to describe subtle acts of discrimination. It was coined in 1970 by Chester Pierce in reference to the prominent racist insults and dismissals he witnessed. A few years later, in 1973, MIT economist Mary Rowe expanded the term to include gender-specific microaggressions. Ultimately, the term has come to represent the casual denigration of any marginalized group of people.

The trouble some people have with the concept of microaggressions — and specifically sexist ones — is that they are unable to reconcile the idea that a person can say something sexist or misogynistic without being implicitly a sexist or misogynist. So, for example, a man might argue that he couldn't possibly have said something sexist because he isn't a sexist person. However, using oppressive language and being an oppressor are not mutually exclusive. While, yes, all people who are sexists and misogynists use sexist and misogynistic language, not all people who use sexist or misogynistic language are sexists and misogynists. Sexist microaggressions are small, less-conscious things we say and do that further the marginalization of women. They exist largely because of internalized biases and stereotypes about women which have and continue to be reinforced by popular culture. Common defenses of microaggressions include the classic "it's not a big deal," "you're blowing this out of proportion," and "but I didn't mean it in that way" arguments.

The inherent flaw of that logic, however, is that little things turn into big things. Sexist microaggresions are insidious. Collectively, all of these tiny insults and unintended barbs build up. Regardless of the intention, they do exactly what the words were designed to do — hurt and subjugate. Collectively, they reinforce prescribed gender inequalities and create hostile environments in which women must continue to live, work and socialize. They validate a society in which women are still not considered equal to their male counterparts. Sexist microaggressions are so entrenched in the fabric of our culture that we are all too often unaware we are using them. Which brings us back to the word of "bitch."

Originally, the word bitch (noun) was used to define a female dog or a female, mothering dog. It has since seeped into our vernacular in other forms, meriting the following addendums in the dictionary: "a lewd or immoral woman," "a malicious, spiteful, or overbearing woman — sometimes used as a generalized term of abuse," "something that is extremely difficult, objectionable, or unpleasant," and "complaint."

Basically, "bitch" is a word which is used culturally to describe any woman who is outspoken, or strong, or uncompromising, in a derogatory manner. While an assertive man is simply seen as assertive or a "boss," women with the same assertiveness are routinely labeled as a "bitch." A woman who ignores catcalls from men as she walks down the street or who ignores a man's advances might be labeled a "bitch." Men are not the only ones who use this sexist microaggression, though. Women — myself included — toss it about too. There is an entire hashtags built around its use in casual conversation on social media.

But, you might say, women are reclaiming the word. We're taking the power back for ourselves. And, hey, I'm all for that. Among my best friends and sisters, "bitch" is essentially a term of endearment. We use it to refer to "mouthy, smart women," as Bitch magazine founder Andi Zeisler puts it. To use, it describes a woman who doesn't apologize for her boldness. A woman who doesn't shy away from confrontation. A woman who bucks the patriarchal assumption that women should be passive to men. But the reclamation of the term isn't without controversy because, as with most things in this world, the lines are often blurred (intentionally or otherwise).

A woman using the word "bitch" to describe herself or a friend and proverbially wearing the word is an act of empowerment. A man using the word exists in an entirely different context. It then becomes an insult. Here's where it gets even trickier and why it is the a sexist microaggression we've all likely used or are using: Women don't just wield it ironically or in an empowering way. We, too, are guilty of using the term "bitch" as an insult. For example, if a fellow female colleague at work were to betray you, and you called her a "backstabbing bitch." Or, if in reference to a friend who is in a mood, you say, "She's being such a bitch." When used in this way, we have picked up that power we reclaimed in the first place and handed it right back to the men who would have women see themselves as inferior.

If the historical meaning of a word is derogatory, it always has the potential to do harm. Even though women do use the word "bitch" in a reclaimative way, that doesn't mean the word is OK for men and women to use as an insult. But we continue to do so, making it one of the most common sexist microaggressions there is. Since the only way to ever completely clear the word of any sexist implication is through non-usage (which, let's face it, is entirely unlikely to happen), we have to take a minute to look at our behavior and try to find a way to avoid endowing the term with the power that makes it such a subversive and sexist microaggression.

How do we do that? There are many different ways of responding to sexist microaggresions, and what works for one person might not necessarily be in another's wheelhouse. As a general standard, though, we as women need to be more cognizant of how we use the word. If we don't like something someone is doing, there are plenty of other words we can use that don't rely on invoking gender for their bite. Falling back on "bitch" is ignorant and, well, lazy. The same goes for men — when you use the word "bitch" as an insult, you are quite specifically perpetuating a culture of gender oppression. When you hear someone use this sexist microaggression, ask them why they chose that word. If they explain it is out of habit or it was an unconscious decision, use that opportunity to open a dialogue about sexist microaggressions and how they marginalize women.

Confrontation isn't a bad thing. Again, a woman having an impassioned opinion does not make her a "bitch" in the stereotypical sense of the word. If we, as women, don't speak up for ourselves, who will? Confrontation does, however, often get heated. All too often, this leads to someone shutting down and refusing to truly hear what the other is saying. Don't be opposed to trying a more subtle form of confrontation, i.e. instead of "You're wrong," saying "That's not always the case, and here's why." We won't win the battle against sexist in one conversation, and we certainly won't eradicate this particular sexist microaggression in one sitting. Gentle reminders and easing into those impassioned discussions make way for the bigger conversations to effect change.