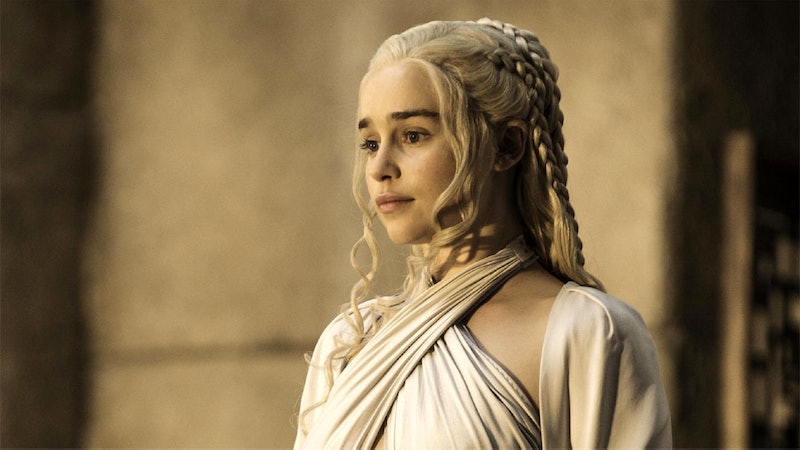 Game of Thrones fans currently find themselves in a unique position. Well, let me rephrase that: Game of Thrones fans who have also read George R.R. Martin's A Song of Ice and Fire book series currently find themselves in a unique position. That's because the sixth season of the show has left the books in the dust, and the series is now making new and unknown revelations left and right. That means fans are mostly in the dark about what's happening next, although it is still possible to make some predictions about Game of Thrones' season 6 finale.

First, allow me to say what I don't think will happen in the season finale. I don't think Daenerys will invade Westeros, and I don't think winter will come to King's Landing. These are two of the biggest plot points of the show that have both been teased since the very beginning, but there is reason to believe that neither will occur on June 26. As far as Daenerys is concerned, she's still a good ways away from Meereen and has business to take care of there before going anywhere, not to mention that she doesn't have any ships yet. And four episodes is not enough to resolve those issues for her. Now, as far as winter goes, Sam just mentioned in episode 6 that it is now autumn in the Reach — which isn't that far from the capital. I expect autumn to be brief, but I also expect it to last longer than four episodes, meaning no snow just yet. Now with that out of the way, here's what I think could happen.

1. Daenerys Gets Her Ships

She may not be ready to sail yet, but there are a ton of Ironborn on their way to her right now. And in order for the Greyjoy storyline to have some kind of payoff this season, they need to do something big. And forming an alliance with Dany — whether it comes from Yara or from Euron — could be just the thing.

Cersei's trial by combat has been teased all season, and the finale seems like a prime destination for it to take place. Everyone already knows Cersei will trot out the reanimated Mountain as her champion, and most fans think the Faith will be represented by the Hound. Book readers know Sandor Clegane is rumored to be alive and reformed as a monk, and series newcomer Ian McShane has more or less confirmed that the long thought-dead character is returning this season.

Game of Thrones has no bigger black eye than their garbled Dornish plot, and the storyline hasn't even shown up at all in the past five episodes. It's unlikely that they've been completely written out of the show just yet, however, and an invasion of King's Landing while the city is distracted by Cersei's trial could go a long way toward salvaging their mishandled plot.

4. Arya Reunites With Nymeria in Westeros

I admit this is part wishful thinking, but given the show's horrific treatment of direwolves this season, I feel like fans deserve to see Nymeria again. Now with Arya realizing she's not no one after all, a return to Westeros seems like it's in the cards for her to close out the season, and meeting her old pooch would make for the perfect homecoming.

Although the show is ahead of the books, there are still some plots lines from the novels that are showing up later than they should have. One such plot is Jaime heading to the Riverlands, where he is destined to reunite with Brienne. In the books, this meeting leaves off in a cliffhanger regarding Jaime's fate, and I feel the show may go a similar route.

Fans have already been given glimpses of the Tower of Joy thanks to Bran's visions, and I'm willing to bet the magical Stark learns the truth about Jon's parents during yet another vision in episode 10.

7. The White Walkers Reach the Wall

The Children of the Forest are gone. The Three-Eyed Raven is gone. The Night's Watch is decimated. The Wildlings will be fighting Jon's war for Winterfell (which I'm guessing takes place in episode 9, the typical battle episode every season). That means there's basically nothing stopping the Walkers from reaching the Wall, and I'm guessing the final shot of the season will be the Night's King and his army of the dead standing at the base of the structure.

So there they are, seven predictions for the Game of Thrones season 6 finale. If all of these come to pass, then fans could be in for the show's most epic finale yet — and that's saying something.

More like this
Does 'Locke & Key’s Ending Mean There Could Be A Season 4?
By Sophia Moore
The 'PLL: Original Sin' Creators Say A’s Identity Will Be “Very Clear” By The Season Finale
By Alyssa Lapid
Gwendoline Christie’s Partner Is Part Of Royal Family History
By Parry Ernsberger and Sophie McEvoy
'The Simpsons' Will *Finally* Address How They “Predict The Future”
By Sam Ramsden
Get Even More From Bustle — Sign Up For The Newsletter