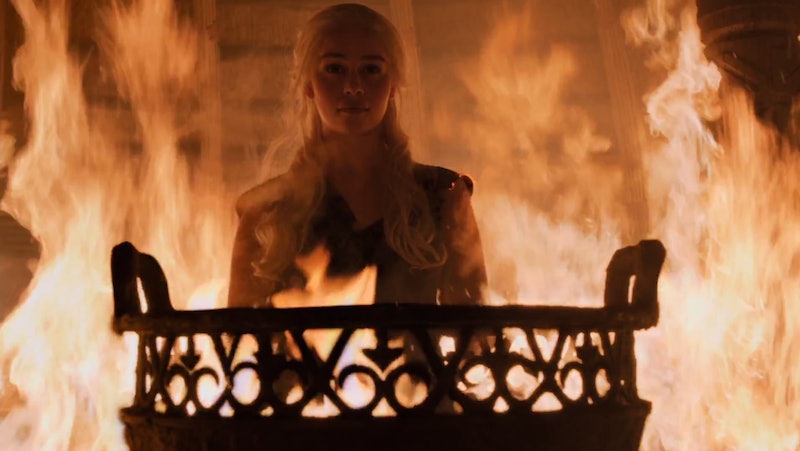 Game of Thrones has been one of the best shows — if not the best show — on television since it premiered. While I'm not usually inclined to say a season is going to be the strongest before it even finishes airing, so far Season 6 of Game of Thrones is the best season of the already tremendous series. I had previously been thoroughly impressed with what showrunners David Benioff and D. B. Weiss created in the sixth season, but the May 22 episode "The Door" has forced me to make my "best season" proclamation early. And, with big reveals in each episode, concrete storytelling, moments of genuine hilarity, and moments of genuine grief, how could I not think Season 6 is the best Game of Thrones has ever done?

Perhaps it has to do with the fact that the TV series is following its own trajectory since it is going beyond the George R. R. Martin books that are its inspiration, but Game of Thrones has been nailing it in 2016. I have never been so satisfied by a season of the excellent show in the previous five seasons as I have at the halfway point of Season 6. I'm not alone in saying that Season 6 is the best since Benioff claimed to Variety that the current season would rock fans' socks off before it even premiered.

With five episodes down and five episodes to go, I couldn't agree with Benioff more and I just hope that as the next five hours unfold Sundays on HBO that my statement remains true. If you aren't ready to commit to Season 6 being the best of Game of Thrones just yet, here's a little reminder of the most badass moments that have already gone down in the first five episodes of this season in anticipation of the epicness that is yet to come.

The Partnership Of Brienne & Sansa

It was my hope that Brienne and Sansa would team up in Season 6 and my prayers were answered almost immediately in the premiere episode. Sansa realized she had been wrong to deny Brienne's service in Season 5 and after Brienne and Podrick saved Sansa and Theon from Ramsay's men, the dream team of Brienne and Sansa was created.

Melisandre has been the bane of my existence since she stepped on the scene, but Season 6 has shown a more humble side to the red priestess who serves the Lord of the Light. Season 6 also has shown a more "WTF" side to the red priestess since in the final moments of the premiere episode it was revealed that she's actually ancient and her magic necklace gives her the illusion of youth. Like when Jaime pushed Bran out the tower in the last moments of the Season 1 premiere, this scene set the tone for crazy revelations in Season 6.

Tyrion Targaryen theorists everywhere rejoiced when Tyrion successfully unchained Daenerys' dragons Rhaegal and Viserion in the second episode of Season 6. Whether Tyrion ends up being a Targaryen or not, this moment was suspenseful and a huge win for Tyrion who is finally being the leader Tyrion fans have always known he could be. And, it would be pretty badass if Tyrion ends up being able to ride a dragon in the long run.

After months and months of the cast of Game of Thrones evading questions about the fate of Jon Snow, the series gave fans the answer much quicker than expected. While I wasn't necessarily shocked that Melisandre resurrected Jon Snow since that's what I had expected to happen, I was stunned that the series didn't drag out this plot point by having the second episode end with Jon Snow gasping for breath. Not to mention, it has been damn good to have the virtuous and swoon-worthy Jon Snow back in the land of the living again so soon.

Ramsay Being The Worst

Ever since Joffrey died, Ramsay Bolton has been the number one character that everyone loves to hate and his despicable nature has only increased in Season 6. From the surprise stabbing of his own father to the horrendous murder of his stepmother and half brother via his dogs, Ramsay's bloodlust hasn't relented. Now that he has killed Osha and has Rickon Stark (R.I.P. Shaggydog!) in his possession, his murderous days are numbered if Sansa and Jon have anything to say about it.

The Starks are perhaps the most beloved family on Game of Thrones and they also are the ones who have experienced the most heartache, so when Sansa and Jon were reunited, it was one of the happiest moments of the entire series. Not only was this family reunion the dose of hope that Game of Thrones fans need to keep going, but it's the perfect set up for the Stark family to take back the North and Winterfell. Here's hoping Jon avenges the honor of his sister and saves his little brother Rickon by cutting down Ramsay at the end of Season 6.

Another brother-sister pair that have been reunited in Season 6 are the Greyjoys. My only complaint about Season 6 has been the quick transformation of Theon from Reek, but Yara being a central character on the series again makes up for that. While it's slightly disappointing that a man without his manhood isn't considered worthy to rule, Theon is absolutely right to back his sister as the deserving heir to the Iron Islands. Just like with Sansa and Jon, their reunion has given another woman a power position. Plus, it has introduced the new character of Euron who is sure to create an exciting dynamic when he either tries to woo Daenerys or hunt down his niece and nephew.

I have noticed that Game of Thrones has scaled back its use of the naked female body in Season 6, which I approve only because I desire equal screen time of both male and female genitalia (I saw you there, penis of the Braavos player). But one notable exception came in the form of Daenerys, who proved once again to the Dothraki that she should be feared. When Khal Moro and his other khals vehemently scoffed at the idea of Daenerys being their leader, she showed them who the boss was by burning them all down and emerging naked from the flames. Ah, never change, Daenerys.

The Evolution Of Sansa

The Game of Thrones showrunners justifiably received a lot of grief for Sansa being raped by Ramsay in Season 6 since it wasn't originally part of Martin's books. While they told Entertainment Weekly that they wouldn't let fans' reactions to Season 5 influence the story in Season 6, I have to say I'm glad they let Sansa become incredibly empowered this season. Sansa has had it rough since she became betrothed to Joffrey in Season 1, but no mistreatment has had such a massive impact on her personality than what occurred between her and Ramsay at Winterfell. She has finally become the leader she was born to be and when she made Littlefinger articulate how Ramsay treated her in Episode 5, I couldn't help but be proud of her strength.

Despite all of the horrors that occur in Game of Thrones, the show has been infusing more lighthearted moments than ever before this season and the best of all of these has come in the form of Wildling Tormund's unabashed crush on the reluctant Brienne of Tarth. Fans took notice immediately and the 'ship of Briemund was born. The memes of Tormund having eye sex with Brienne while she rolls her eyes are fantastic and I so want Brienne to give into her wild(ling) side with him.

As completely and utterly devastated as I was about the truth of how Hodor came to be (I've watched it four times and I still can't make it through the scene without sobbing), "The Door" was the best episode of television I have ever seen — ever. The realization of the six-season long character arc was a stroke of genius that even book readers didn't know was going to happen. While Bran's story line with the Three-Eyed Raven can be confusing, the consequences of Bran's warging led to one of the most tragic moments in television history. Bran's mistake sealed Hodor's fate decades earlier and it has now cemented the series warning of "Winter is coming" since the White Walkers' Night's King marked Bran.

It may have taken six seasons for winter to come, but it's here and I can't wait to see how it will play out in the rest of the five episodes of the stellar Game of Thrones Season 6. Benioff may have sounded like a salesman when he said Season 6 would be the best, but he has delivered on that promise so far.