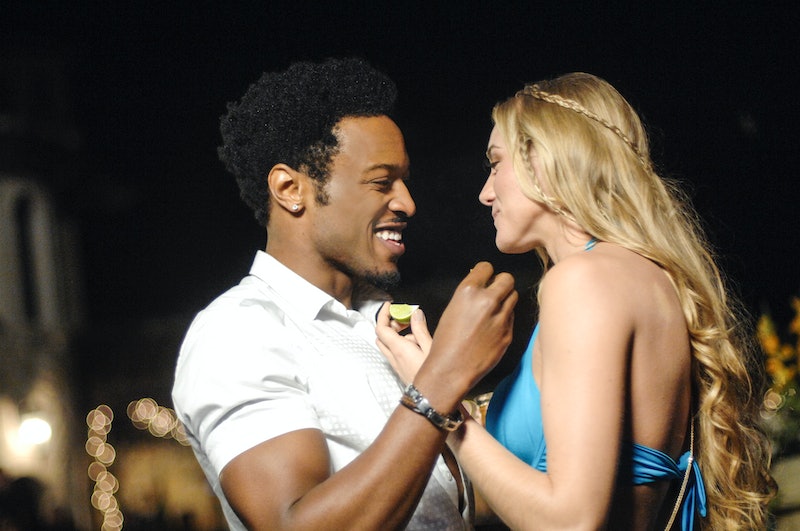 When viewers tune in to Lifetime's UnREAL Season 2 premiere Monday night, June 6, they'll be faced with something rarely seen before in the history of mainstream reality television: A black leading man on a Bachelor -like reality show. Although The Bachelor, the real-life competition series that most closely echoes UnREAL's fictional reality show Everlasting, has not had a single bachelor of color in 20 seasons, the Lifetime drama will soon introduce viewers to Darius Beck, the African-American suitor played by Agents Of S.H.I.E.L.D.'s B.J. Britt.

While Season 1 of Lifetime's breakout summer series mostly revolved around issues of gender and feminism, Season 2 will be playing the race card — loudly and proudly, according to star Gentry White, who is joining the cast as Darius' cousin and manager, Romeo.

"The race aspect of this season alone is already a character in and of itself," White tells Bustle. And it's not just about Darius, either. "There are black contestants as well," he says — and obviously his own character, too. "There's things dealing with our hair, there's a girl who wears a Confederate flag bikini, there's a number of different things that affect each and every person of color on the show."

But how exactly has The Bachelor managed to exist on television for 14 years without a single suitor of color? "I just think that it's out of fear that ratings wouldn't be as high," White suggests. "When people think of a Prince Charming, their first thought is a white, parted-hair British guy," White says. "If we look at The Bachelor or The Bachelorette, there’s a consistency with each person who’s chosen to be the [suitor]. … Everyone pretty much looks the same. It’s a formula, and people eat it up." But, "What does that say about America?" he wonders.

The fear that a bachelor of color would cause ratings to dive seems counterintuitive when faced with the recent successes of shows like Empire and How To Get Away With Murder — not to mention the 2016 Hollywood Diversity Report, which proved that movies and shows with diverse casts make quantifiably more money than movies and shows with all-white casts. While the world still holds its breath for a black bachelor, White agrees that those aforementioned shows "have been so successful in helping move things forward in a really good way." He adds, "Yes, it’s kind of the early start of it, but you can see it happening. … From years ago when I first became an actor to now, there are so many more opportunities, and people are having conversations like this."

White is thrilled that UnREAL is tackling this subject just two seasons in. "I’m happy to be a part of a television show that is a part of the conversation, because it needs to be talked about," he says. The actor claims The Bachelor's whitewashing is not just behind-the-times, but actively harmful.

"For me, personally, it just kind of makes me feel like black men and black women or people of color, we’re not as attractive or as appealing as other races are," White says. "Because our hair doesn’t flow the same way as a white man or a white woman — or our skin tone alone, which is something we can’t even change if we wanted to — all these things make us feel very secondary." He continues, saying, "And then when you watch a television show like The Bachelor and you see these whole orchestrated fireworks and these amazing islands and villas that they get to stay on, and you don’t see anyone who looks like you that could possibly have that be their story… it kind of hurts after a while."

But White has hope. "People that get hurt always eventually figure out how to be un-hurt, and that’s what we’re currently trying to do [on UnREAL]," he says. Sounds like we're in for another thought-provoking — but also wildly entertaining — season of television. "I'm pretty excited to see how it goes," White admits. Same here.