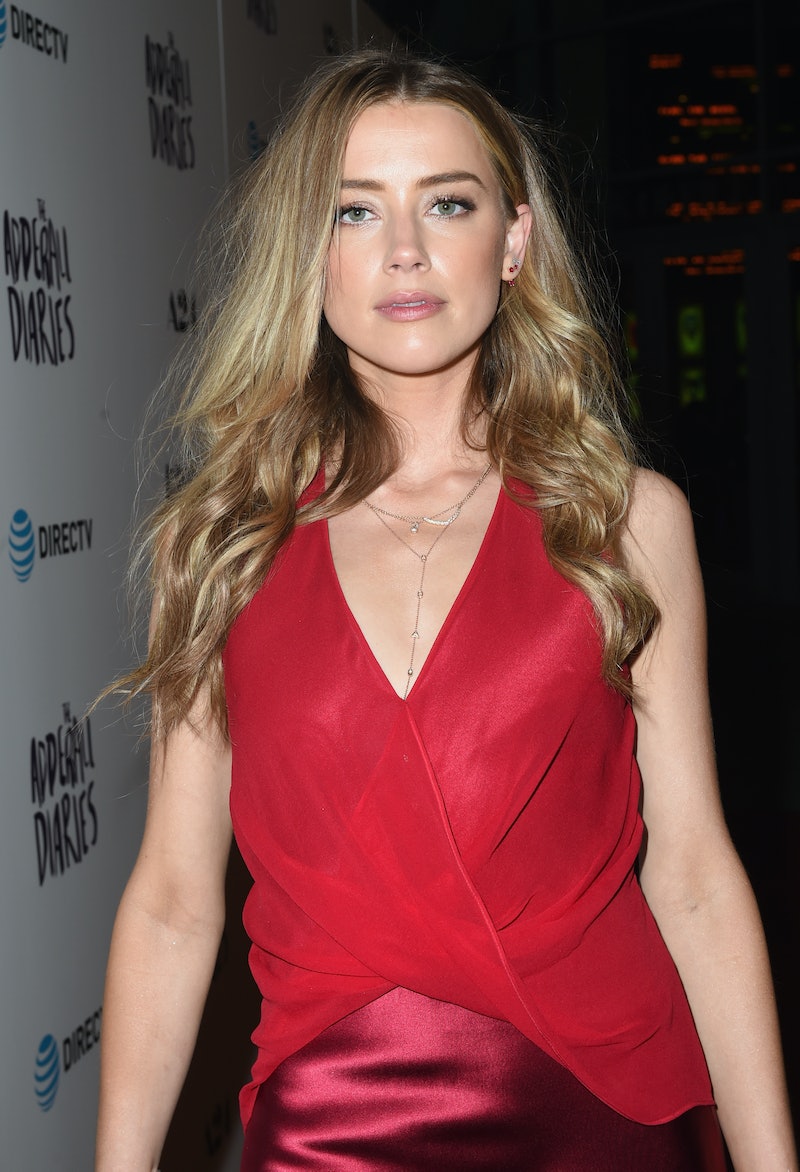 Ever since news broke of Amber Heard and Johnny Depp's divorce, the couple has been in the spotlight. At the end of May, a judge granted Heard's request for a temporary restraining order against the actor following her allegations of domestic violence. Heard's claims have become a source of widespread speculation, and although only the pair can know truth, that's no excuse for the disappointing comments that have been hurled Heard's way. Realizing that enough is enough, Heard's friend iO Tillett Wright wrote an eye-opening essay for Refinery29 titled "Why I Called 911." Although some parts are hard to stomach, it's well-worth a read. Perhaps the most powerful part is that Wright doesn't mention Heard or Depp by name, but based on context, the essay is almost certainly references the famous former couple.

Bustle has reached out to reps for Heard and Depp for comment on the essay, but has not yet heard back.

Depp has denied the allegations of domestic abuse through his lawyer. According to People, after Heard filed for the restraining order, Depp's lawyer, Laura Wasser, claimed, "Amber is attempting to secure a premature financial resolution by alleging abuse." Before the allegations came to light, Depp's lawyer released the following statement about their divorce:

Even with Wright not naming names, it's certainly not a leap to believe the essay is about Heard and Depp, considering that two days prior to its publication, Wright tweeted support for Heard. One tweet included a link to a TMZ story about how witnesses allegedly saw no facial bruises on Heard. Along with the link, Wright wrote, "BULLSH*T. I've had enough. I saw the bruises. Many times. And the fat lip. And the cut head."

In the essay, Wright wrote,

Right now, every battered woman in the world is watching this media circus, internalizing the message that when they come forward for help, when they break the cycle, they will be called a gold digger, a cheater, and be accused of having faked it all for attention.

As illustrated in this quote, the way in which some people are reacting to Heard's allegations, by immediately assuming that she is lying, is not only disappointing, but can serve as a reflection of society's reaction to domestic violence claims in general. If the public is so quick to dismiss the accusations from Heard — an actor, married to another actor — what chance does an ordinary, non-celeb have to be taken seriously if he or she chooses to come forward with his or her own claims?

So while the essay is likely about Depp and Heard, the message extends beyond Hollywood. Wright's strongest point is "No person, ever, should suffer violence at the hands of the person they love." That's an important idea that can't be repeated enough.

But Wright also acknowledges how hard it can be to come forward with claims of this nature. Wright writes about viewing the alleged abuser like a brother and how hard it was to reconcile that: "He had been my friend, too, a person I loved very much. A person I had once referred to as a brother... I didn’t want to believe it either, until I saw the wreckage." But as Wright goes on to explain, "When you call someone your brother, you also commit to calling them out when they are wrong."

Adding in disturbing details, Wright claims in one instance to have found the woman (heavily implied to be Heard) with a busted lip and clumps of hair on the floor:

The reports of violence started with a kick on a private plane, then it was shoves and the occasional punch, until finally, in December, she described an all-out assault and she woke up with her pillow covered in blood. I know this because I went to their house. I saw the pillow with my own eyes. I saw the busted lip and the clumps of hair on the floor. I got the phone call immediately after it happened, her screaming and crying, a stoic woman reduced to sobs.

It shouldn't take someone like Wright spelling out instances of an alleged abuse to keep people from immediately dismissing any person's claims of abuse, but all too often, those who claim to be victims are treated this way. And while Wright's essay seems to be about Depp and Heard's relationship, in reality, it carries a more universal message — about how to be an ally to someone who claims to have been a victim of abuse as well.