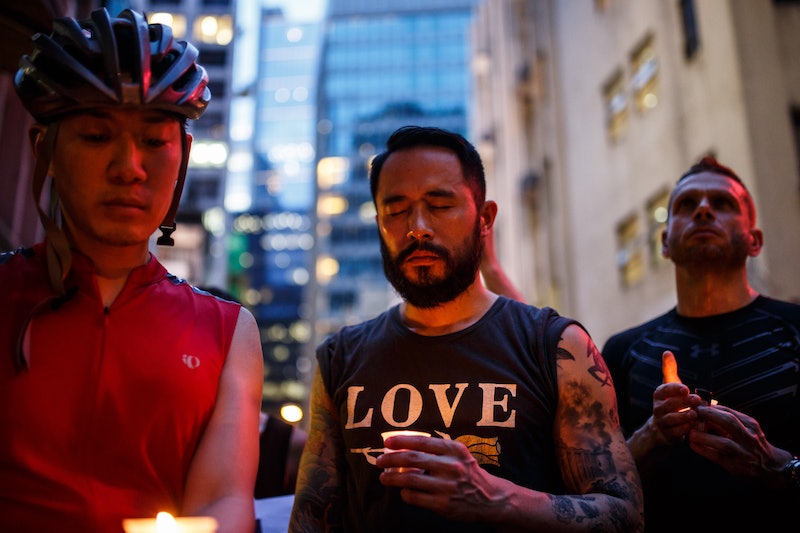 As the world struggles to come to terms with the horrific events that unfolded in Florida this weekend, the city of Orlando has begun releasing the names of the 49 innocent victims killed when a gunman opened fire at the LGBTQ nightclub Pulse. In a press conference on Monday morning, officials also confirmed 53 others were injured in the early Sunday attack. The weight of the tragedy is crushing, and in an effort to make sense of the event, many are struggling to find the words the describe what it is. But as a tweet from Nick Confessore, a political reporter for The New York Times and MSNBC contributor, points out, categorizing the horrific event as one thing, and one thing only, is a mistake: It is deadliest attack on a specifically gay gathering in U.S. history; it is also the deadliest mass shooting in recent U.S. history; it is being described by police as a terrorist incident; it may be a hate crime, although whether it is hasn't yet been determined by authorities; and ultimately, it is possible for the Orlando shooting to be all of these things, and many more — not just one of them.

In the din of confusion immediately following the attack, details trickled in. The attack occurred on Latino night at the Pulse, which was founded as a tribute to the owner's late brother, who was gay. (The gunman, who was killed during a violent stand-off with police, was an individual by the name of Omar Mateen, 29, of Fort Pierce, Florida. He had been investigated by the FBI twice — in 2013 and in 2014. Shortly before the massacre, he had called 911 and pledged allegiance to ISIS. ISIS later claimed responsibility for the event.)

The response to the shooting has been divisive, with various camps of our current heightened political climate clamoring to assign the attack to a specific platform or agenda. Officials have declared they are investigating the incident as an act of terrorism, while the LGBTQ community reels from the targeted attack on LGBTQ people in general and on LGBTQ people of color specifically.

It is this impulse to categorize this act of violence that led Confessore to tweet a particularly imperative point:

Hate doesn't play by the rules. Hate doesn't care about our labels. It is ugly and messy and insidious. And these types of hate — terrorism, mass shootings, and the targeting of specific groups of people — are not mutually exclusive. The attack at Pulse can be all three, and it might be many things more. It is not an either/or situation.

As President Obama said when he addressed the nation from the White House, "We know enough to say this was an act of terror and act of hate." The involvement of ISIS pushes the conversation into the forum of terrorism. But, by the very definition of the word, this wasn't just an act of radical religious terrorism: Terrorism is defined as "the use of violent acts to frighten the people in an area as a way of trying to achieve a political goal." The LGBTQ community was targeted specifically and violently. It matters that this happened at a gay bar — meant to be a place of safety for a marginalized group — on Latino night. These details cannot be swept under the rug of radical terrorism, for this act of terrorism was design to frighten and suppress a very specific subset of the population.

When did we, as a people, become so myopic? How do we not see that the Orlando shooting can be, and was, more than one thing? Why do we feel the need to qualify it in such a way that only one type of hate applies? This isn't a metaphorical game of rock, paper, scissors. Many lives were lost and, while the nation as a whole undoubtedly mourns those losses, there are a few very specific communities whose pain we cannot begin to comprehend. The LGBTQ community. Queer people of color. The Latinx community. The Muslim community. Creating a narrative that excludes any of those groups would be remiss.

There are those who would argue Confessore is misguided — that you must pick "the right one" in order to design an effective response strategy. As if that notion isn't troubling enough — that this act of terrorism exists in a vacuum which renders any type of hate the "right" type — it means those people are missing the other salient point of Confessore's tweet. There is no pressing need to pick "a flavor of horror" right now.

Right now should not be a time for telling those deliberately victimized by this act of violence that their identity is irrelevant, but rather, for amplifying their voices. Right now should be a time for — as Bustle's Mariella Mosthof wrote — giving the voices marginalized by this tragedy the space to articulate their suffering. Right now should be a time for enveloping those directly affected by this senseless act in love and support. Here are some ways to help the Orlando shooting victims and their loved ones; you can also donate to the victims' fund, as well as express your solidarity with the LGBTQ community by posting a tribute online. You can also attend a vigil near you to honor the victims.